1Department of Gastroenterology and Hepatology, , .

2Department of Gastroenterology and Hepatology, , .

Aim: The aim of the present study was to evaluate the characteristics of the magnetic resonance imaging features of hepatocellular carcinoma (HCC) that developed early after the eradication of hepatitis C virus (HCV) by direct-acting antiviral (DAA) treatment.

Methods: This study included 26 patients who achieved sustained viral response with DAA and developed HCC thereafter within one year (DAA-SVR HCC). The radiologic characteristics of these patients were evaluated by contrast-enhanced magnetic resonance imaging, including diffusion-weighted imaging (DWI) and T2-weighted imaging (T2WI). For comparison, 80 HCC patients with positive HCV RNA (HCV-positive HCC) were included. Among 42 patients where tumor biopsy was available, histological grade and radiologic findings were compared.

Conclusion: High intensity on DWI and hyperintensity on T2WI were distinctive features of HCC that developed within one year after the end of DAA treatment.

Hepatocellular carcinoma (HCC) is one of the most common cancer types[1] and the major cause of cancer-related deaths[2]. Chronic liver disease and cirrhosis are closely associated with the development of HCC[3]. In patients with chronic hepatitis C virus (HCV) infection, sustained viral response (SVR) can be observed in more than 90% of the cases by antiviral therapy using direct-acting antivirals (DAAs)[4]. However, it remains controversial whether HCC that developed after the eradication of HCV with DAA regimens differs from those that developed during active infection with HCV. Although the incidence of HCC development may not be suppressed or enhanced by the eradication of HCV with DAA[5], the question remains whether there are differences in the biological characteristics, such as histology or radiologic findings, or the clinical course after curative treatment. Imaging features of HCC after SVR with DAA have not been studied in detail.

For the diagnosis of HCC, contrast-enhanced magnetic resonance imaging (MRI) using gadolinium ethoxybenzyl diethylenetriamine penta-acetic acid (Gd-EOB-DTPA) is often used[6-9]. MRI has an advantage over computer tomography (CT) in that various images, including diffusion-weighted images (DWI) or T2-weighted images (T2WI), can be obtained in addition to the vascularity information of HCC nodules. DWI is imaging associated with the restriction of water molecule movement and reflects the histopathologic features of organs and tissues by virtue of high scan speed. It is widely known that DWI is valuable for the diagnosis and differential diagnosis of neoplasm in the liver, including small (< 2 cm) HCC[10]. In this study, we evaluated the MRI features of HCC that developed within one year after the end of DAA treatment.

In our hospital cohort, 695 patients with chronic hepatitis C were treated with DAA regimens and achieved SVR between October 2014 and September 2016. At baseline and after SVR, the surveillance for HCC was performed using ultrasonography, contrast-enhanced CT, or EOB-MRI. Among these 695 patients, 26 patients developed HCC within one year after the end of DAA therapy (DAA-SVR HCC). All of these patients had no previous history of HCC treatment. For comparison, 80 HCC patients with positive HCV RNA (HCV-positive HCC) were selected from 208 consecutive HCC patients with HCV infection who were treated for the first time from December 2011 and February 2018 according to the following inclusion criteria: (1) HCV RNA positive at the time of HCC diagnosis; (2) Child-Pugh A; (3) tumor diameter ≤ 3 cm and number of nodules ≤ 3; (4) no vascular invasion and no extrahepatic metastasis; (5) EOB-MRI available; and (6) radiofrequency ablation (RFA) was performed. This study was conducted according to the ethical principles of the Declaration of Helsinki and STROBE guidelines. This study was approved by the Ethics Committees of Musashino Red Cross Hospital (approval number 28077).

The radiologic diagnosis for HCC was based on the Japan Society of Hepatology[11], the American Association for the Study of Liver Disease[12], and the European Association for the Study of the Liver[13] guidelines. Typical radiographic findings on dynamic study (CT or MRI) or needle biopsy were used for diagnosis. Magnetic resonance examinations were performed in all patients using a 1.5 T scanner (Signa Excite HD; GE Healthcare, USA). Gd-EOB-DTPA was used as a contrast agent. The contrast material was administered as a bolus at a dose of 0.1 mL/kg body weight at a rate of 2 mL/s followed by flushing with 20 mL saline solution using a power injector. Images of the arterial phase, portal venous phase, late phase, and hepatobiliary phase (HPB) were obtained 18 s, 60 s, 150 s, and 20 min after the peak time, respectively, after contrast injection. DWI was acquired before HPB with b values of 0 and 1000 s/mm2. Apparent diffusion coefficient (ADC) maps were obtained automatically by two images of b values of 0 and 1000 s/mm2. Dynamic CT scan with a section thickness of 2 mm was performed. For triple-phase dynamic CT scans, arterial, portal, and equivalent phases were set at 35, 70, and 150 s, respectively, after injection of the contrast agent. Board-certified radiologists diagnosed HCC based on typical patterns, such as an early-phase hyperattenuation area and a late-phase hypoattenuation area on dynamic study. Pathologic diagnosis was confirmed by a certified pathologist who was unaware of the patient’s clinical data.

RFA was percutaneously performed by using local anesthesia. We used an internally water-cooled 17 G cooled-tip electrode with an impedance-controlled generator (Cosman generator, Cool-Tip System, Radionics, Burlington, MA, USA). When the target nodule was more than 20 mm in diameter, multiple needle insertions and multiple ablations of one nodule were performed.

Comparison of demographics and laboratory data

The imaging features are shown in Table 2. There was no difference between DAA-SVR and HCV-positive HCC in terms of features of arterial phase, late phase, or HPB. In contrast, all DAA-SVR HCC was depicted as high intensity on DWI, whereas only 67.5% HCV-positive HCC was found (P < 0.001). Moreover, high intensity on T2WI was significantly higher in DAA-SVR HCC than in HCV-positive HCC (92.6% vs. 67.5%, P = 0.01). The typical imaging features of DAA-SVR HCC are shown in Figure 1. We also measured the ADC values of HCC lesions on DWI; however, there was no significant difference between the two groups. 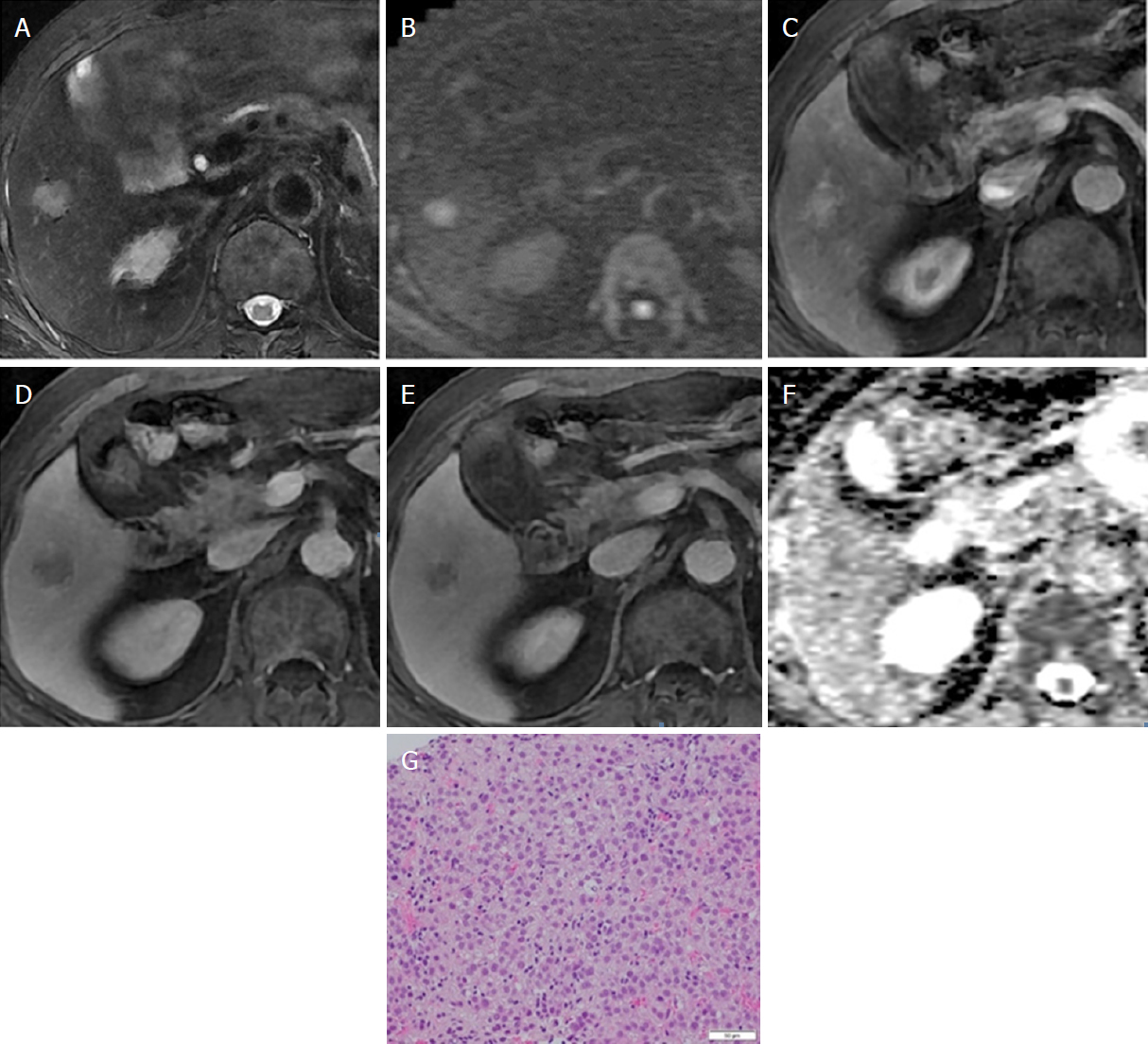 In a report that classified the signal intensity of DWI into three stages (iso/slight, moderate, and obvious) in 254 resected HCC, the prevalence of well-differentiated HCC was high and that of moderately or poorly differentiated HCC was low in the iso/slight intensity imaging group compared to the obvious intensity imaging group: the pathology of well/moderate/poor HCC was 38.9%/57.4%/3.7% for the iso/slight intensity group and 5.8%/77.4%/16.8% for the obvious intensity group[18]. Other reports showed that DWI features were linked to poor differentiation on pathology, vascular invasion, and recurrence risk factor after resection of small HCC[19,20]. Although the number of patients with the information of pathology was small in our study, HCC with high intensity on DWI or T2WI was more likely to have moderately or poorly differentiated HCC compared to well-differentiated HCC. Taken together, these results suggest that high intensity on DWI or T2WI, the characteristic feature of HCC that developed early after the eradication of HCV by DAA therapy, may be the hallmark of the possible malignant phenotype of HCC in general.

Despite having these imaging features of malignant potential, the prognosis of HCC after DAA treatment was comparable to HCV-positive HCC that received curative RFA therapy in terms of OS or PFS. The possible reason for this fair prognosis is that all DAA-SVR HCC was found in the early stage (mean diameter of 18 mm and 81% as single nodule), and actually 25 of 26 patients received curative therapy (resection or RFA in 23 patients and transcatheter arterial chemoembolization with curative consent in 2 patients). However, if these patients were found in a more advanced stage, the prognosis may have been worse due to rapid progression or by the inability to receive curative therapy. Mariño et al.[21] recently reported that HCC incidence was 3.73 HCC/100 person-years in 1123 cirrhotic patients treated with interferon (IFN)-free regimens and 72 patients developed HCC within a median of 10.3 months after starting antiviral treatment. Although some large-cohort studies and systemic reviews revealed that there were no significant differences in hepatocarcinogenesis after achieving SVR between patients treated with IFN and those treated with DAAs, there are still unknown mechanisms involved in the increased risk of HCC emergence in IFN-free regimens. Yoshimasu et al.[22] reported that the HCC occurrence rate after DAA treatment was very low and the recurrence rate was lower than that in previous IFN reports.

The AFP level and AFP-L3% were identified as important factors in predicting the occurrence/recurrence of HCC; thus, patients with such levels are still at risk of developing cancer after SVR. Villani et al.[23] reported that DAA administration induced an early increase in serum vascular endothelial growth factor (VEGF) and a change in the inflammatory pattern, coinciding with HCV clearance. Debes et al.[24] identified a set of 12 immune mediators whose levels were significantly higher in serum before DAA treatment of patients who eventually developed de novo HCC compared to controls. A panel of nine cytokines, measured in serum before treatment (MIG, IL22, TRAIL, APRIL, VEGF, IL3, TWEAK, SCF, and IL21), identified patients who developed de novo HCC with an area under the receiver operating characteristic curve value higher than 0.8. Further analyses of the mechanism also provide important information about HCV-induced carcinogenesis and the effects of DAAs. In this study, we focused on the HCV status; however, HCC recurrence and overall survival are associated with multiple factors including liver fibrosis, immune status, life style, and comorbidities.

Several studies revealed that the ADC value was a predictive factor of the histological grade of HCC[25-27]. However, in this study, we could not find a significant difference in ADC values between DAA-SVR and HCV-positive HCC. In contrast to these studies that included patients who received resection or transplantation, our patients had a smaller size of HCC, which led to inaccurate quantification values due to technical error.

There are some limitations in this study. The sample size was small and this study was conducted in a single center. DAA-SVR HCC patients received HCC screening within six months before administration of DAAs; however, the imaging modality was not uniform, including CT, MRI, or ultrasound. Therefore, we could not definitely exclude the possibility that small hepatic nodules that could be detected only by HPB of EOB-MRI were missed in some patients before DAA treatment. Tumor biopsy was performed only when the patients agreed to the procedure and the location of the tumor was not near large vessels, liver surface, and other organs. Therefore, the correlation between pathological and MRI features should be evaluated in a large cohort in which patients received liver resection.

Our study is the first to reveal the significant differences in MRI findings between DAA-SVR and HCV-positive HCC. According to our results, HCC that develop within one year after the end of DAA treatment would have unique imaging features that may be linked to malignant phenotype if not found and treated early. Today, most patients with HCV infection can achieve viral eradication with DAA therapy. However, in high-risk patients such as those with cirrhosis, the surveillance of HCC should be done at early time points after SVR to diagnose HCC at an early stage and curatively treat it with resection, RFA, or microwave ablation, which may lead to better OS in these patients.

Made substantial contributions to conception and design of the study and performed data analysis and interpretation: Shimizu T, Tsuchiya K, Kurosaki M

The original raw data used to support the findings of this study have not been made available because of the risk that will come into conflict with Personal Information Protection Law in Japan.

This study was approved by the ethical committee at Musashino Red Cross Hospital (approval number 28077).