The secondary prevention of hepatitis B virus-associated hepatocellular carcinoma

Primary liver cancer can be classified into three categories according to different pathological types: hepatocellular carcinoma (HCC), intrahepatic cholangiocarcinoma (ICC), and combined HCC-ICC. Among them, HCC accounts for more than 85%-90%. Therefore, the term “liver cancer” in this article refers specifically to HCC. Due to an insidious onset and no symptoms in the early stage of HCC, as well as lacking of awareness of disease screening of patients with HCC, they go to hospital only when the symptoms are vivid and diagnose with advanced HCC with a survival period of three to six months. For this reason, HCC was once known as “the king of cancer”. Clinically, we have noticed that most patients with HCC have a natural history of acute hepatitis B virus (HBV) infection - chronic hepatitis B (CHB) - liver cirrhosis (LC) - HCC, which shows that HBV infection is closely related to LC and HCC. According to the statistics, more than two billion people worldwide have been infected with HBV, and 240 million of them are CHB. Over 650 thousand people die every year from liver failure, LC and HCC caused by HBV, and 60% LC and 80% HCC are HBV-related[1]. The major hazard of HBV infection is considered to be chronic infection, which plays an important role in hepatocellular carcinogenesis. Hepatic fibrosis and LC are susceptible in CHB, which may eventually lead to the occurrence of HCC.

Since the implementation of planned immunization in China, the number of CHB patients has dropped steadily, while the stock of that is still large. For the carrying rate of hepatitis B surface antigen (HBsAg) in general population is estimated to be 7.18%, it is calculated that about 93 million people are chronically infected with HBV, about 20 million of whom are CHB patients. According to the natural history mentioned above, if these people do not receive whole course management and standard treatment, nearly 700 thousand people will develop into HCC in 8-10 years later.

There may be two possible modes of HBV carcinogenesis: one is viral oncogene mode, that is, after the body is infected with HBV, HBV will integrate into the host genome by incorporating its own genes into the nucleus of hepatic cells, thus transforming normal hepatic cells into cancer cells[2-4]; the other is the cellular oncogene mode, that is, viral DNA will integrate into or rearranges with DNA of its host to produce HBV-activated genes or proto-oncogenes, leading to the transformation of normal cells into cancer cells and ultimately the development of HCC[5,6].

It is not impossible to prevent HCC. If we can take intervention measures at the stage of CHB to prevent the disease progression to a great extent, it is impossible to prevent a considerable number of patients with CHB from developing into LC or even HCC. This article will focus on the secondary prevention of HBV-related HCC-early detection, early diagnosis, standard antiviral treatment, and whole-course management - to show its importance and clinical significance.

Screening of high-risk groups of HBV-associated HCC is helpful for early detection and diagnosis. Currently, it is known that the high risk factors closely lead to the progression of HCC in patients with CHB mainly include: hepatitis B e antigen (HBeAg) positive, genotype C HBV, high HBV DNA load, long-term intake of a lot of alcohol, people with LC basis and a family history of HCC, especially men over 40 years old and so on. Regular physical examinations should be carried out in high risk population. Regular examination of liver function, HBV serological tests, HBV-DNA load, AFP, abdominal ultrasound, and non-invasive liver fibrosis detection and the like every three to six months, enhanced CT test or nuclear magnetic resonance (MRI) should be further examined in suspected patients, in order to detect small HCC early. Early surgical resection and other radical treatment can improve the cure rate of HCC and prolong the life cycle of patients as far as possible.

Thus, a whole course management should be conducted in patients with high risk of HCC starting from the discovery of HBsAg positive, including chronic HBV carriers, non-active HBsAg carriers, HBeAg-positive and negative CHB patients, and HBLC patients in compensated and decompensated periods. As for the chronic HBV carriers and non-active HBsAg carriers, blood routine, biochemistry, HBV serological tests, AFP and the like should be monitored every 3 months, abdominal ultrasound, computed tomography (CT) or non-invasive liver fibrosis detection should be carried out every 6 months, and liver biopsy should be conducted if it is necessary. If antiviral treatment indications are met, treatment should be started in time. For HBeAg-positive CHB patients, after 3-6 months of observation, antiviral treatment could be started if alanine aminotransferase level continued to rise and there was no spontaneous HBeAg serological conversion. On the contrary, for HBeAg-negative CHB patients, antiviral treatment should be started as soon as possible if they meet the indication. For patients with HBLC, antiviral treatment should be initiated immediately [Figure 2]. After starting antiviral treatment, patients should be followed up regularly by telephone, text message, email, WeChat and other methods. Patients with hepatitis B cirrhosis should be reminded to examine HBV-DNA load, HBV serological tests, liver function, AFP and the like every 3 months. Abdominal ultrasound or CT test should be carried out every 6 months. Once the intrahepatic small nodules are found, and if the diameter of the nodules is larger than 1 cm, contrast-enhanced ultrasound and enhanced MRI should be performed to determine whether it is a small liver cancer. Once the diagnosis of small liver cancer is confirmed, surgical operation should be performed immediately. However, if the diameter of the nodules is smaller than 1 cm and unable to confirm diagnosis by imaging examination, closely follow-up should be performed instead, including monitoring abdominal ultrasound or CT test every 3 months. Once the intrahepatic small nodules are found to become bigger progressively, take intervene according to the above procedure. If no small intrahepatic nodules are found by imaging examination, abdominal ultrasound or CT test should be continued monitoring every 6 months. Once intrahepatic small nodules are found, interventions should be actively taken according to the above procedure. Patients with small liver cancers which are found early, after surgical operation, should be reminded monitoring abdominal ultrasound or CT test every 3 months. Once there is a possibility of recurrence of liver cancer, contrast-enhanced ultrasound and enhanced MRI should be performed, and surgical intervention should be taken immediately after diagnosis. Regular follow-up should be continued after surgery, repeatedly. Treatment plans should be adjusted in time once drug resistance and side effects occur during the follow-up period, and the biochemical and virological examinations should be performed in the 1st and 3rd months after the adjustment of the therapy, and continue to maintain regular follow-up every 3 months thereafter. Doctor-patient interaction should be advocated to supervise patients to continue taking antiviral drugs if they were found to stop taking medicines. At the same time, patients should be educated on the knowledge of hepatitis B to improve their understanding of the disease [Figure 3]. Through all the managements mentioned above, in our follow-up cohort, about 70% of HCC patients were found only with small HCC, and all of them received timely surgical resection and treatment, and continued to follow up postoperatively, so as to achieve the goal of early detection, early diagnosis, and early treatment. 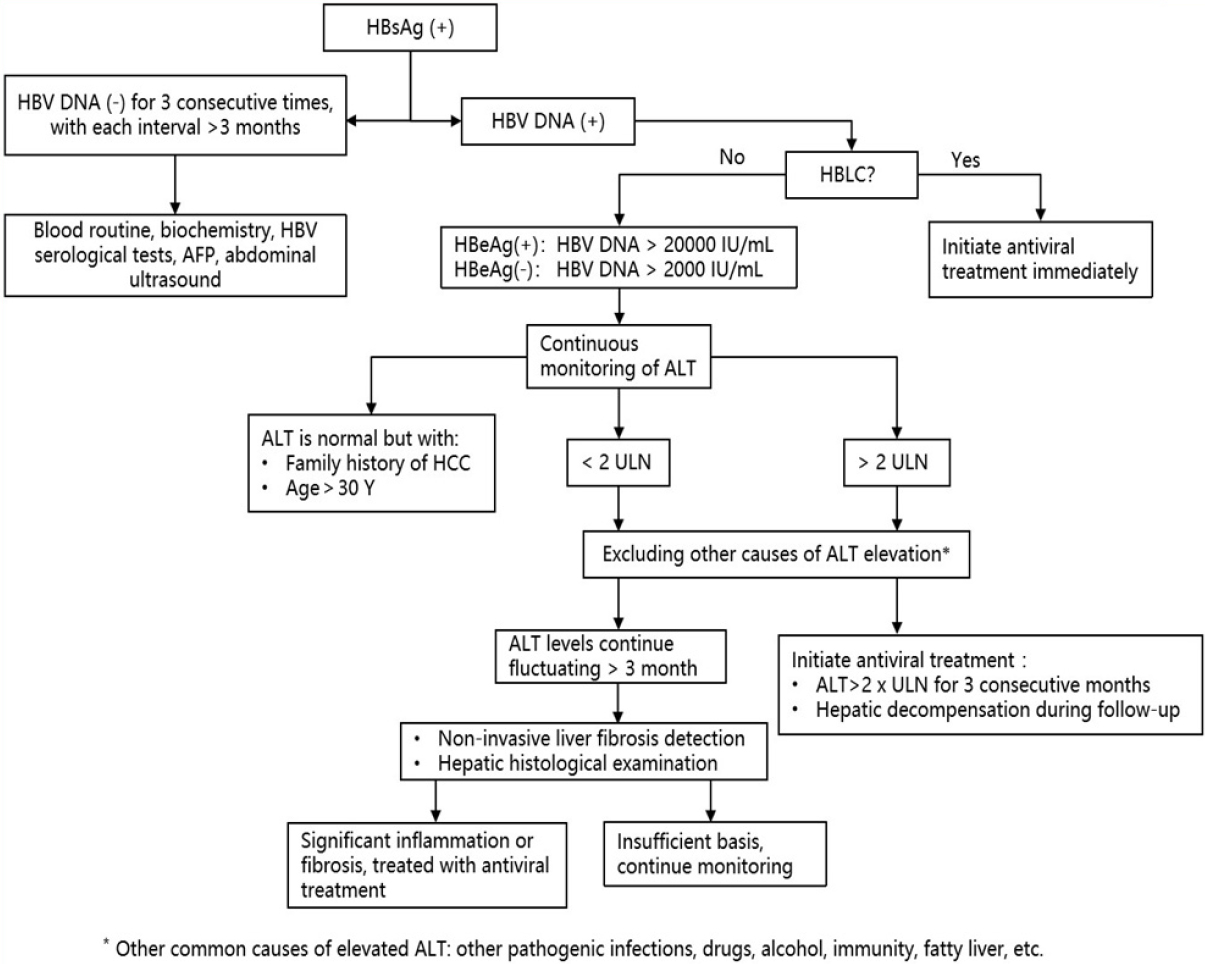 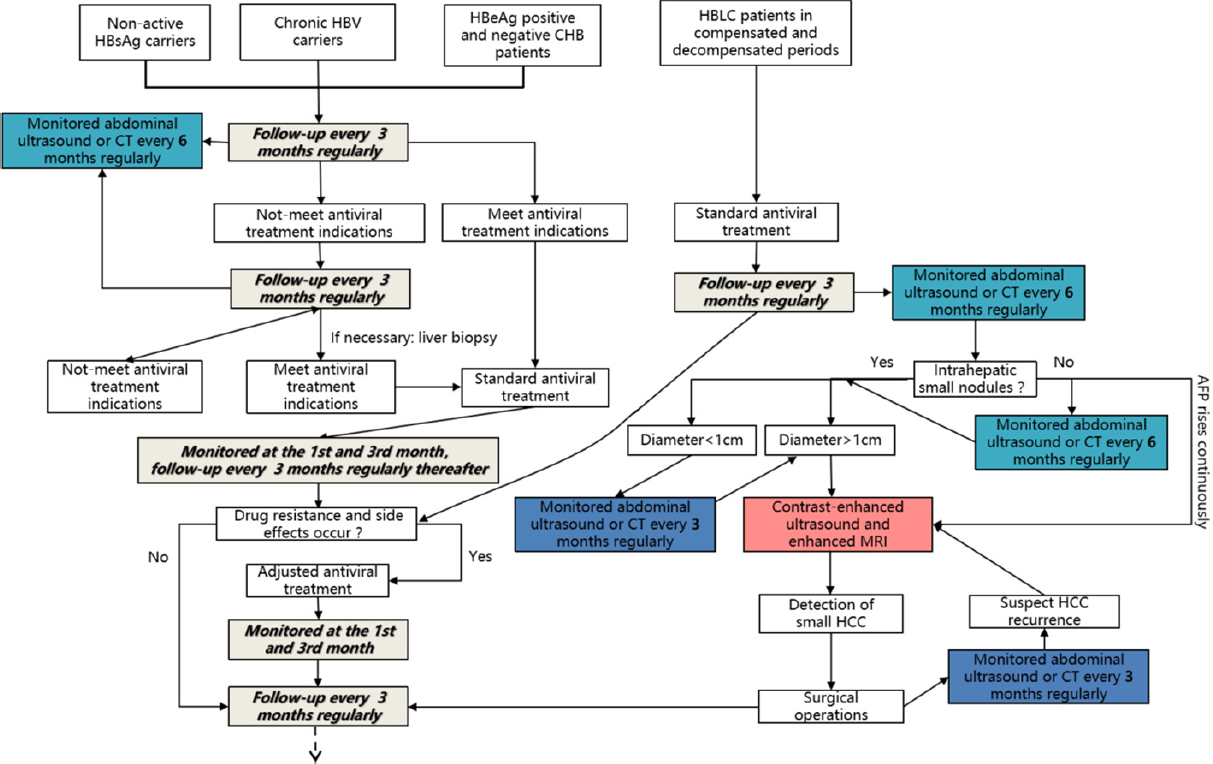 Secondary prevention of HBV-associated HCC plays a key role in reducing the incidence of HCC, finding the occurrence of small HCC, carrying out early surgical treatments, and prolonging the survival cycle of patients, which deserved to be widely popularized.

Obtained the funding and revised the paper: Jiang JN

This work was supported by grants from Natural Science Foundation of Guangxi Key Laboratory for the Prevention and Control of Viral Hepatitis (GXCDCKL201802) and was funded by Key laboratory of High-Incidence-Tumor Prevention & Treatment (Guangxi Medical University), Ministry of Education (GKE2018-05), and National Science and Technology Major Project of China (2017ZX10202201).