Aim: Chronic persistent hepatitis B virus carriers are generally asymptomatic until the advanced stage of the disease. The “Hepatitis B-Carrier Clinics” of Chang Gung Memorial Hospital has been using alpha-fetoprotein (AFP) and liver ultrasound for early detection of hepatocellular carcinoma (HCC) in hepatitis B surface antigen (HBsAg) carriers since 1980.

Methods: We evaluated the results of surveillance between 1980 and 2012 by collecting clinic data, matched cancer registry status, and national mortality database status.

Conclusion: The incidence of HCC was relatively low in the HBsAg-Carrier Clinics cohort. Surveillance for early diagnosis of HCC improved the survival of high-risk HBsAg carriers. To ensure cost-effectiveness, we suggest using different screening strategies according to the individual risk of hepatocarcinogenesis.

Chronic persistent hepatitis B virus (HBV) infection is a global disease, and its prevalence is highest in Africa and East Asia[1-4]. The chronic relapsing inflammation caused by HBV leads to chronic hepatitis, liver cirrhosis, and hepatocellular carcinoma (HCC)[4]. Patients with HBV are generally asymptomatic and unaware of their illness until they reach the advanced stage. Early diagnosis of HCC through periodic surveillance has become one of the strategies for management of chronic hepatitis B surface antigen (HBsAg) carriers[5-7]. Diagnosis of HCC in the early, treatable stages leads to improved survival[7,8]. This is especially important for areas with endemic HBV infection[1-3,9]. The methods for early detection of HCC mainly rely on alpha-fetoprotein (AFP), AFP-lectin 3 fraction (AFP-L3), des-γ-carboxy prothrombin, and liver ultrasound (US)[5-8,10,11]. Many new biomarkers are under investigation[12-14], but they appear to be more expensive and were not found to be significantly superior to AFP and US in a large population survey[15].

In addition to detection tools, a number of other variables, including duration of surveillance, individual risk, and patient attitude, may also contribute to the effectiveness of surveillance. We have been performing surveillance for early detection of HCC in a hepatitis B carrier clinic for more than 30 years[5,6]. This analysis was conducted to assess our results and to improve our surveillance strategy.

The HBsAg-Carrier Clinics of Chang Gung Memorial Hospital in Taipei and Linkou Medical Centers have been in operation since 1980, and they provide an easily accessible service for chronic HBsAg carriers in Taiwan. Most patients who visit the HBsAg-Carrier Clinics are asymptomatic upon entry. They visit the clinics because the presence of HBsAg has been incidentally detected upon blood donation, in a general check-up, or in a work-up for a non-liver-related disease, or they are referred from our outpatient department as stable HBsAg carriers with normal alanine aminotransferase (ALT).

A total of 15,235 HBsAg carriers with persistent HBsAg for more than six months had been registered in the HBsAg-Carrier Clinics by 2012. Patients with dual infections were excluded. The subjects underwent 275,324 visits and had a mean follow-up duration of 10.0 ± 7.65 years. Upon registration with the clinic, the subjects underwent liver biochemical tests and testing for serologic markers of hepatitis viruses, AFP, and real-time liver US. After this initial visit, the subjects were followed-up every 3-12 months, with ALT, AFP, and US as the basic measures.

This HBsAg-Carrier Clinics has three full-time clinic staffs and a private line telephone to arrange registration and visits. The clinic staffs recorded basic information, delivered patient education, collected data from each visit, and entered these data into the hospital’s main computer. One of the main aims of this clinic is to detect HCC at the early stage. For patients unable to keep up with the follow-up schedule, reminder letters are sent.

In this study, we examined data from the HBsAg-Carrier Clinic from 1980-2012. This long-term follow-up analysis of chronic HBsAg carriers was approved by the human research committee of Chang Gung Memorial Hospital (IRB No: 201600523B0).

One of the main aims of this study was to determine the incidence of HCC in this cohort. Diagnosis of HCC was ascertained based on cytology or histology reports. We also included subjects with at least two findings from the AFP, liver US, computer tomography (CT), magnetic resonance imaging (MRI), and angiography tests indicating they were positive for HCC[16]. In addition, disease progression based on one imaging-modality study was accepted as a diagnosis of HCC.

In addition to the medical records maintained in this clinic, the study subjects had linked records in the Cancer Registration Database of Chang Gung Memorial Hospital. This database contains all information recorded about all cancers diagnosed or treated at this hospital since 1987. We linked our cohort with this database to retrieve all HCC cases identified between 1987 and 2007 in other departments.

The subjects’ national identification numbers were also linked with our national mortality database, which has been maintained by the Statistics Office of Taiwan’s Department of Health since 1985. Cause of death was classified using the ninth revision of the International Classification of Diseases, Injuries and Causes of Death (ICD-9, World Health Organization, 1977). We matched our cohort with this database between 1985 and 2007. For patients lost to follow-up in our hospital, the national mortality database was the only available source of information regarding diagnosis of HCC.

Classification of HCC according to follow-up schedule

To compare the characteristics of the three groups, the χ2 test, Fisher’s exact test, Student’s t-test, linear-by-linear association, Pearson’s correlation, and ANOVA were used as appropriate. Survival analysis was done using the Kaplan-Meier actuarial curve method with the log-rank test. Univariate and multivariate analyses were performed to identify factors associated with mortality and HCC or development of cirrhosis. Variables found to be significant in the univariate models were tested in a multivariate setting using the Cox proportional hazards regression model. All statistical analyses were performed using SPSS software (version 22; SPSS Inc., Chicago, IL) and P < 0.05 was considered significant.

Demographics of chronic HBsAg carriers with and without HCC 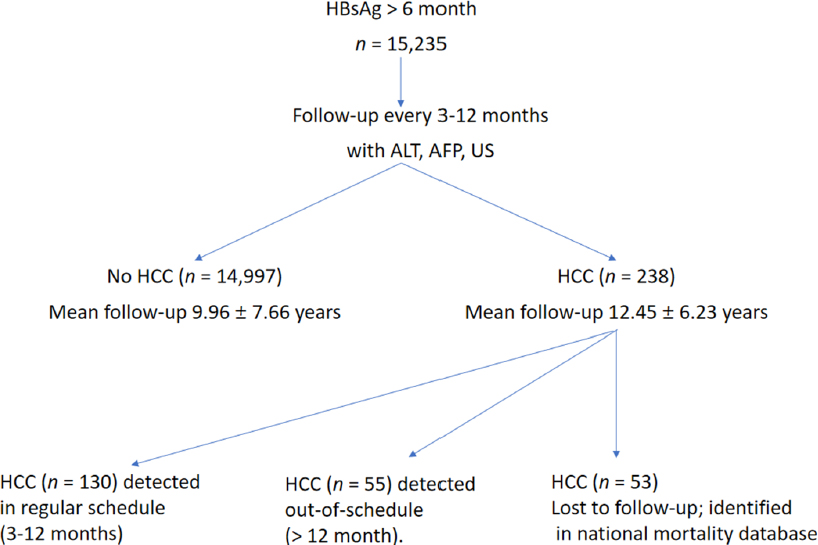 HCC classification according to follow-up schedule

Of the 130 HCC cases detected during regular follow-up, 47 (36.2%) patients had at least one liver nodule identified via US during the three months before the diagnosis. Sixteen (12.3%) of these patients had three or more nodules.

Only 238 (1.5% or 156.2 person-years) HCC cases were identified among 15,235 HBsAg carriers during a mean follow-up of 10 years. The annual incidence of HCC was 0.53% in men and 0.04% in women [Figure 3]. The incidence of HCC in this cohort was relatively low compared with the 826 person-years reported in our previous study of 432 patients with chronic hepatitis B[5]. In general, the incidence in our study is lower than in studies of patients with chronic hepatitis and higher than in studies of inactive carriers[17]. In a study examining HCC-risk stratification[18], the 10-year cumulative risk score for developing HCC was 1.2%-2% when only male sex and subjects aged 50-59 years were considered[18]. The HCC diagnostic age in this cohort was around 55 years [Table 2]. Therefore, our HCC incidence (1.5%/10 years) is within the range of that prediction. HCC screening is cost-effective and is recommended for groups in which annual HCC incidence exceeds 1.5%[19]. Therefore, lifelong screening of all HBsAg carriers for liver cancer would not be cost-effective in this cohort. We do have other reasons for maintaining this clinic, such as screening for chronic hepatitis and liver cirrhosis that require therapy, understanding the history of chronic HBV infection, and others. However, we should focus surveillance efforts on high-risk HBsAg carriers[20]. Without complicated parameters, this study has identified male gender (89.1%), maximal ALT level greater than or equal to 5 × ULN (71.5%), liver cirrhosis (70.2%), and age over 40 at enrollment (95%) as risk factors for HCC (Table 1; logistic regression, P < 0.001). Patients who have these clinical and demographic characteristics warrant active surveillance. 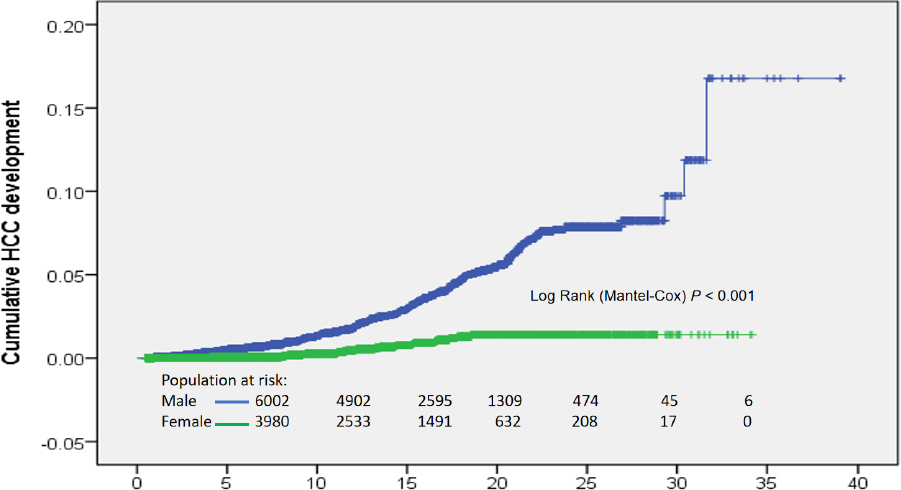 Figure 3. Cumulative hepatocellular carcinoma (HCC) development in men and women. The annual HCC incidence was 0.53% in men and 0.04% in women

A large proportion of the patients were unable to adhere to the follow-up schedule in this cohort. Only 54.6% (130/238) of the HCC cases were identified during the regular follow-up schedule, while 55 (23.1%) were patients who returned with HCC and 53 (22.3%) were patients who had been completely lost to follow-up. This suggests that ongoing surveillance at 3-12-month intervals was difficult to maintain for nearly half of the patients. The results from our single hospital with 15,235 cases are similar to a meta-analysis of 22 reports covering 19,511 cases[21]. In that study, Wang et al.[21] found that the adherence rate to HCC surveillance was only 52%.

The regular follow-up group had a higher survival (43.8% vs. 30.9%) and smaller mean tumor size (2.72 vs. 4.59 cm) than the out-of-schedule group (Table 2; P < 0.001). These results are in agreement with a randomized control study that included 18,816 participants[22]. Zhang et al.[22] found that regular surveillance leads to early detection of HCC, resulting in better survival than in those without surveillance. A recent extensive review confirms surveillance improved survival[23]. There is therefore no doubt that surveillance should be carried out in high-risk HBsAg carriers. The current Asian Pacific Association for Study of the Liver (APASL) guideline specifies that male HBsAg carriers aged greater than 40 years and females aged greater than 50 years are high-risk groups[7]. In our previous analysis, which used a subset of patients from this cohort, we found that the incidence of HCC was relatively low if the initial ALT level was lower than 2 × ULN or if the patients maintained persistent normal ALT[23,24]. In this study, 72.6% of chronic HBsAg carriers without HCC had initial ALT levels lower than 2 × ULN, and 69.3% had maximal ALT levels lower than 5 × ULN. In contrast, 63.5% HCC patients had initial ALT levels greater than or equal to 2 × ULN and 71.5% had maximal ALT levels greater than or equal to 5 × ULN. Therefore, we might not encourage patients with persistent ALT levels lower than 2 × ULN, no cirrhosis, female gender, or age under 40 years to receive early full surveillance. Repeated negative findings during regular follow-up visits may cause the patient to feel it is less necessary to continue surveillance. For such patients, we may continue with simple ALT and AFP surveys. Full surveillance, including HBV viral load, US, elastography, or new markers may then be started once a risk factor is identified. Active call-back mechanisms focusing on these high-risk patients will be mandatory.

The prevalence of liver cirrhosis was relatively high (70.2%) in patients with HCC. In addition, lesions resembling liver regeneration nodules were found in 47 (36.2%) patients preceding HCC diagnosis. Of these, 16 (12.3%) had three or more nodules. These preexisting findings decreased the likelihood of early diagnosis of HCC. Indeed, cirrhotic nodules have been reported as a problem in the diagnosis of small HCC[25]. New parameters to allow the discrimination of HCC from regeneration nodules will therefore be needed[26-28].

More patients with HCC received treatment than those without HCC (Table 1; P < 0.001). This could be because active viral replication is typically associated with HCC[29,30]. Since the treatment regimens were complicated, whether anti-HBV therapy decreased the incidence of HCC could not be evaluated in this study.

We conclude that surveillance for early diagnosis of HCC improved the survival of high-risk HBsAg carriers. Most HBsAg carriers are low-risk and can be screened using simple parameters, such as periodic AFP and liver biochemistry tests at 6-12-month intervals. When risk factors appear during this follow-up schedule, we may then add US, elastography, or other new markers for early diagnosis of HCC in high-risk patients.

We would like to thank Uni-edit (www.uni-edit.net) for editing and proofreading this manuscript.

Designed the study and wrote the manuscript: Tai DI

The data source is from Carrier Clinics of Chang Gung Memorial Hospital. Please contact the author through E-mail for information if necessary.

This research was supported by the grant from Chang Gung Memorial Hospital (CMRPG3E1121 and CIRPG3H0021).