Multiple primary malignancies (MPMs) is a phenomenon that has been described in the literature for nearly a century[1]. The frequency of MPMs has increased over time, which has been partly attributed to improved surveillance and treatment options for cancer. Notably, a similar uptick in cases of second primary malignancies occurring in those with HCC has also been observed[2]. This is particularly enlightening that HCC has typically carried a grim prognosis as the third leading cause of cancer mortality worldwide[3].

The present case report describes a patient with chronic hepatitis B, who sequentially developed bladder cancer, HCC, and lung adenocarcinoma. His complex sequence of diagnostic evaluations and therapeutic interventions are first discussed, providing context for a review of the literature on MPMs involving HCC.

A 40-year-old Asian man initially presented to an outpatient office in 1987 with a chief complaint of chronic fatigue for several months. There was no family history of malignancy or hepatitis B. He was found to be positive for the hepatitis B surface antigen [HBsAg (+)]. He initially had an elevated alanine aminotransferase, but this returned within normal limits on repeat bloodwork. He demonstrated hepatitis B envelope antigen (HBeAg) seroconversion on follow-up labs in 1991. At the time of his diagnosis, no antiviral therapy existed, therefore he was not started on any treatment.

Nine years later, in 2000 at age 53, he developed proteinuria and hematuria and was diagnosed with bladder cancer. He underwent cystectomy with ureterostomy without complication. Three years later, he underwent cardiac angioplasty and stopped smoking cigarettes shortly thereafter. In September 2004 at age 57, abdominal imaging identified a liver mass consistent with HCC (3.4 cm, right lobe, segment 8) with mild medial segment atrophy suggestive of underlying cirrhosis. He was started on lamivudine 150 mg daily and then underwent transarterial chemoembolization (TACE) [Figure 1] followed by radiofrequency tumor ablation. Tenofovir 300 mg daily was then added in May 2010. Hepatitis B virus (HBV) serology at that time demonstrated HBsAg (+), HBeAg (-), anti-HBe (+) with undetectable HBV DNA. 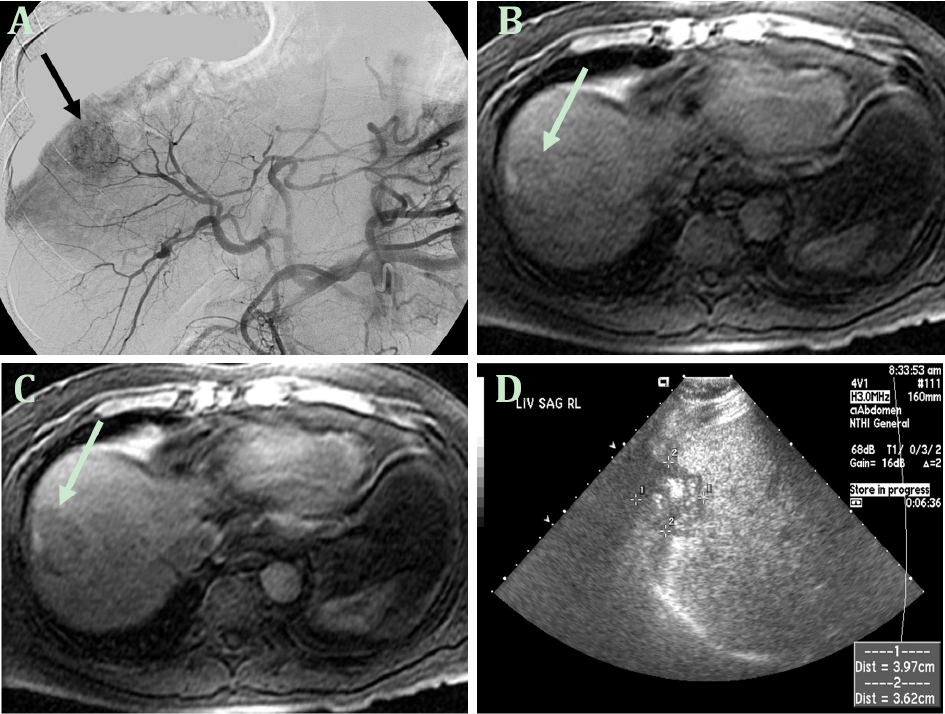 Figure 1. First diagnosis and treatment of hepatocellular carcinoma in 2004. The image from the celiac axis arteriogram in 2004 (A) shows a hyperenhancing lesion (arrow) corresponding to the hepatocellular carcinoma in segment 8; The axial T1-weighted fat-suppressed precontrast image (B) following chemoembolization shows the lesion (arrow) which fails to enhance on the subsequent postcontrast image (C); The longitudinal ultrasound image (D) shows the hypoechoic treated lesion (marked by calipers) with intralesional echogenic foci, likely reflecting posttreatment changes

Despite continued antiviral therapy and undetectable HBV DNA, an abdominal MRI ten years after initial HCC [Figure 2] in 2014 revealed a new 1.0 cm LI-RADS 5 lesion in segment 7 consistent with recurrent HCC. At that time, liver function tests were normal, alpha-fetoprotein 2.1 and HBV DNA were still undetectable. He underwent TACE on 4/14/2014 and remained on lamivudine and tenofovir.

Figure 2. Recurrence of hepatocellular carcinoma on MRI in 2014. The arterial phase T1-weighted fat-suppressed postcontrast image (A) shows a small hyperenhancing lesion (arrow) in segment 7 and the previously treated lesion in segment 8 (arrowhead); The corresponding portal phase image (B) shows washout and capsule appearance and the findings conform to a LI-RADS 5 observation; the treated lesion fails to enhance (arrowhead). The diffusion-weighted image (C) reveals hyperintensity (arrow), or diffusion restriction, supporting the diagnosis of malignancy

However, three years later, abdominal MR imaging in March 2017 revealed a 0.9 cm liver mass located next to the prior treatment site in segment 7. Follow-up imaging in June 2017 showed that the mass nearly doubled in size to 1.9 cm [Figure 3]. This prompted an evaluation for orthotopic liver transplantation (OLT). During the workup, a chest CT in August 2017 at age 70 showed a lung mass (2.8 cm × 2.4 cm) in the right upper lobe [Figure 4]. A PET scan characterized the lung mass as hypermetabolic and subsequent biopsy showed mucinous adenocarcinoma of the lung. Of note, the patient had a 60 pack years smoking, stopping in 2016. 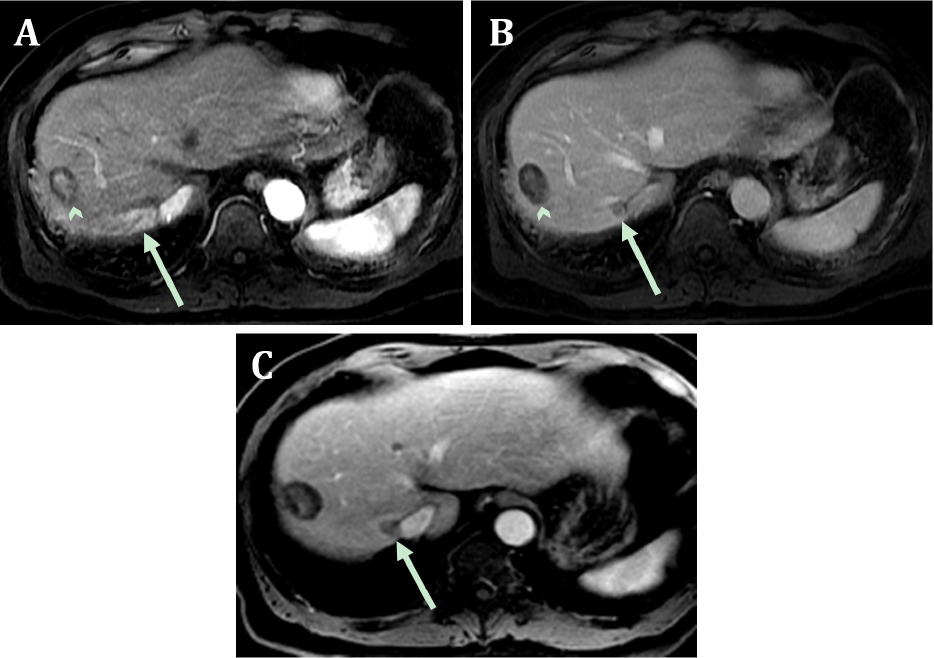 Given this new diagnosis of lung cancer, the patient was no longer eligible for OLT and therapy for both his recurrent HCC and new lung adenocarcinoma was initiated. For his HCC, he underwent TACE on early October 2017 followed by two sessions of CT-guided microwave tumor ablations. He also received five fractions of stereotactic body radiation therapy (SBRT) for his lung adenocarcinoma during this same time period. Unfortunately, surveillance PET scan in April 2018 [Figure 5] revealed a new left-sided paratracheal lymph node that was biopsy-proven mucinous adenocarcinoma representing a recurrence which was wild type for activating genetic aberrations and had a PD-L1 (by SP 263) tumor proportion score of 25%. Concurrent carboplatin and paclitaxel with radiation to the mediastinum was planned. It was delayed for a month per patient request.

Figure 5. Metastasis of lung adenocarcinoma to paratracheal lymph node in April 2018. The axial PET/CT image (A) shows a hypermetabolic left paratracheal lymph node (arrow); The corresponding coronal PET/CT image (B) shows the hypermetabolic lymph node (arrow), as well as the treated segment 8 lesion (arrowhead); H&E stain (400x) of the lymph tissue obtained by fine-needle aspiration (C) reveal sheets of pleomorphic cells with mucin production. This is the same morphology of lung adenocarcinoma seen on prior lung biopsy, thereby consistent with a metastasis from the lung primary tumor

Concurrent chemotherapy radiation was not done as a repeat CT chest in May 2018 to establish a new baseline, which showed a new right-sided lung nodule (1.2 cm) [Figure 6] when biopsied was HCC. This was treated with SBRT. A repeat CT chest July 2018 showed new bilateral lung nodules. A biopsy of a left lung nodule showed HCC metastasis to the lung based on positive immunohistochemical staining for hepatocyte specific antigen, Hep Par-1.

He was started on nivolumab which is active in both hepatocellular and non-small cell lung cancer manifested by the lymph nodes as above. However, after one infusion treatment, follow-up imaging [Figure 7] showed a new right hilar mass compressing the right upper bronchus. Biopsy in August 2018 showed mucinous adenocarcinoma consistent with his known lung cancer. His therapy was then switched to carboplatin, pemetrexed, and pembroluzimab of which he received four cycles with stable disease of the lung mass and the bilateral lung nodules. The patient unfortunately passed away due to complications from aspiration pneumonia.

Sites and years of cancer development in the bladder, liver, lung and metastatic HCC in the lungs are shown in the diagram below. [Figure 8]

Figure 8. Site and time of cancer development in the bladder, liver, lung and HCC metastasis to the lung.

In 1932, Warren and Gates first described and defined MPMs as two or more malignant tumors of different histopathological origin in a single patient[1]. MPMs specifically in patients with HCC were initially characterized as an infrequent occurrence. This was attributed to the fact that the prognosis of HCC was historically poor. However, due to advances in screening and therapeutic options for HCC, there has been an increase in patients with HCC developing extra-hepatic primary malignancies (EHPMs)[2-4].

The most common sites of EHPMs in patients with HCC tend to correlate with the typical distributions of cancers found in different geographic regions. For example, studies with patient cohorts of Asian descent identified gastric and nasopharyngeal cancers as common EHPMs[2-4], whereas studies from Western nations revealed genitourinary and colorectal cancers as the most common EHPMs[8].

In regards to risk factors for EHPMs, studies have found similar clinical characteristics in patients with HCC who developed EHPMs. A retrospective analysis of 1506 Taiwanese patients found that in comparison to HCC patients without EHPMs, patients with HCC who developed EHPMs were more likely to be older, have earlier stage HCC, and exhibit better liver functional reserve[3]. They also found that patients with HCC and EHPMs were less likely to be chronically infected with Hepatitis B virus (HBV) or Hepatitis C virus (HCV)[3]. Retrospective studies of American, Japanese, and South Korean cohorts found similar correlations[4,9,10].

In conclusion, improvements in surveillence, diagnosis, and treatment of HCC has led to an increased occurrence in the diagnosis of second primary malignancies. The case discussed here presents a rare presentation of HCC with two additional EHPMs, especially given the patient’s infection with chronic HBV. Notably, these three malignancies occurred over a period of nearly two decades. This highlights the importance of continued regular cancer screening in patients with HCC, particularly those with early stage HCC with favorable prognoses. It is therefore important for physicians to be aware of EHPMs and to provide appropriate cancer screening for early detection and treatment. With this increased awareness, we hope to see an increase in overall survival in the patients with HCC and EHPMs in the future.

Provided care for the patient with HBV and HCC, the conception and the design of the manuscript: Hann HW 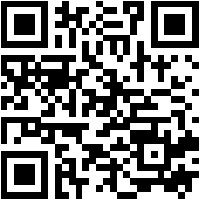