Aim: According to the current guidelines, transarterial chemoembolization (TACE) remains the first-line therapies for hepatocellular carcinoma (HCC) patients at Barcelona Clinic Liver Cancer (BCLC) B-stage and sorafenib is a small molecule target drug for BCLC C-stage. In clinical practice, clinicians have attempted to use stereotactic body radiation therapy (SBRT) plus TACE for treating intermediate- to advanced-stage HCC. However, the therapeutic effects are still inconsistent. This meta-analysis was conducted to elucidate the validity and safety of the combination therapy of SBRT plus TACE in the patients with intermediate-to advanced-stage HCC.

Methods: PubMed, MEDLINE, Web of Science, China Biology Medicine, Chinese Knowledge resources integrated and Chinese Scientific Journal Full-Text Database was searched from their inception date to November 2018. The survival rates (half-year, one-year and two-year) were analyzed and compared between the observation groups and the control groups. The negative conversion rate of AFP and the total effective rate were also assessed. Risk ratios (RR) and 95%CI were calculated to express therapeutic effects.

Hepatocellular carcinoma (HCC) is the third leading cause of cancer-related death and the fifth most common malignancy worldwide[1,2]. The incidence and mortality rates of HCC shows an increasing trend year by year[3]. Although the application of new HCC biomarkers and advanced imaging methods may improve the sensitivity and specificity of HCC in an early stage, a large proportion of HCC patients have been already at the intermediate-to advanced-stage at the time of diagnosis.

TACE, radiofrequency ablation, microwave ablation are widely used in clinically, and each of them has been proved to produce a great healing effect on patients in clinical practice[4-6]. However, the limited indications and contraindications restrict the clinical use of the monotherapy which may lead to a high recurrence rate. In recent years, researchers have tried relevant clinical trials to seek the treatment effect of combined treatment on patients with intermediate-and advanced-stage HCC[7-10].

With the development of liver radiobiology and the significant progress of radiotherapy technology, SBRT has been gradually applied to HCC in the intermediate and advanced stage[11]. However, due to the relatively small sample size of related clinical trials and the lack of multi-center and large-sample randomized controlled studies, the efficacy of SBRT combined with TACE in the treatment of intermediate-and advanced- stage HCC is difficult to draw definite conclusions. Therefore, the current meta-analysis was carried out to evaluate the efficacy and safety of combination therapy and provide evidence for clinical decision making.

Studies were acquired via searching English databases, covering PubMed, MEDLINE, and the web of science (SCI). Chinese databases were also examined, including Chinese Knowledge resources integrated, Chinese Scientific Journal Full-Text Database and China Biology Medicine. The closing date for documents search was November, 2018,“transcatheter arterial chemoembolization” or TACE) or “transarterial chemoembolization” and “hepatocellular carcinoma” or “liver carcinoma” or “liver cancer” or “HCC” and (“stereotactic body radiation therapy” or “Gamma Knife”) were used as search terms. Additionally, the references of relevant articles were also retrieved until no new potential material could be found.

After searching the literature within several databases, 399 potentially relevant studies were identified initially. After the examination of titles and abstracts, 156 surveys were excluded and 57 articles were selected for full-text screening. Finally, 13 studies were included for this meta-analysis. The study recruitment flowchart was shown in [Figure 1]. 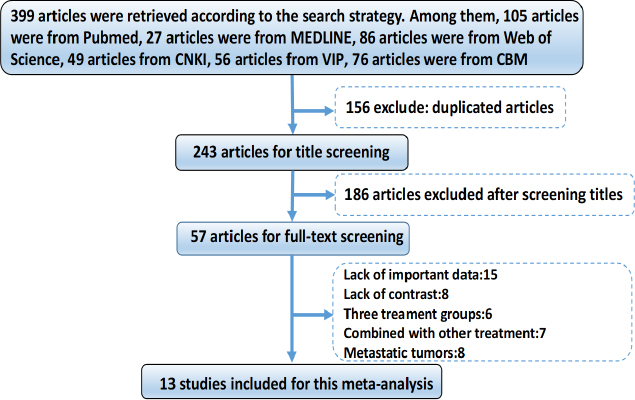 Data extraction of the studies

Baseline characteristics of studies included in the meta-analysis

Two researchers (Shoujie Zhao and Baishu Dai) independently evaluated the included studies. The authors’ name and institution were blinded to researchers. The risk of bias in RCTs was assessed according to the Cochrane Risk of Bias tool[12] which is based on the following aspects: random sequence generation, allocation concealment, blinding of participants and personnel, blinding of outcome assessment, incomplete outcome data, and selective reporting. All the disagreements were discussed with the third researchers (Yong Long) to reach consensus.

Comprehensive Meta-Analysis V2 software was used in the data analysis. Pooled risk ratios (RRs) and 95%CI were calculated to express therapeutic effects which were identified to be statistically significant if P value < 0.05. The heterogeneity was assessed usingthe I2 statistic and associated P values. Statistically, heterogeneity was deemed to haveexisted among the studies if P value < 0.1 or I2 > 50.00%. A random-effect model was used to analyze the results if the heterogeneity existed. On the contrary, the fixed-effect model was used. Publication bias was assessed by the outcomes of the Egger test and the Begg test. If the number of included studies was less than 5, publication bias was not assessed. 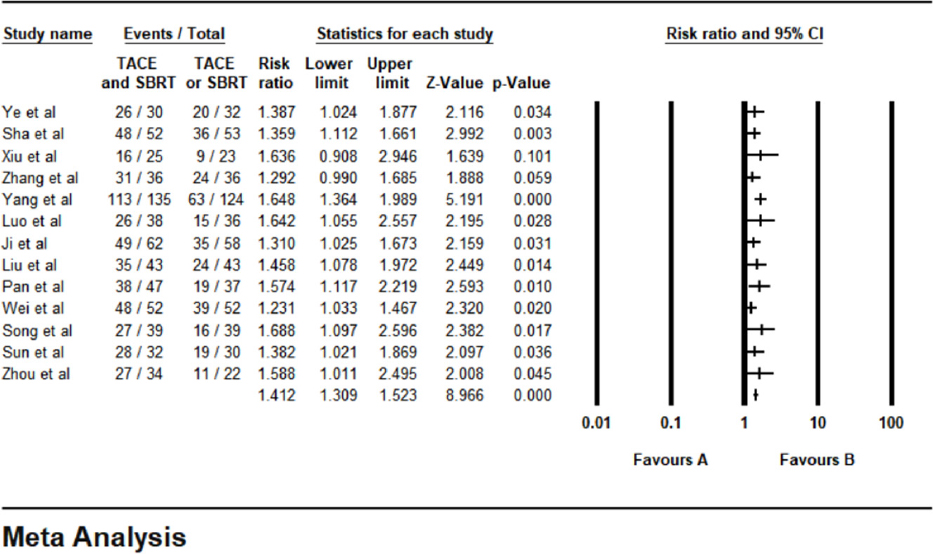 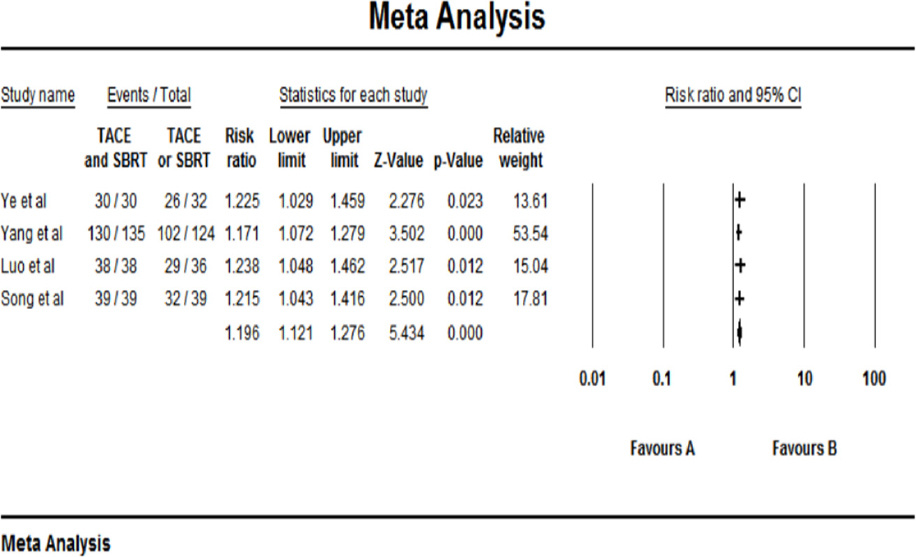 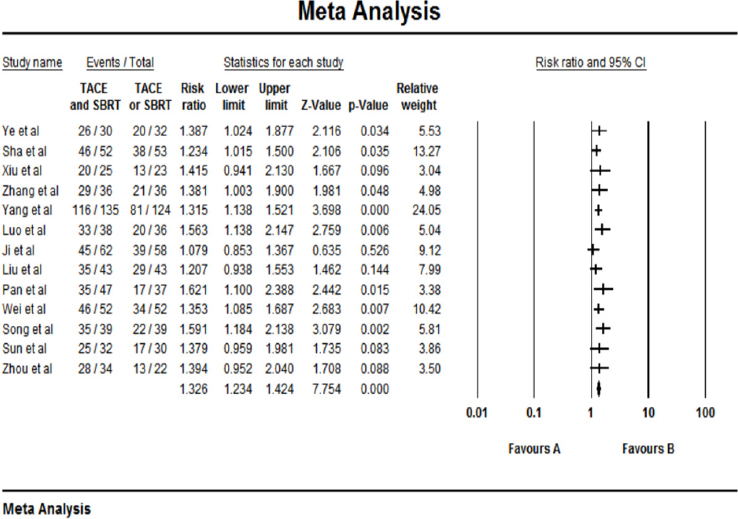 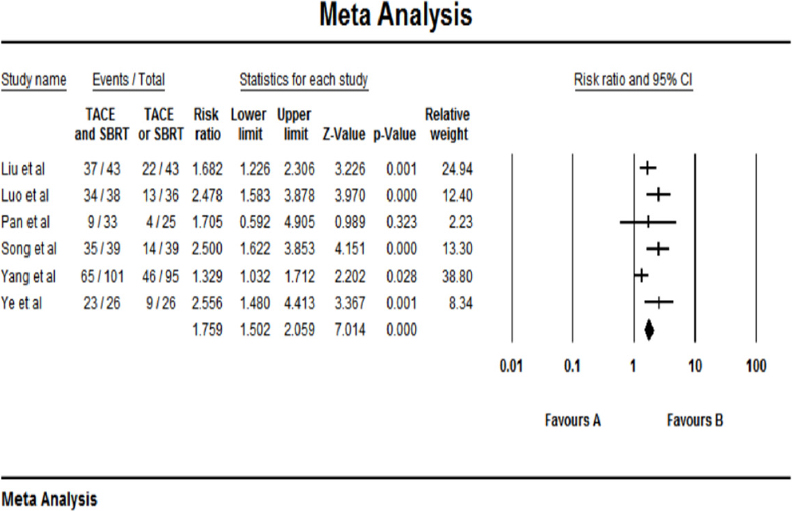 The negative conversion rate of AFP 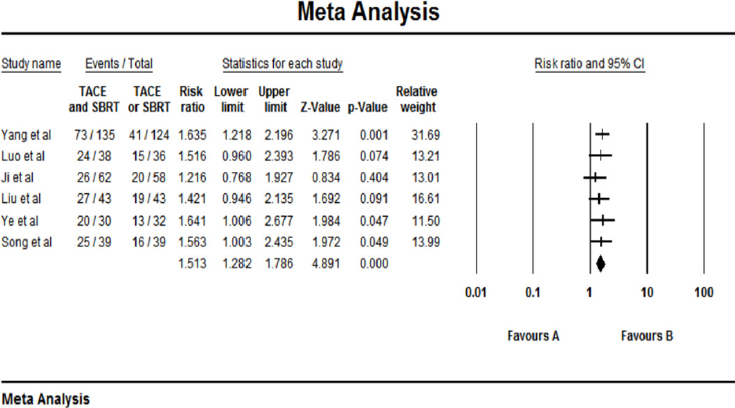 This current meta-analysis aimed to assess the validity and safety of SBRT combined with TACE for patients in intermediate-to advanced-stage HCC. The pooled results showed that TACE plus SBRT notably ameliorated the total survival rates of half-year, one-year and two-year (P < 0.05). Combination treatment of SBRT and TACE were also benefited to the negative conversion rate of AFP and the total effective rate (P < 0.05). The results revealed that SBRT combined with TACE had superior efficacy than that of SBRT or TACE alone for HCC patients in intermediate-to advanced-stage.

HCC is a malignant tumor which seriously endangers human health. Due to the difficulty in early diagnosis and its hidden character, most patients are diagnosed at the intermediate- to advanced-stage. Sorafenib or lenvatinib is currently used as a first-line standard therapeutic agent for advanced HCC according to the BCLC criteria[13,14]. Besides, apatinib may be a substitute for HCC patients with sorafenib resistance in the future, especially for those with high expression of VEGF[15]. With the rapid development of clinical medicine, the appearance of more and more treatment methods which lead to no uniform suggestion for the treatment of intermediate to advanced HCC patients.

TACE is recognized as an alternative treatment option for intermediate-to advanced- HCC patients[16]. It is to inject chemotherapy drugs directly into tumor blood supply artery through a catheter which can improve local drug concentration of tumor to increase the ability to kill cancer cells, achieve embolization of tumor blood vessels and block the blood supply of a tumor, tumor tissue necrosis, shrinkage, and disappearance. However, tumor tissues could not be eliminated through TACE[17]. There are mainly three reasons. Firstly, after TACE, some infiltrating cells and metastatic liver cells are still alive, and repeated treatment by TACE may produce a specific resistance to chemotherapy drugs. Secondly, the liver tissue is damaged due to hypoxia and ischemia, embolization agents and chemotherapy drugs, which influences the clinical efficacy of transcatheter arterial chemoembolization. Thirdly, after TACE, part of the tumor tissue will recover blood supply. Therefore, although the short-term effectiveness of TACE is justifiable, it still has limitations, and the long-term effectivness remains unsatisfactory.

The liver is a radiosensitive organ which ranks only behind bone marrow, lymphoid tissue, and kidney[18]. As a result, in spite of the rapid development of radiotherapy for HCC, the efficacy was not significantly improved. In recent years, with the growth of stereotactic radiotherapy, SBRT is gradually appropriate for intermediate-to advanced-HCC[19-22]. SBRT delivers a high dose of radiation to HCC within a short period time and is effective and less invasive for the delivery of high radiation doses to the tumor with hypofractionation. Employing the high-dose irradiation to the tumor area which can reduce irradiation dose of the healthy liver tissue at the same time, SBRT can make the tumor vascular degrade and mortify, lower the blood supply of the cancer to achieve the goal of killing tumor cells. Besides, it is efficient that multiple lesions can be operated at the same time by the use of SBRT. The features of SBRT above, to a large extent, make up the defect of TACE.

The application of SBRT combined with TACE in the treatment of intermediate-to advanced-HCC patients produced a synergistic therapeutic effect which may be related to the following factors: (1) TACE can shrink tumor volume and reduce normal liver tissue damage; (2) Chemotherapeutics have the effect of enhanced sensitivity for radiotherapy; (3) SBRT can denature vascular endothelial cells and block blood capillaries, prolong the storage time of iodide oil and drugs in the body, and avoid repeated TACE treatment; (4) TACE and SBRT have different therapeutic effects on cancer cells at various growth stages; (5) TACE can promote the transformation of the remaining cells from non-proliferative stage cells to the proliferative phase which can improve the sensitivity and the therapeutic effect of SBRT.

Six studies revealed that the side effects in the combined therapy group were slightly more substantial than those in the monotherapy group, such as decrease of hemoglobin, leukocyte, thrombocytopenia, gastrointestinal reactions, and liver function damage, but there was no significant difference between the experimental group and control group (P > 0.05). The prognosis of the patients generally did not be affected through the active symptomatic treatment[29,30,32,33,36,39].

The results of our meta-analysis are subject to several limitations. Firstly, although a total of 13 studies including 1210 patients were enrolled and the whole studies selected were high-quality RCTs, the sample sizes of most studies were relatively small[29-41]. As a result, the studies selected maybe not capable of finding out the details of all aspects and performing more subgroup analyses to evaluate the effect of the patients treated by SBRT plus TACE compared with SBRT or TACE monotherapy. To verify and extend the observations, a more randomized controlled, multi-center, large sample of trials are necessary. Secondly, for the sake of clinical practice guidelines and ethical issues, there might be produced potential selection bias which may derive from the characteristics of the patients such as the age, the liver function, tumor size. The above limitations may influence the final results. Thirdly, due to lack of sufficient data, the sequence of the two therapies and the interval of them, the frequency of TACE and the dose of radiotherapy were not performed in this meta-analysis which was expected to be answered by further clinical studies. Fourthly, the included studies were all conducted in China, which may bring the regional bias.

In conclusion, compared to the treatment of TACE or SBRT alone, SBRT combined with TACE is a mild, safe and effective treatment which can extend the survival time and be beneficial to the prognosis of intermediate-to advanced-stage HCC patients without any significant increase in severe untoward effects. Further studies should be performed to confirm the impact of the combined therapy.

Discussed, agreed upon the content, contributed to the development and revision of the draft manuscripts, read and approved the final manuscript: all authors 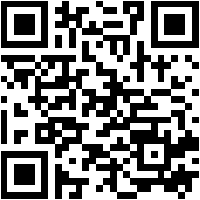