This is an open access article licensed under the terms of Creative Commons Attribution 4.0 International License (https://creativecommons.org/licenses/by/4.0/), which permits unrestricted use, distribution, and reproduction in any medium, as long as the original author is credited and the new creations are licensed under the identical terms.

Aim: Transforming growth factor (TGF) is overexpressed by tumor cells like other proteins and growth factors. TGF-β1 is then activated in the extracellular compartment but is unable to control cell proliferation because of the absence or low level of TGF-β1 receptors on the plasma membrane of malignant hepatocytes. This potential mechanism might interrupt the autocrine regulation loop of TGF-β1 and its blocking effect on cell proliferation. TGF-β1 is a multifunctional cytokine involved in the regulation of growth and differentiation of both normal and transformed cells. This study aimed to evaluate the association of serum levels of TGF-β1 with disease severity.

Methods: A total of 180 subjects were classified into 6 groups according to Barcelona clinic liver cancer (BCLC) classification, 30 patients each: early (BCLC 0 and A), intermediate (BCLC B), advanced stage (BCLC C), and terminal stage (BCLC D) of hepatocellular carcinoma as well as 1 group of patients with cirrhosis only and 1 control group. Serum levels of TGF-β1 were measured.

Conclusion: TGF-β1 may have a role in tumor growth and progression.

Liver cancer is the sixth most common cancer, the third cause of cancer related deaths, and accounts for 7% of all cancers[1]. The main risk factors for hepatocellular carcinoma (HCC) are chronic infections with either hepatitis B virus (HBV) or hepatitis C virus (HCV), making up approximately 75%-85% of all cases, as well as excessive alcohol consumption, which is responsible for about 40% of HCC development in Western countries[2]. Chronic inflammation and tissue damage by these agents leads to cirrhosis which is the underlying condition for the majority of HCC cases[3]. Early detection and appropriate treatment remain the best strategy for reducing mortality.

Transforming growth factor β (TGF-β) superfamily is known to be involved in embryonic development, adult tissue homeostasis, and disease pathogenesis. Specifically, it has been shown to control proliferation, differentiation, apoptosis, migration, extracellular matrix remodeling, immune functions, and tumor invasion/metastasis[4]. TGF-β enhances hepatic stellate cell activation, stimulates collagen gene transcription and suppresses matrix metalloproteinases expression. Thus, TGF-β, as well as its intracellular mediators; Smad proteins, can be potential therapeutic targets for liver fibrosis. TGF-β inhibits hepatocyte proliferation, but it also promotes HCC. TGF-β has been shown to play both tumor-suppressive at early stage and tumor-promoting roles at later stage[5]. At the early stage of tumorogenesis, TGF-β1 inhibited normal cell growth and tumorogenesis by suppressing G1/S phase transition[6], in later stages; malignant cells become resistant to suppressive effects of TGF-β either through mutation and/or functional inactivation of TGF-β receptors or by downstream alterations in the SMAD-signaling pathway[7]. Mutations in downstream TGF-β signaling components cause variable attenuations or complete loss of expression; these mutations, which have been detected in many common tumors, affect TGF-β signal transmission that potentially results in human cancer development and progression[8]. TGF-β1 expression was related to tumor grade and pathological stage. Furthermore, overexpression of plasma TGF-β1 was associated with invasiveness of HCC and worse prognosis[9].

The aim of this study was to evaluate the association between serum level of TGF-β1 and disease severity in Egyptian patients with HCC.

This cross sectional study was conducted at National Liver Institute, Menoufia University. The study protocol was approved by institute Ethics Committee. A written informed consent was obtained from all participants in the study. 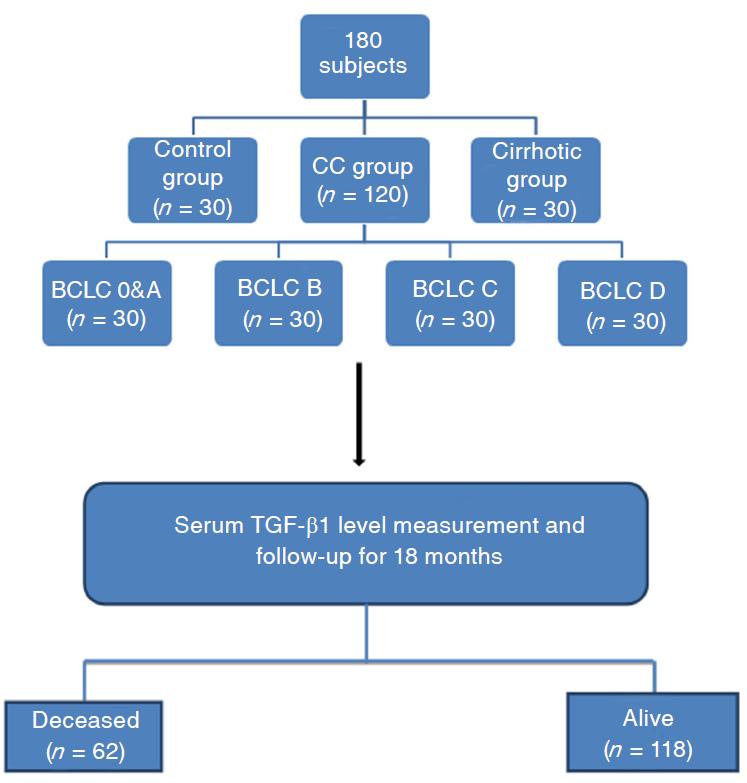 The diagnosis of HCC was based on non-invasive criteria using multi-slice triphasic spiral computed tomography or contrast enhanced dynamic magnetic resonance imaging. The presence of typical features of arterial enhancement and rapid portal or delayed washout on one imaging technique was diagnostic of HCC for nodules > 2 cm in diameter in cirrhotic patients. In cases of uncertainty or atypical radiological findings, diagnosis was confirmed by biopsy[10]. Liver cirrhosis was diagnosed by ultrasonographical findings (shrunken liver, coarse echo pattern, attenuated hepatic veins and nodular surface) and biochemical indication of parenchymal harm.

Data was statistically analyzed using SPSS (Statistical Package for Social Science) Program version 13 for Windows and for all the analysis a P value < 0.05 was considered statistically significant.

The demographic criteria of all subjects included in the study are shown in Table 1.

Demographic criteria in all subjects

Table 2 shows the tumor characteristics in 120 patients with HCC included in the study.

Serum levels of TGF-β1 was significantly higher in HCC groups compared to cirrhotic and control groups (P = 0.000) as shown in Table 3 and Figure 2.

Serum levels of TGF-β1 in all subjects 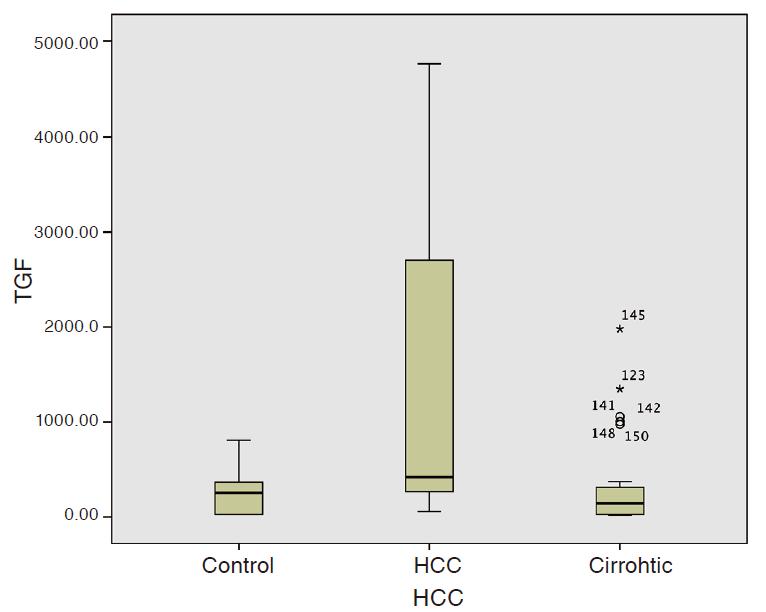 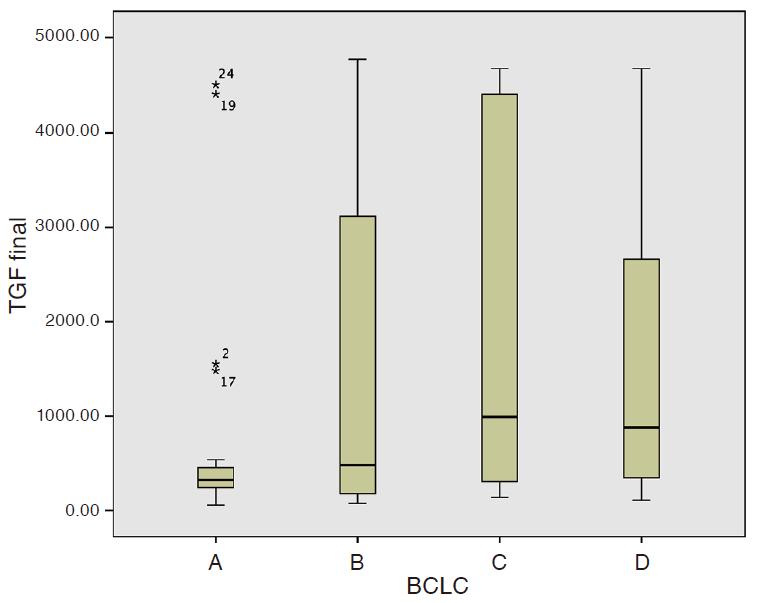 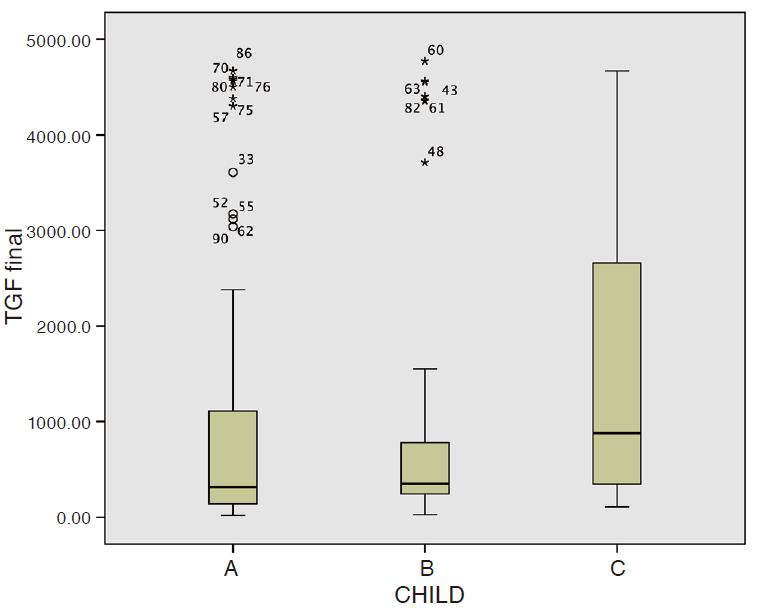 Table 5 shows that higher serum levels of TGF-β1 were significantly associated with vascular and invasion and tumor size (P = 0.001 and 0.02 respectively) rather than number of nodules (P = 0.964).

Lower serum levels of TGF-β1 was associated with a higher probability of survival, using a cut-off value of 301.9 pg/mL, the median survival of patients with levels < 301.9 pg/mL was not reached with a probability of survival of 71.9%, the median survival for patients with level ≥ 301.9 pg/mL was only 13 months, the difference was statistically significant using log rank test (P = 0.04), as shown in Tables 6 and 7 and Figure 5.

Means and medians for survival time 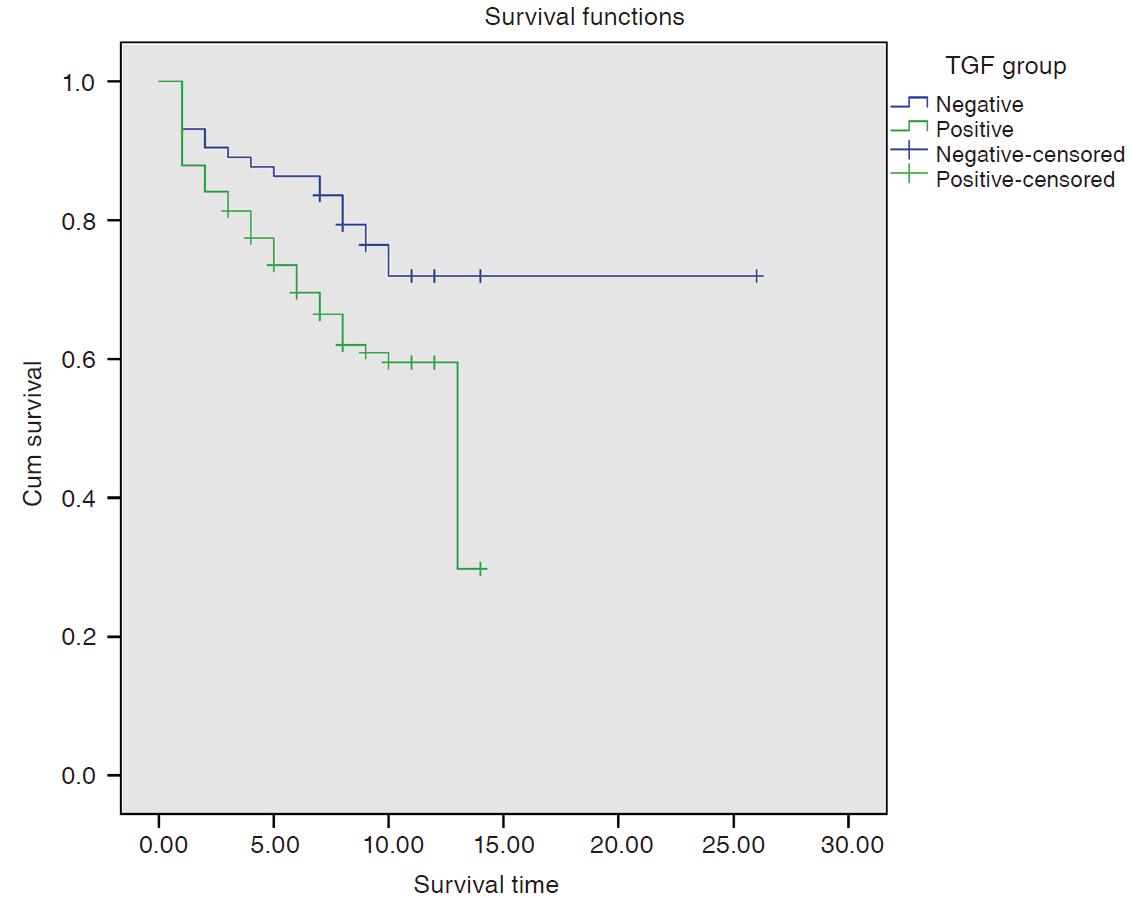 TGF-β1 acts as a growth inhibitor in normal cells, whereas in tumor cells, it loses the ability to mediate growth inhibition and instead promotes tumor progression by enhancing migration, invasion, and survival of tumor cells[11].

In liver diseases, the persistence of chronic inflammation, as observed in chronic viral hepatitis, plays a major role in determining the shift in the TGF-β1 signaling pathway from tumor suppression to increasing the risk of HCC[12].

Our study evaluated the serum levels of TGF-β1 in HCC patients, cirrhotic patient and normal subjects. Its aim was to determine the specific contribution of TGF-β1 over-expression to progression of HCC.

In our study, we demonstrated significantly higher levels of TGF-β1 in HCC patients (1,687.47 ± 1,462.81 pg/mL) compared to the other two groups (cirrhotic 487.98 ± 344.23 pg/mL and healthy control 250.16 ± 284.61 pg/mL), with no significant difference between control and cirrhotic groups. These findings signified the role of TGF-β1 in tumor growth and progression, implicating its potential use as novel marker for risk prediction of HCC development in cirrhotic patients.

These results are in agreement with Shehata et al.[13], who found that TGF-β1 levels were also significantly higher in patients with HCC group compared to chronic hepatitis C patients and control groups.

Similarly, Lee et al.[9] found that plasma TGF-β1 levels were significantly higher in patients with HCC than in cirrhotic patients and normal controls. However, serum levels of TGF-β1 in the cirrhotic patients were significantly lower than those in normal controls and explained that by decreased synthetic function in patients with advanced cirrhosis, resulting in a lower production of TGF-β1 from hepatocytes themselves.

Our study showed that serum levels of TGF-β1 in HCC patients were associated with more advanced BCLC stages. These findings signified the role of TGF-β1 in tumor growth and progression, implicating its utility as a potential novel marker for risk prediction of HCC progression.

As cancer develops, cancer cells become more resistant to the growth inhibitory properties of TGF-β1 and both the cancer cells and the stromal cells often increase the production of TGF-β1 which stimulates angiogenesis and cell motility. Also, it suppresses immune response with the extracellular matrix and increases the interaction of tumor cell leading to greater invasiveness and metastatic potential of the cancer[14] acting as a promoter of malignancy during tumor progression[15].

But these results disagreed with Mayoral et al.[18] and Lee et al.[9], who found that the TGF-β1 values decrease significantly with progression of liver dysfunction as assessed by Child-Pugh Score.

The follow-up of our HCC patients for 18 months revealed that: the overall mortality was 51.6% with a median survival of 9 months.

The association between high TGF-β1 levels and poor treatment outcomes in advanced HCC patients was anticipated because activation of the TGF-β pathway was linked to angiogenesis and the progression, invasion, and metastasis of cancer cells in late stage malignancies[19].

In this study, ROC curve analysis of TGF-β1 in HCC showed that the best cut-off value of TGF-β1 for detection of HCC patients was 301.9 pg/mL with area under the curve of 0.765 and 95%CI 0.694-0.885, the sensitivity and specificity were 72% and 65% respectively. These results were found to be slightly different from the published reports by Shehata et al.[13], who reported that with a cut off value of TGF-β1 (370 pg/mL); the sensitivity and specificity for differentiation of HCC patients were 86.7% and 100% respectively, whereas area under the curve was found to be 0.97. This difference is mostly due to differences in the study population.

Aiming to increase the sensitivity for early detection of HCC, combination of TGF-β1 and AFP will raise sensitivity to 90% but decreasing specificity to 32%. So TGF-β1 could be complementary to AFP in the diagnosis of HCC, particularly for the cases at an early stage.

This study was funded by the National Liver Institute, Menoufia University, Egypt.

A written informed consent was obtained from all participants in the study.

The study protocol was approved by institute Ethics Committee.