Comparison of p53 and prohibitin expression in the spectrum of hepatitis, cirrhosis, and hepatocellular carcinoma

Aim: To investigate the correlation of p53 and prohibitin (PHB) expression in the spectrum of hepatitis, cirrhosis, and human hepatocellular carcinoma (HCC).

Results: Expression of NFκB and RelA/p65 was detected increasingly from NL to CIR, but had a diminished labelling in the HCC cases (P < 0.05). Expression levels of TNFR1 and TRAIL followed the same pattern (P < 0.05). Apoptosis was increased in HCC, but was progressively reduced from CIR to NL (P < 0.05). p53 and PHB nuclear expressions were amplified in cases of HCC, but diminished in NL, HCV, and CIR (P < 0.05).

Conclusion: These results suggest that in addition to well-understood sequences of proinflammatory events such as TNF-induced NFκB activation and NFκB/TRAIL pathway-mediated apoptosis, development of HCC is also influenced by regulation of p53 and PHB tumour suppressor function. Additional studies are necessary to explain the contradictory mechanisms of the tumour microenvironment observed in the sequence of HCV, CIR, and HCC.

Hepatocellular carcinoma (HCC), the most frequent primary hepatic cancer, is the third highest cause of cancer-related death worldwide.[1] Accumulation of genetic and epigenetic alterations results in the development of HCC.[2] Therefore, the molecular pathways involved in hepatic cancer have been the focus of numerous studies.

Activation of the transcriptional factor nuclear factor kappa B (NFκB), an important modulator of inflammatory and cell survival responses,[3] has been associated with hepatic carcinogenesis.[4] NFκB may be activated in hepatocytes as a consequence of chronic inflammation, which occurs in viral hepatitis.[5] However, little is known about the interaction of NFκB activation and tumour microenvironment in the sequence of hepatitis C virus (HCV), cirrhosis (CIR), and HCC.

The inflammatory cytokine tumor necrosis factor-α (TNFα) participates in the control of cellular proliferation and differentiation and cell death.[6] Although TNFα was initially identified as inducing cell death in some tumours, an association between activation of the TNFα/NFκB pathway by inflammation and hepatocarcinogenesis has also been reported.[7] Binding of TNFα to TNF receptor-1 (TNFR1) results in NFκB activation and may induce hepatocyte survival and proliferation.[8] Additionally, activated NFκB can be considered as a protector of TNFα-induced apoptosis.[9]

The p53 gene is a classical tumor suppressor gene. p53 mutations occur in diverse human cancers, including HCC. p53 tumor suppressor function involves cell cycle control, transcriptional regulation, and apoptosis.[2] In spite of the p53 mutation being rare in HCC not induced by aflatoxin, the high incidence of HCV-related HCC justifies novel studies even in this context. NFκB linked to HCV non-structural 5A (NS5A) protein inhibits the p53 tumor suppressor role and leads to cell survival and hepatocarcinogenesis.[12]

Human prohibitin (PHB), a pleiotropic protein, was identified first as a potential tumour suppressor[13] and has been implicated in cellular differentiation, antiproliferation, and morphogenesis.[14] Although a liver-specific deletion of PHB has been observed in a wide spectrum of liver injury types, fibrosis, and hepatocarcinogenesis in mice,[15] PHB has also been reported to be overexpressed in cases of human HCV.[16] On the other handit has been suggested that PHB may have a pivotal role in cellular proliferation and malignant transformation.[17] Thus, the role of PHB in development of human hepatic cancer remains controversial.

Our study aimed to compare the importance of the p53 and PHB pathway through the NFκB signalling in the spectrum of HCV, CIR, and HCC, considering the potential differences in the pathogenesis of human hepatic cancer.

Primary liver carcinoma samples were obtained from the Department of Pathology at the University Hospital of the Faculty of Medicine of Ribeirão Preto, University of São Paulo, Ribeirão Preto, São Paulo, Brazil. Twenty samples of normal liver from autopsies with causes other than liver disease (NL), 30 cases of HCV, 30 cases of CIR associated with HCV and 60 cases of HCC related to HCV-CIR were selected for this study [Table 1]. Patients with evidence of any other cause of liver disease were excluded. The study was approved by the local Ethics Committee (number 1611/2011).

Non-radioactive in situ detection of NFκB in paraffin-embedded liver tissue preparations was performed using the Southwestern histochemistry method, with digoxigenin labelling and detection kits (Roche Applied Science, Indianapolis, USA). Briefly, synthetic sense DNAs (Imprint Genetics Corporation, Hialeah, USA), which contain sequences of NFκB, were used as probes. After annealing with the complementary sequence, the DNA probe was labelled with digoxigenin. The percentage of NFκB-positive cells was obtained blindly for each case, at least 10 representative high-power fields (40×) by two of the authors (LDP and LNR). For statistical purposes, the samples were scored similarly as was presented in the immunohistochemistry section.[18]

Paraffin-embedded liver tissue sections were deparaffinised and incubated with 20 µg/mL proteinase K (Promega Corporation, Madison, USA). A DeadEnd peroxidase in situ apoptosis detection kit (DeadEnd TUNEL; Promega Corporation) was used for transferase-mediated dUTP-biotin nick-end labelling (TUNEL) staining. The percentage of TUNEL-positive cells was obtained blindly, for each case at least 10 representative high-power fields (40×) by two of the authors (LDP and LNR). For statistical purposes, the samples were scored similarly as was presented in the immunohistochemistry section.[18]

The most relevant data concerning clinic and pathological variables was the occurrence of cirrhosis or viral hepatitis in almost all HCC cases, as well as absence of cirrhosis or other inflammatory conditions in the normal liver (P = 0.0001). Additionally, the level serum α-fetoprotein was > 20 μg/L in the majority of HCC cases, but ≤ 20 μg/L in the other types (P = 0.0001) [Table 1]. 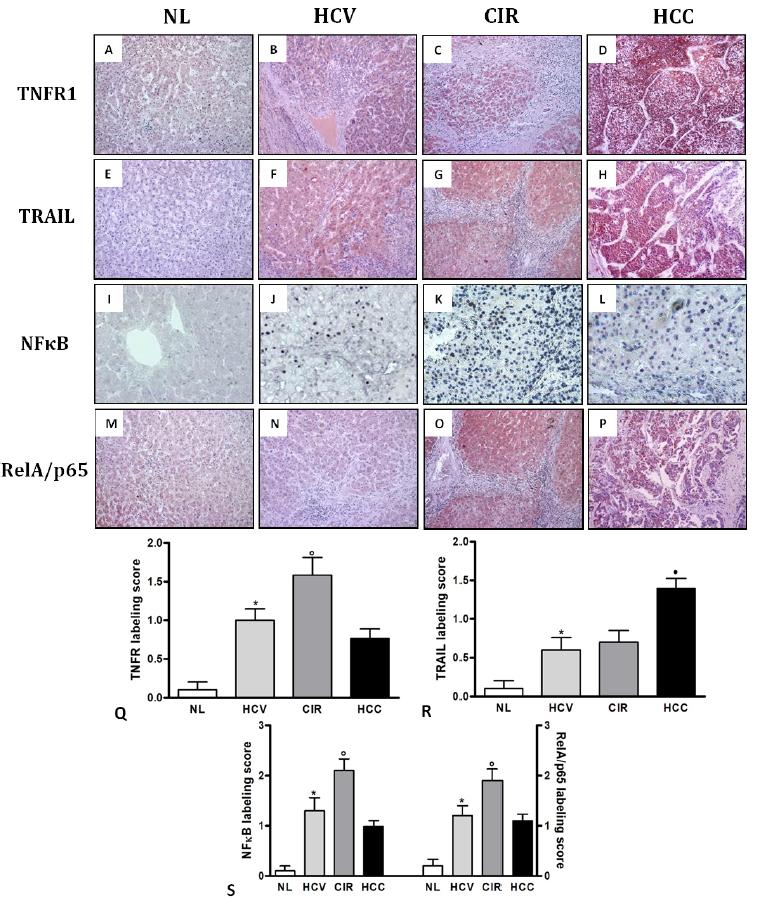 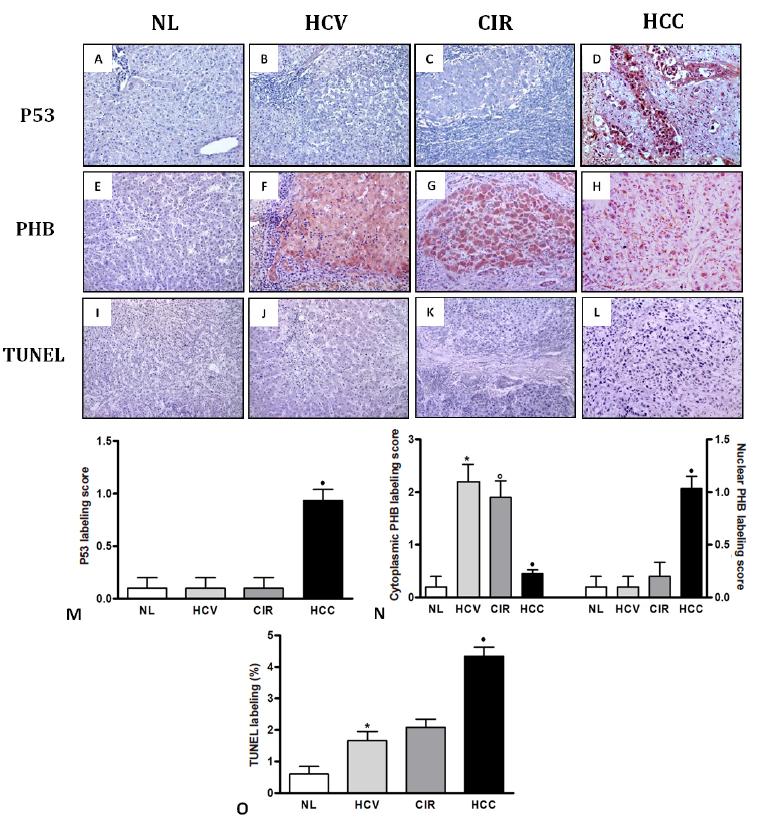 The findings of the present study reveal the importance of p53 and PHB participation in human hepatic cancer development, which is dependent on different pathogenic mechanisms of the tumour microenvironment.

TNFα cytokine is increased in patients with chronic HCV infection.[19] TNFα and TNF-receptors levels are augmented during chronic HCV infection and result in disease progression.[20] Similarly, we found a progressive increase of TNFR1 expression in cases of HCV and CIR in comparison to NL. Indeed, TNFα proinflammatory stimuli can be responsible for NFκB activation, which results in protection of hepatocytes from apoptosis.[9] Moreover, the HCV core protein potentiates NFκB activation and chronically activated NFκB leads to infected hepatocytes survival and consequent HCV infection persistence.[21]

TRAIL expression was increased and accompanied by decreased NFκB activation and frequent apoptosis in the cases of HCC when compared to HCV and CIR. In addition to inducing apoptosis in normal hepatocytes,[24] TRAIL can mediate NFκB inhibition with consequent apoptosis in transformed hepatocytes.[11] This finding may be related to the attempt of preventing tumorigenesis during chronic inflammatory disease. Moreover, increase of TRAIL expression in HCC with consequent reduction of NFκB activation and augment of hepatocytes apoptosis may occur by a p53-independent pathway.[25]

p53 has been widely considered as a tumor suppressor gene associated with induction of apoptosis in different types of neoplasms, including HCC.[26] Furthermore, p53 is usually less expressed during HCV than in HCC.[27] Accordingly, we found p53 expression almost solely in HCC, without significant changes during chronic liver inflammation. Increased p53 expression was also followed by augmentation of apoptosis in HCC. Moreover, the RelA/p65 subunit can inhibit p53 activation, as well as p53 also suppresses NFκB transcriptional effects.[28] Perhaps during HCV and CIR, the inflammatory stimulus induces an increase of TNFα with consequent NFκB activation and p53 inhibition, which leaked from hepatocytes from apoptosis. Concerning HCC, which present a less evident inflammatory process, TNFα-induced NFκB activation is discrete and, in addition to inhibition of NFκB activation by p53, augments apoptosis. Furthermore, another possible suppressor tumor gene, PHB, has been associated with an increase of p53 activity in the induction of apoptosis in cancer.[29]

The role of PHB, in particular, is not fully understood. There are controversies because both antitumorigenic and protumorigenic functions have been reported for PHB, depending on its subcellular localization.[30] In addition to regulation of various cellular functions, the mitochondrial location of PHB is mainly engaged in reducing damage caused by oxidative stress in the chronic phase of various diseases.[31] In our HCV and CIR samples, we detected a high expression of cytoplasmic PHB, likely due to chronic inflammation associated with these diseases. Moreover, in spite of PHB reducing NFκB activation mediated by TNFα, which permits occurrence of apoptosis, high levels of TNFα can also inhibit tumour suppressor PHB activity during chronic inflammation.[32] This regulatory mechanism may explain increased NFκB activation and higher hepatocytes survival in HCV and CIR in comparison with HCC, despite high cytoplasmic PHB expression in HCV and CIR. In addition, the failure of apoptosis of mutated hepatocytes may represent a primary event in the hepatocarcinogenesis associated with chronic liver disease.

Our data show that PHB expression was exclusively identified as nuclear labelling in HCC. It has been reported that nuclear PHB appears to be essential for regulation of cellular processes such as apoptosis, proliferation, and gene transcription.[30] PHB was also detected in the nucleus associated with retinoblastoma and p53, inducing changes in transcription factors, resulting in cell cycle inhibition and induction of apoptosis.[33] The tumour suppressor action of PHB was associated with nuclear expression in cells of several neoplasms.[29,34] In agreement, the HCC group presented exclusively a PHB nuclear expression in contrast to CIR and HCV. Because NFκB may be acting as an antiapoptotic mediator, and once inhibited by the action of PHB in HCC, it may increase the rate of apoptosis in these cases.

In conclusion, our results suggest that, in addition to well-understood sequences of proinflammatory events such as TNF-induced NFκB activation and NFκB/TRAIL pathway-mediated apoptosis, development of human hepatic cancer may be influenced by regulation of p53 and PHB tumour suppressor function. Another possibility would be that expression of p53 and PHB may have been altered as a consequence of an already-established hepatocellular carcinoma. Additional studies are necessary to explain the contradictory mechanisms of the tumour microenvironment observed in the sequence of HCV, CIR, and HCC.

There are no conflicts of interests.

Each patient was informed of the study and gave their consent.