Aim: The aim was to analyze the feasibility of salvage liver transplant after liver resection in hepatocellular carcinoma (HCC) with hepatitis C virus (HCV) etiology.

Methods: All the patients diagnosed with HCC with HCV etiology who underwent living donor liver transplant from July 2002 to November 2012 were studied. Their recurrence rate, mortality, and prognostic factors were analyzed and compared between primary transplant and salvage transplant for up to 5 years post-transplant.

Results: One hundred and nine patients underwent a liver transplant for HCC associated with HCV etiology within the University of California, San Francisco criteria. Eighteen were post-hepatectomy salvage transplants and 91 were primary transplants. Median follow-up time was 31 months. One, 3 and 5 years overall survival rates were 76%, 76% and 65% in the salvage group, and 92%, 85% and 85% in primary transplant group respectively. The difference in overall survival rates was statistically significant (P = 0.031). However, recurrence-free survivals for 1, 3 and 5 years were 72%, 72% and 46% for salvage group, and 91%, 73% and 46% for primary transplant group; which were not statistically significant (P = 0.328).

All the patients transplanted for hepatitis C related liver disease with HCC were analyzed retrospectively. All the data collected was at the time of liver transplant. Barcelona clinic liver cancer staging criteria were followed to decide treatment options. University of California, San Fransisco (UCSF) criteria were used as transplantation indication.[7] If the tumor was outside UCSF criteria, loco-regional therapies such as transarterial chemoembolization, radiofrequency ablation were used. These patients were scheduled for transplantation when they fulfilled UCSF criteria. Results with down staging are published before.[8] Patients who underwent liver resections before and subsequently transplanted for intrahepatic recurrence were included in salvage transplant group, and other patients who were transplanted without prior resection were included in the primary transplant group. The review board of Chang Gung Memorial Hospital approved this study.

Patients were followed-up every 3 months for the first year, then every 6 months and yearly after that. Follow-up included liver function tests, alpha-fetoprotein (AFP) and triple-phase computed tomography scan, or magnetic resonance imaging.

As described in Table 1, age of patients in both groups, mean tumor numbers and size were comparable in both the groups. The primary transplant group had statistically significant higher mean model for end-stage liver disease (MELD) score and mean Child-Turcotte-Pugh (CTP) score.

Survival and recurrence rates comparisons in both the groups 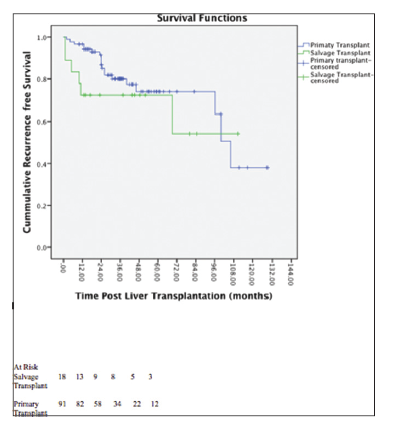 The aim of our study was to analyze feasibility of salvage transplantation for HCC associated with HCV etiology. In this study both the salvage transplant and the primary transplant groups were comparable however the primary transplant group had significantly higher pre-operative MELD scores as well as CTP scores. MELD scores and CTP scores were not significantly associated with survival or recurrence at any step of the analysis. There were no differences with regard to pre-operative viral load and pre-operative treatment taken between two groups.

In the era of new and more efficacious anti-HCV drugs, this survival difference will be probably overcome. Thus, patients with HCC and HCV can receive salvage LT but probably they should receive pre-emptive antiviral therapy.

There are certain limitations of this study as this is a retrospective analysis. We also recognize that the numbers of patients in the salvage transplantation group were relatively low and with just two recurrences in salvage transplant group, statistical significance of the recurrence rate is weak. Another limitation is that we did not have complete pathological details of prior liver resection specimens in salvage transplant group as some of them were referred to us after resection; in addition, some patients underwent resection before 2002, and complete pathological analysis was not available.

In conclusion, transplantation for post-hepatectomy recurrence for patients with HCC associated with HCV-related chronic liver disease seems to offer inferior overall survival rates than primary transplantation. However, results in the era of new anti-HCV drugs need to be evaluated further.