Methods: The authors retrospectively analyzed 100 patients with genotype 1 CHC (55 men, 45 women), who performed standard antiviral therapy (interferon and ribavirin for 12 months) in the period 2002-2012, evaluated with blood tests and abdominal ultrasound to compare different virological and biochemical response in both gender.

The liver is a sexually dimorphic organ with gender differences in gene expression, mitochondrial function, microsomal enzyme activity, membrane lipid composition, immunological response. Many studies found gender differences in hepatic response to different stressors, postulating as pattern of secretion and expression of receptors of growth hormones and sex hormone levels may underlie sexual dimorphism. The hepatic circulation depends by a balance between vasoconstrictor and vasodilator substances; in stress conditions, the liver produces prevalent vasodilating substances in females than in males, probably due to estrogens, contributing to protect microcirculation.[1]

Clinical studies also showed how females are more susceptible to the alcohol detrimental effects, as they develop liver disease following alcohol exposure, although reduced in quantity and time. Thus chronic alcohol assumption may modify the hormonal balance in both sexes, suggesting a role for sex hormones in the pathogenesis of alcohol-induced liver disease. Furthermore, compared to men, women have a lower volume of distribution and gastric alcohol dehydrogenase activity, so being more prone to liver injury.[2] Furthermore, gender differences have been reported in both incidence and progression of specific liver diseases, such as autoimmune hepatitis, genetic hemochromatosis, non-alcoholic hepatic steatosis and chronic hepatitis C (CHC).

In this study, we aimed to assess whether gender may predict virological response to standard antiviral therapy in subjects with CHC. The identification of predictive factors for response to treatment may allow personalize therapy and improve the cost-effectiveness profile.

Subjects were followed monthly, until the end of therapy. Thereafter, subjects showing ETVR were observed during the following 24 weeks, in order to verify either the persistence SVR or the loss of response.

Data were expressed as means ± SD (continuous variables) or proportions (categorical values). T-test and Chi-square test were used to evaluate group differences in means and proportions, respectively. Univariate analysis was performed on baseline parameters to identify factors potentially related to SVR. All P values were two sided, considering statistically significant a P value < 0.05. All analyses were performed with Statistical Package for the Social Science version 20.0.

Baseline characteristics, laboratory data and the degree of steatosis and fibrosis are summarized in Tables 1-6. Baseline characteristics, laboratory data and the degree of both steatosis and fibrosis were comparable in men and women, excepted for haemoglobin, GGT and uric acid values, resulted significantly higher in men. Similar results were obtained after stratification of participants by gender and age < or > 50 years; haemoglobin and GGT values were significantly higher in men compared to women both aged less and more than 50 years. Cryoglobulins positivity occurred more frequently in women aged more than 50 years (P = 0.05).

Degree of fibrosis and steatosis in the whole sample considering males and females, value of the Chi-square test and the related P value

*Steatosis degree has been assessed only in 95 subjects (53 males and 42 females), resulting 5 ultrasonographic investigations poorly reliable

Degree of fibrosis and steatosis considering males and females, value of the Chi-square test and the related P value respectively in the < 50 and > 50 year-aged patient samples

In the whole sample < 50 years patients showed a significant rate of SVR (P = 0.040) [Table 6], due to < 50 years women who achieved significant higher rates of both ETVR (P = 0.001) and SVR (P = 0.01) compared to males of similar age [Table 7, Figures 1 and 2]. On the other hand, frequency of subjects not achieving RVR or EVR was significantly higher in men > 50 years than in females [Table 7]. No significant differences existed in virological responses in subjects > 50 years. 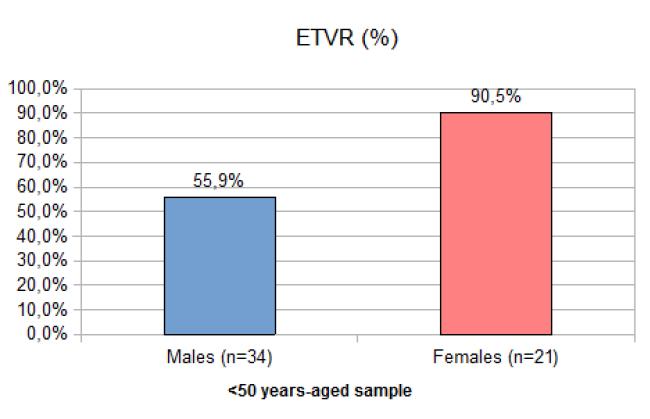 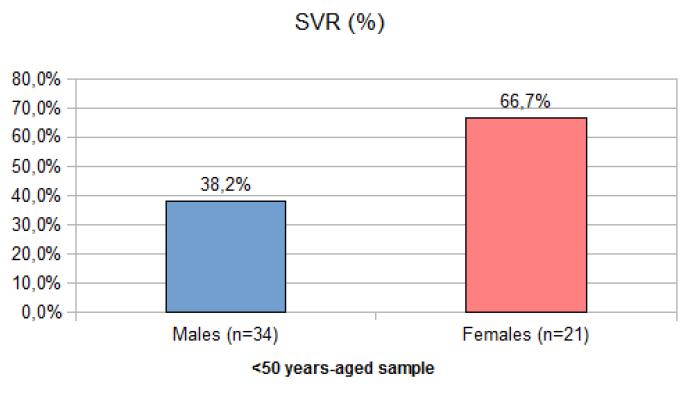 Influence of age among patients of the same gender 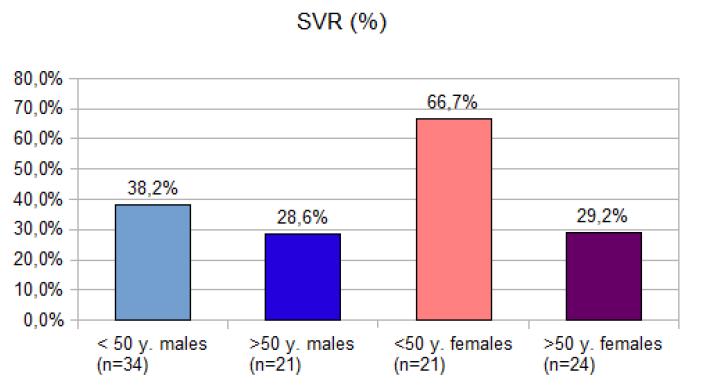 In women with menopause, hepatic steatosis was more frequent and severe than in men:[11] menopause may correlate with necro-inflammation, steatosis and metabolic alterations (high levels of cholesterol and glycemia). Steatosis showed a higher prevalence in chronic-HCV patients in post-menopause (> 55 years); moreover the pro-inflammation state related with menopause may cause a moderate to severe fibrosis progression, leading to an inefficient response to antiviral therapy.[12,13]

In our sample, the pre-treatment steatosis level did not differ meaningfully in two genders either in the whole sample or in younger and older than 50 years groups. The presence of fibrosis at baseline was not associated to gender either in the overall sample or in two examinated groups.

Studies on natural history and predictors of severity disease showed that the evolution of sickness presented a high inter-individual variability and several factors were associated to progression in fibrosis.

Rigamonti et al.[14] stressed as the gender may influence the progression of CHC only in young patients: in < 50 years women emerged lower necro-inflammation and fibrosis than in same aged men, whilst in > 50 years women and men authors did not noticed differences in the disease severity.

In literature effects of gender remain a controversial topic not only as regards the therapy outcome but also relatively to the spontaneous clearance of infection, to the developments of infection linked complications, to the outcomes after liver transplantation.[13,15]

Several studies demonstrate a higher clearance in women than in men; steroid hormones would play a role for the gender-specific susceptibility of infection even though any sufficiently exhaustive model has not been submitted yet.[16]

In order to identify factors able to predict SVR, our univariate analysis considered biochemical and ultrasonographical parameters, and presence of fibrosis at baseline: beyond age and gender, the factors appeared associated to SVR were RVR, GGT levels and 0-2 fibrosis. RVR was a powerful predictive factor of SVR in previous studies, showing as patients with RVR had ratio of SVR meaningfully higher than others; moreover some studies suggest RVR as the most important SVR predictor.[17-20]

In conclusion several studies demonstrated that higher degrees of fibrosis have been associated with lower rates of response. To evaluate the effectiveness of treatment, several indicators of response were analysed, in particular SVR which represents the optimal outcome of treatment. There is no concordance of opinion concerning the gender role on the response to the treatment.

In literature there are few studies which identify alike responses in two genders after making comparisons between men and women in patients younger than 40-50 years. Two recent works do not detect a significant influence of genre even though both identified a meaningfully greater response in women younger than 40-50 years compared to the eldest ones Other studies consider the male gender as one of the strongest factors to predict SVR.[17,25] Furthermore data concerning rates of SVR in women are conflicting; studies which identified female gender as an independent factor linked to SVR or which noticed as not exist meaningful differences in genders were not stratified by age and considered not differences in female hormonal status;[20,22,23] other studies suggested a better response in women even after splitting the sample into age groups.[13,19,23,24]

Few studies lead to identify alike responses in < 40-50 year-old patients of both genders: recent works detected not a significant influence of gender even though in presence of a better response in < 40-50 year-old women compared to the elder ones; other studies considered the male gender as a strong factors to predict SVR.

Our outcomes did not identify meaningful association between virological responses and gender considering the whole sample: RVR, cEVR, ETVR and SVR frequencies were higher in woman and the relapse rate was higher in men even though no statistically significant difference resulted, so indicating as the gender influences not the therapy outcome.

Nevertheless meaningful gender differences emerged after stratification by age (< and > 50 years). We noticed < 50 years aged women had a higher frequency of response and a lower relapse rate compared to men belonging to the same age group, differences appearing statistically meaningful due to the absence of RVR, cEVR, ETVR, and SVR, suggesting as female gender would be a positive predictive factor of response to the therapy.

Otherwise, in the > 50 years aged group frequency of RVR and ETVR appeared higher in men whilst SVR was slightly higher in women: men had higher relapse ratio compared to women and so reaching less frequently SVR. The evidence of a better response to therapy in < 50 year-old females than in co-aged men and of an alike response in the > 50 years in both groups leads to formulate several hypotheses. It may be supposed only a worsening in women older than 50 years compared to those younger ones linked to an alike response among men before and after 50 years, or we may assume a deterioration with age in both genders even though it is more accentuated in women. Another theory considered the possibility of a rapprochement between sexes with age linked to a worsening in female gender and an improvement in > 50 year-old males. Finally, it could exist an improvement in men with age up to the level of women younger than 50 years without a real worsening of women older than 50 years; this condition may be true whether there is a meaningful improvement in men older than 50 years and an alike response in > 50 year-old women compared with younger and same gender patients.

Comparing the response frequencies in younger and older than 50 year-old males, we could exclude the last two hypothesis, having observed a less response in > 50 year-old patients in both genders without an improvement in these men compared to the < 50 year-old ones.

Since women responded to the treatment differently by age and they achieved the viral clearance more frequently than men, the hormonal activity and especially oestrogen levels may be associated to SVR;[11,26] many metabolic processes may be involved, related to the reduction in the oestrogen serum concentration after menopause,[27] although it has been not separately considered in our study; many data from literature suggested as the reproductive state may be an important factor in predicting the response to antiviral therapy.[26] These observations suggest as women in reproductive age with CHC should be treated even if liver disease is moderate, being this condition linked to oestrogens exposure.[28]

Results obtained from our comparison between younger and elder women and younger and elder men showed in the group of women a meaningful worsening in > 50 year-old patients compared to younger ones whilst this difference was not so significant in the group of men although there was a worse response after 50 years. This suggested the lost of the advantage in female gender after 50 years without having a worsening in both genders with age.

In summary, even if affected by limitations related to retrospective and in subgroups analysis, the outcomes we obtained reveal not meaningful differences between men and women when the whole sample is examined without stratification by age whilst an influence of gender on the response to the treatment is identified when patients were divided in two groups younger or elder than 50 years. Despite the grade of influence of gender on standard treatment is still debated, we noticed as the female gender may be considered a positive predictor of response to therapy, taking into account its strong interaction with age and inserting in a broader context made of several modifiable and non-modifiable predictive factors related to the host and virus. Considering both high efficacy and costs of new antiviral drugs therapy protocols, the evidence of a gender- and age- different response to the standard treatment may play a role in changing epidemiologic characteristics of eligible patients and asks the question if certain groups of patients should be primarily treated. 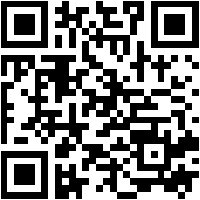