Despite doctors’ every effort to be vigilant when diagnosing, sometimes a preoperative diagnosis is disproved by postoperative pathological examination. A patient was diagnosed with hepatocellular carcinoma and received surgery as treatment. On operation, a solitary retroperitoneal mass rather than a liver lesion was seen. On histopathological examination, the retroperitoneal mass was found to be an extra-adrenal pheochromocytoma.

Despite doctors’ every effort to be vigilant when diagnosing, sometimes a preoperative diagnosis is disproved by postoperative pathological examination. Below is a case of a patient having surgery as treatment for hepatocellular carcinoma (HCC) but the patient’s disease was actually not HCC.

A 57-year-old Chinese man presented to a private surgeon for epigastric pain and significant weight loss of 20 pounds in a few weeks. He was not a heavy drinker (having a can of beer weekly) and had been generally healthy. Physical examination found nothing significant and his blood pressure was normal. Results of initial blood tests showed a normal complete blood picture and normal hepatic and renal functions. He had no chronic hepatitis B or C. His α-fetoprotein and carcinoembryonic antigen levels were within normal ranges.

Computed tomography of the abdomen showed a 5.8 cm × 4.8 cm × 7.7 cm heterogeneous arterial enhancing mass with portovenous washout occupying the whole caudate lobe of liver. It was abutting on the inferior vena cava (IVC). There was suspected tumor thrombosis invading the hepatic and infrahepatic portion of the IVC with heterogeneous enhancement [Figure 1]. The mass was splaying the main portal vein but the vein was still patent [Figure 2]. What would be the diagnosis? 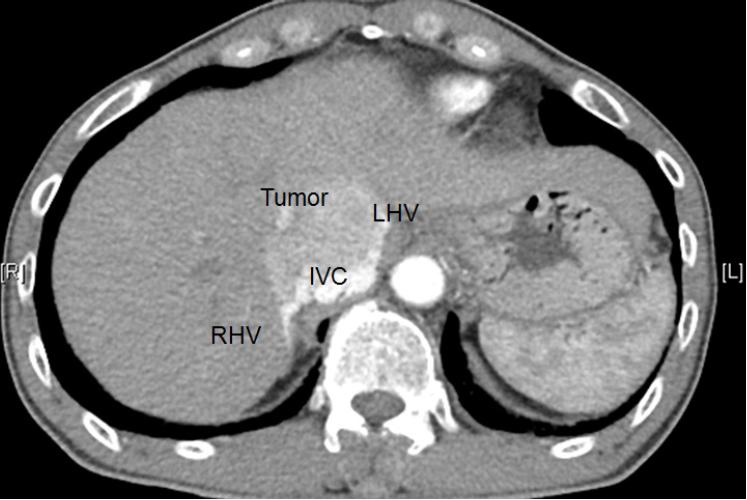 Figure 1. Arterial enhancing mass at the central part of the liver abuts on the inferior vena cava (IVC) and splays the right hepatic vein (RHV) and left hepatic vein (LHV), with suspected invasion of the IVC. The middle hepatic vein is not visible 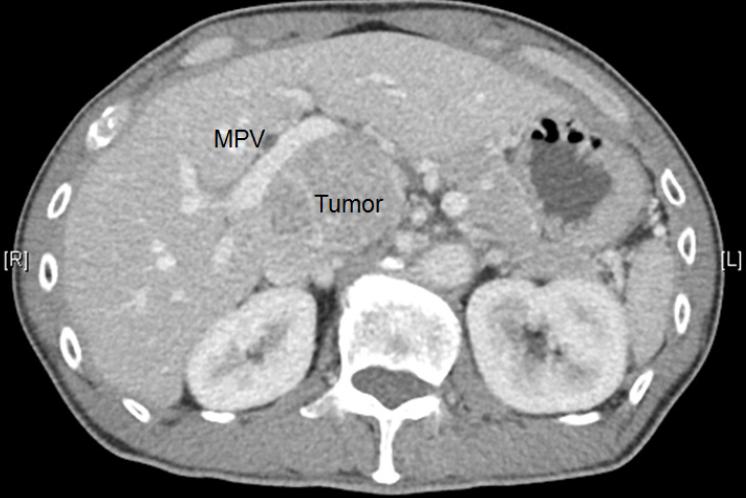 Figure 2. The mass, showing portovenous washout, extends to the head of pancreas. The main portal vein (MPV) is splayed

The patient was referred to our center for treatment. Curative resection was decided. The planned operation was right hepatectomy + caudate lobectomy + IVC resection with immediate reconstruction. Preoperative biopsy was considered but not performed because the tumor was highly vascular and access would be difficult. The patient’s indocyanine green retention rate was 8.6% at 15 min.

Surgery was performed on 26 January 2015. In the operation, a solitary 8-cm retroperitoneal mass with very vascular blood supply from surrounding structures and the aorta was found. Complete resection was done. The intraoperative blood loss was 400 mL and the operation time was 3 h and 43 min.

On histopathological examination, the retroperitoneal mass was in fact an extra-adrenal pheochromocytoma [Figure 3], not HCC. The patient had a smooth recovery and was discharged on postoperative day 6. 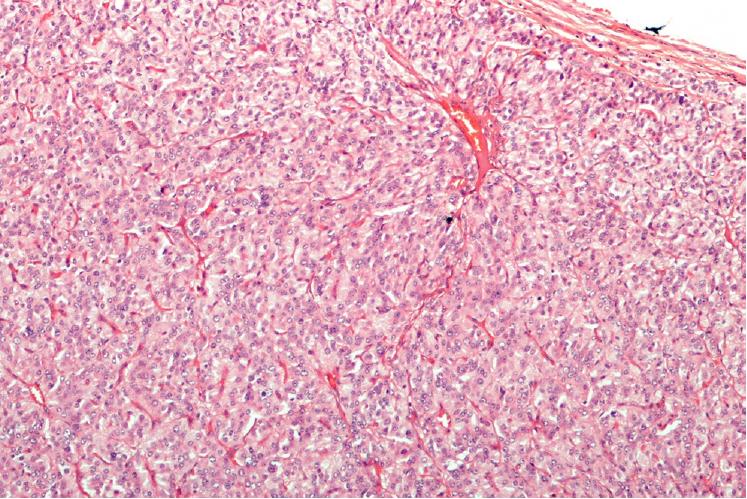 HCC is the third leading cause of cancer-related deaths in Hong Kong;[1] early referral to expert center is definitely beneficial. At our center, we treat HCC with surgery whenever possible since it is the only chance of cure. In the city, 8% of the population have chronic hepatitis B and hepatitis-B-related HCC is common. However, the patient in the present case did not have any chronic hepatitis. His α-fetoprotein level was normal too. The diagnosis of HCC was made based on radiological findings and on the consideration that HCC is prevalent in the population and not all HCC patients have hepatitis. In fact, 5% of the HCC patients at our center have no chronic hepatitis.

This patient might be regarded as inoperable elsewhere. But our center, with vast experience in liver resection and transplantation, has the expertise as major vascular resection with immediate reconstruction is a routine here. Therefore surgery was decided. Dynamic imaging was not performed for him since he would be offered surgery anyway. At our center, diagnostic dynamic imaging is performed for patients with cirrhosis or regressed cirrhosis,[2] or patients without fully developed cirrhosis but with chronic hepatitis.

To our surprise, no liver lesion was found. Instead, there was a solitary 8-cm retroperitoneal mass with very vascular blood supply. Complete resection was done. Further hormonal and genetic workup confirmed that the mass was a rare occurrence of extra-adrenal pheochromocytoma rather than a multiple endocrine neoplasia type 2.

In the literature, there are a few reports of extra-adrenal pheochromocytoma.[3-5] It is rare and therefore easily overlooked, and it could easily be misdiagnosed as primary liver cancer. The lesson to learn from the present case is that extra-adrenal pheochromocytoma, a potentially life-threatening disease, should be included on the list of candidate conditions for differential diagnosis.

Consent form was obtained from the patient.

According to regulation of Queen Mary Hospital, no approval is needed for this kind of studies as long as patients’ identity is not disclosed.