© The Author(s) 2022. Open Access This article is licensed under a Creative Commons Attribution 4.0 International License (https://creativecommons.org/licenses/by/4.0/), which permits unrestricted use, sharing, adaptation, distribution and reproduction in any medium or format, for any purpose, even commercially, as long as you give appropriate credit to the original author(s) and the source, provide a link to the Creative Commons license, and indicate if changes were made.

Anatomical resection (AR) has been reported to achieve better long-term outcomes than non-anatomical resection for the treatment of hepatocellular carcinoma (HCC). The surgical feasibility and oncological significance of laparoscopic AR (LAR), especially “subsegment resection”, “cone unit resection”, and repeat LAR for HCC, remain unproven. We present a 67-year-old patient with alcoholic liver cirrhosis and HCC who underwent full LAR three times, focusing on the technical aspects of the Glissonean approach. Repeating LAR for recurrent HCC could be a safe and feasible procedure. However, HCC recurred in the neighboring segment twice, even though pathological vascular invasion and marginal remnants were not confirmed. We should investigate the oncological significance and advancements in subsegmentectomy and cone unit resection, in the future. We report the case of a patient with HCC who received full LAR three times, focusing on the technical aspects of the Glissonean approach. We all discuss the limitations of AR for HCC.

A 67-year-old man with alcoholic liver cirrhosis and no hepatitis B or C virus infection was referred to our hospital. Abdominal computed tomography (CT) showed a 3 cm liver mass in Segments 3 and 4a with the typical features of HCC with early arterial enhancement and portal vein washout, which was classified as LR-5 of the Liver Imaging Reporting and Data System (LI-RADS). Preoperative evaluation of the liver function revealed Child-Pugh class A and the 15 min retention rate of Indocyanine green (ICG15) was 11%. The serum levels of tumor markers for alpha-fetoprotein (AFP) and protein induced by vitamin K absence or antagonist-II (PIVKAII) were 67.7 ng/mL and 74 mAU/mL, respectively. Preoperative surgical simulation using three-dimensional (3D) CT rendered on a specific workstation (ZIOSTATION 2, Ziosoft Inc., Tokyo, Japan) suggested the feasibility of limited anatomical subsegmentectomy instead of left hepatectomy (resection volume was 115 mL, which was 9.7% of the total liver volume) on Makuuchi’s criteria.

The Glissonean approach from the liver hilum was applied to selectively isolate and finally close these pedicles for the segment or subsegment involved by the tumor. ICG dye fluorescence (0.5 mg/body) was used to obtain demarcation lines both superficially and in the deep parenchyma, achieving a true anatomical resection.

We performed pure LAR of Segments 3 and 4a. The operative time was 264 min, the estimated blood loss was 5 mL, and there was no need for blood transfusion. The patient was discharged on Postoperative Day 6 without any postoperative complications. Pathological findings of the tumor proved stage II moderately differentiated HCC with negative resection margins and no vascular invasion [Figure 1]. 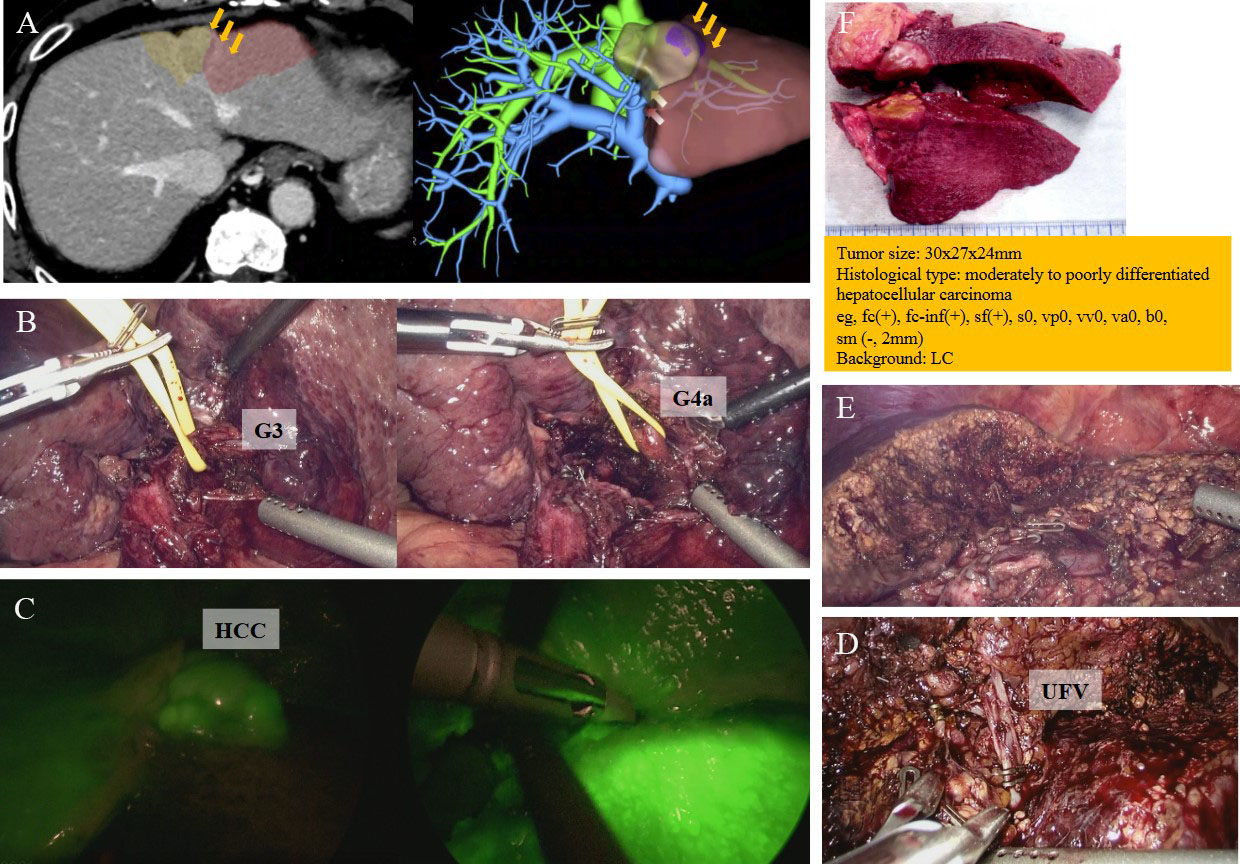 Nine months after the previous surgery, abdominal CT revealed recurrence, with two liver masses (1.5 and 1 cm), which were classified as LR-5 of LI-RADS located in Segment 4b. Liver function was Child-Pugh A and ICG15 was slightly elevated (23%). Serum levels of AFP and PIVKA-II were 67.8 ng/mL and 17 mAU/mL, respectively. We performed a second LAR of Segment 4b. The operative time was 195 min and the estimated blood loss was 28 mL. The patient was discharged on Postoperative Day 8 with no postoperative complications. Pathological findings showed stage II moderately differentiated HCC with negative resection margins and no vascular invasion [Figure 2].

Three months later, abdominal CT revealed recurrence, which was a 1.3 cm liver mass classified as LR-5 of LI-RADS located in Segment 2. ICG15 was not elevated (16%). Serum levels of AFP and PIVKA-II were 58.9 ng/mL and 20 mAU/mL, respectively. We performed a third LAR of Segment 2. The operative time and the estimated blood loss were 183 min and 60 mL, respectively. The patient discharged on Postoperative Day 7 with no postoperative complications. Pathological examination of the resection specimen proved stage II moderately differentiated HCC with negative resection margins and no vascular invasion [Figure 3]. The patient showed no recurrence during the follow-up, nine months after the third surgery. 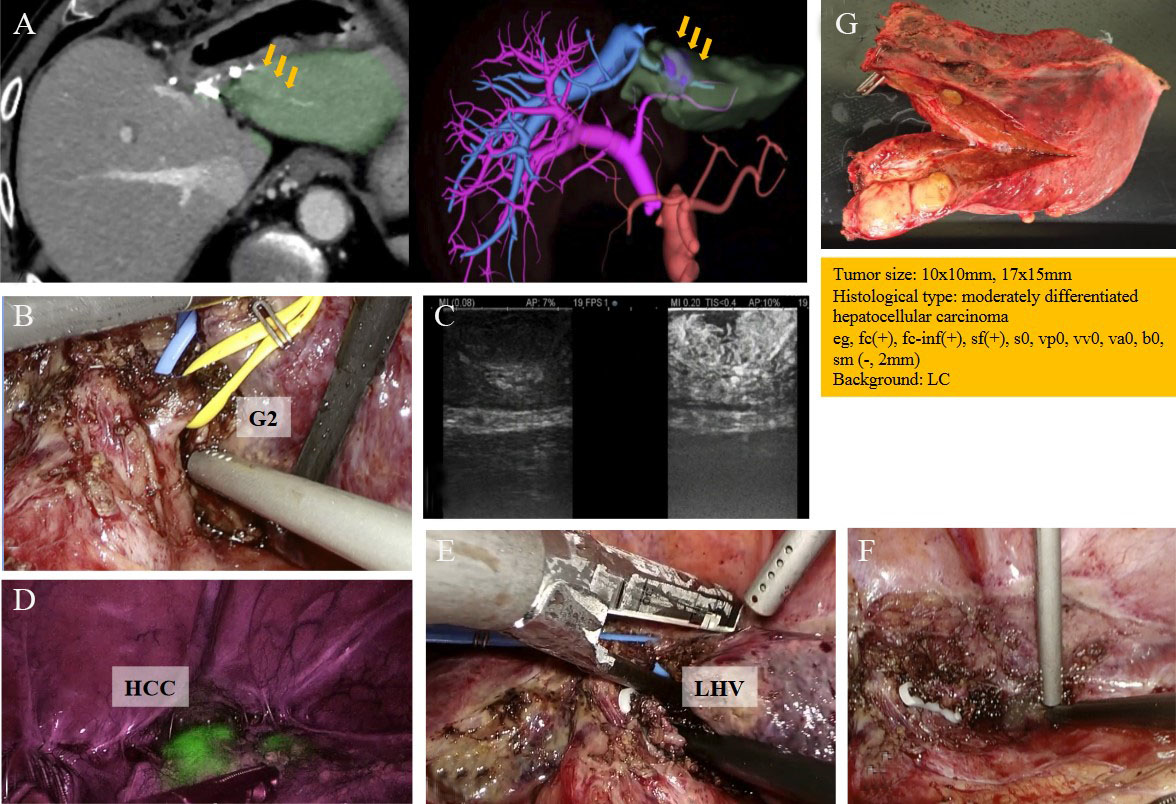 In the treatment of HCC, eradication of intrahepatic metastasis with vascular invasion is one of the most important considerations. AR, taking into consideration both the preservation, to the maximum extent possible, of liver functional parenchyma and eradication of intrahepatic metastasis, would be a theoretically reasonable procedure[1]. In the present case, in which we performed anatomical resection, HCC recurred in the neighboring segment twice, even though pathological vascular invasion and marginal remnants were not confirmed. As a result, we performed a left lobectomy. This may suggest a limitation of cone unit resection and subsegmentectomy. The anatomical boundary between Segments 4a and 4b is extremely difficult to identify in appearance because there is no clear hepatic vein that serves as a landmark on the border, and the Glissonean branches from the umbilical portion of portal vein to Segment 4 show diversity and are often radial. Conversely, ICG visualizes difficult transection boundaries and ultimately allows for liver parenchyma-sparing anatomic resection of the exact cancer-bearing region[9]. In fact, ICG often revealed that the transection borders in the deep layer as intersegmental planes were not flat but uneven. Although the liver parenchyma-sparing anatomic resection was performed accurately with adequate margins for the present case, oncologic radicality may have been inadequate. We should study further the anatomy of Segment 4.

Despite no vascular invasion, detailed histopathological examination in our institution suggested that the recurrence patterns in this case were not multicentric occurrences based on liver cirrhosis but intrahepatic metastasis because the pathological structures of the specimen following three repeat resections were similar to each other in terms of differentiation. A genetic examination may be required to confirm the similarities for a definitive diagnosis. Many previous studies reported that, compared to major open liver resection, laparoscopic liver resection has short-term clinical advantages, including reduced blood loss, lower postsurgical morbidity, and shorter hospital stay for HCC, and the long-term oncological outcomes were comparable in both groups[10-12]. The oncological significance and advances in subsegmentectomy and cone unit resection should be investigated in the future.

Laparoscopic repeat LAR for recurrent HCC could be a safe and feasible procedure, as suggested by previous systematic reviews and meta-analysis[13-15]. We believe that the important points for making the next operation easier with a few adhesions of the abdominal wall and hilum of the liver include no extra mobilization, no ischemic area should be left by performing anatomical resection, to spray a spray-type anti-adhesion barrier (Ad Spray type L®, TERUMO Corp, Tokyo, Japan) on the remaining liver and hilum of the liver, and low intraoperative bleeding. In addition, the laparoscopic procedure might be good for the dissection of adhesion due to its magnification.

In conclusion, we report the case of a patient with HCC who received full LAR three times. Laparoscopic repeat LAR for recurrent HCC could be a safe and feasible procedure. We should investigate the oncological significance and advancements in subsegmentectomy and cone unit resection, in the future.

Data supporting our Report are deposited in our database and are available at request via contat with our corresponding author.

All authors declared that there no conflicts of interest.

At our Institution, the day before surgery all patients sign an informed consent which comprehends data collection in anonymized form (video recording included), so no external ethical approval was necessary in this case.

Written informed consent was obtained from the patient before the surgery. 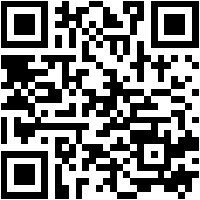