The narrow ridge from liver damage to hepatocarcinogenesis

This article belongs to the Special Issue Research on the Risk Factors of Liver Cirrhosis Complicated with HCC
Views:753 |  Downloads:241 |  Cited:

© The Author(s) 2021. Open Access This article is licensed under a Creative Commons Attribution 4.0 International License (https://creativecommons.org/licenses/by/4.0/), which permits unrestricted use, sharing, adaptation, distribution and reproduction in any medium or format, for any purpose, even commercially, as long as you give appropriate credit to the original author(s) and the source, provide a link to the Creative Commons license, and indicate if changes were made.

Globally, hepatocellular carcinoma (HCC) is associated with a poor prognosis due to frequent diagnosis in late stages. As a result, mortality is roughly equivalent to the annual incidence. Regardless of etiology, the development of liver cirrhosis is the most relevant cause of hepatocarcinogenesis[1]. Chronic hepatitis B virus (HBV) infection and nonalcoholic steatohepatitis (NASH) are associated with a significantly increased risk of developing HCC even in the absence of cirrhosis[2]. Recent data demonstrate that NASH has to be considered as the main cause of the increasing incidence of HCC predicted for the next decades[3]. Thus, against the background of high mortality, the need for optimized HCC screening strategies arises on the one hand, while, on the other hand, previous treatment concepts have to be adapted to the sometimes therapy-limiting comorbidities of these patients.

The global prevalence of non-alcoholic fatty liver disease (NAFLD) is estimated to be 25%, although this figure may still be underestimated due to an assumed high number of unreported cases[4]. In approximately 10%-15% of NAFLD patients, progression to NASH can occur, which in turn can lead to higher-grade fibrosis and, in the final stage, to cirrhosis and HCC[5]. Approximately 20% of all NASH-associated HCC cases develop in the absence of overt cirrhosis[6]. According to the most recent epidemiological studies, NASH is considered as the main cause of the steadily increasing incidence of HCC in Western industrialized nations[7]. Recent data from a United States cohort show a 10-year cumulative HCC risk of 1.7 per 1000 NAFLD patients. In NASH patients, HCC risk was increased 8.6-fold compared with healthy subjects. Patients with NAFLD-associated cirrhosis showed a further significantly increased risk of HCC, with an annual incidence of 0.8%-2.3% per year. Of note, prevalence of type II diabetes mellitus (T2DM) and obesity appear to be independent HCC-predisposing risk factors in the context of NASH-associated metabolic syndrome. Furthermore, in NASH patients, initial HCC diagnosis is frequently made at later tumor stages because they are monitored less intensively due to the absence of, or less advanced, cirrhosis[8].

Human hepatocarcinogenesis is always a multifactorial event. Environmental influences (e.g., alcohol and smoking) and host factors (age, gender, familial predisposition, obesity, diabetes, and fibrosis) interact with genetic, immunological, and viral factors in a complex interplay in HCC development. In the context of DNA sequence changes in the form of mutations, resistance of proliferating hepatocytes to programmed cell death (apoptosis) occurs, allowing mutant cells to proliferate[9] [Figure 1]. In addition, in NASH, chronic hepatic inflammation represents a cirrhosis-independent trigger of hepatocarcinogenesis. It is a complex, multifactorial process involving various risk factors (genomic instability, obesity, and T2DM). An understanding of the various key molecular initiation and progression mechanisms of hepatocarcinogenesis is essential to define etiology-adapted therapeutic targets in the future. 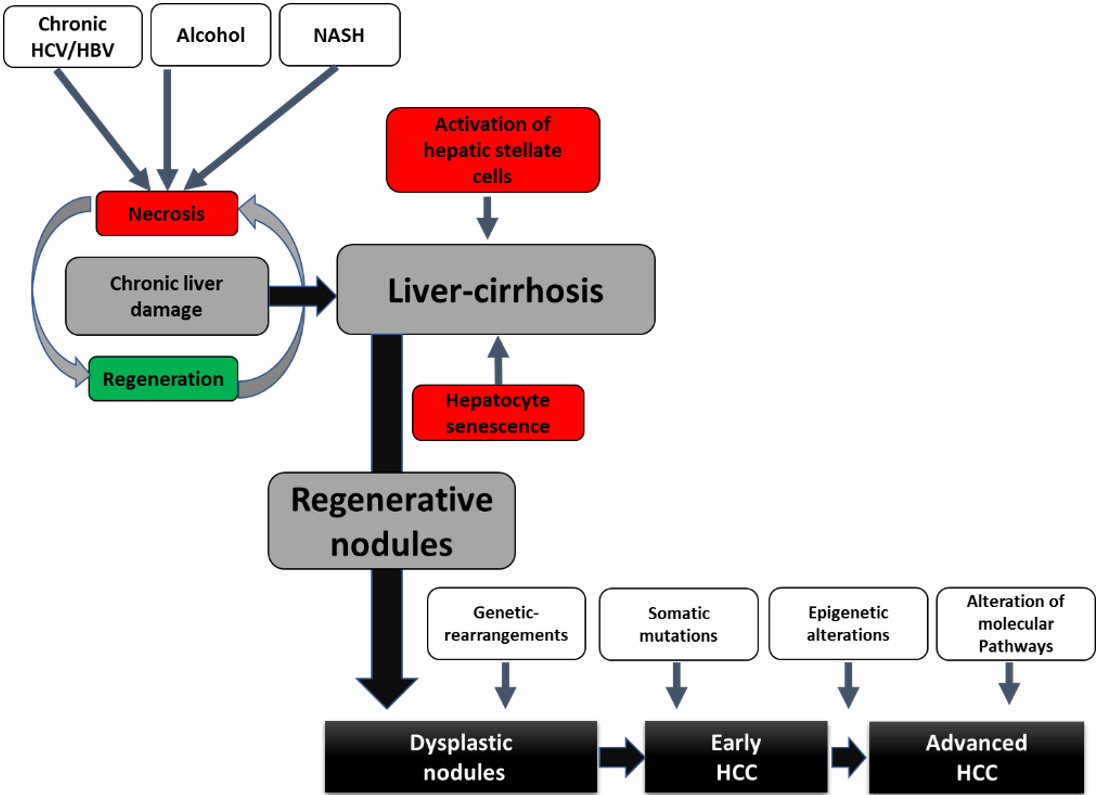 Routine ultrasound (US) of the liver for HCC screening exhibits distinct limitations in terms of diagnostic value. Smaller lesions show limited detectability in the cirrhotically remodeled or steatotic liver. Determination of HCC biomarkers, such as alpha-fetoprotein (AFP), has the advantage of being investigator independent and to provide reproducible results. However, not all international guidelines recommend AFP determination in addition to US, since sensitivity of AFP in HCC detection ranges from 39% to 65% only[10]. To facilitate sensitivity superior to the combination of US and AFP while maintaining good specificity in early HCC detection, a large number of studies investigated the suitability of different biomarkers, such as osteopontin, glypican-3, the AFP variant binding to the lectin molecule “Lens culinaris agglutinin” (AFP-L3), and Des-gamma-carboxy prothrombin (DCP) for HCC surveillance[11-14]. As s result, a statistics-based model called GALAD score, including patients gender, age, AFP, AFP-L3, and DCP, was developed. It clearly demonstrated superior sensitivity and specificity compared to assessment of biomarkers individually and was extensively validated in international studies[15,16]. In addition, GALAD scores’ utility in HCC early detection was specifically tested in an international multicenter trial in a NASH population; it was able to detect HCC even at early stages (BCLC 0/A) and achieved an AUC of 0.91. Furthermore, in a prospective NASH pilot trial, it could be demonstrated that GALAD was already elevated up to 1.5 years before the initial diagnosis of HCC was made by imaging procedures. Those encouraging results implicate that the GALAD model is suitable for HCC early detection of all etiologies, including NASH[17]. Only earlier HCC detection, predominantly in the emerging high-risk cohort of patients with NASH, T2DM, and obesity, can facilitate curative treatment options for this population. Further phase IV prospective trials are urgently warranted to determine whether GALAD has potential as an integral part of HCC screening algorithms in the near future.

Currently, HCCs are frequently diagnosed at advanced stages when curative therapy options such as liver resection or transplantation are unavailable. In addition to established palliative, locoregional therapies, such as conventional transarterial chemoembolization (TACE), alternative transarterial procedures such as selective internal radiotherapy (SIRT) are also available [Figure 2]. Recent randomized clinical trials (RCT) showed no survival benefit for SIRT over systemic therapy in patients with advanced HCC[18]. A meta-analysis on the latest RCTs in contrast could demonstrate that SIRT is non-inferior to standard of care systemic therapy in terms of overall survival (OS) while offering an adequate safety profile with fewer side effects. Furthermore, patients with advanced HCCs arising in NAFLD may not be suitable for systemic therapy due to metabolic syndrome-related diseases. Here, SIRT exhibited similar survival outcomes at a comparable toxicity profile in HCC patients with NAFLD and HBV, implicating that NAFLD-associated metabolic comorbidities do not represent limitations for SIRT. 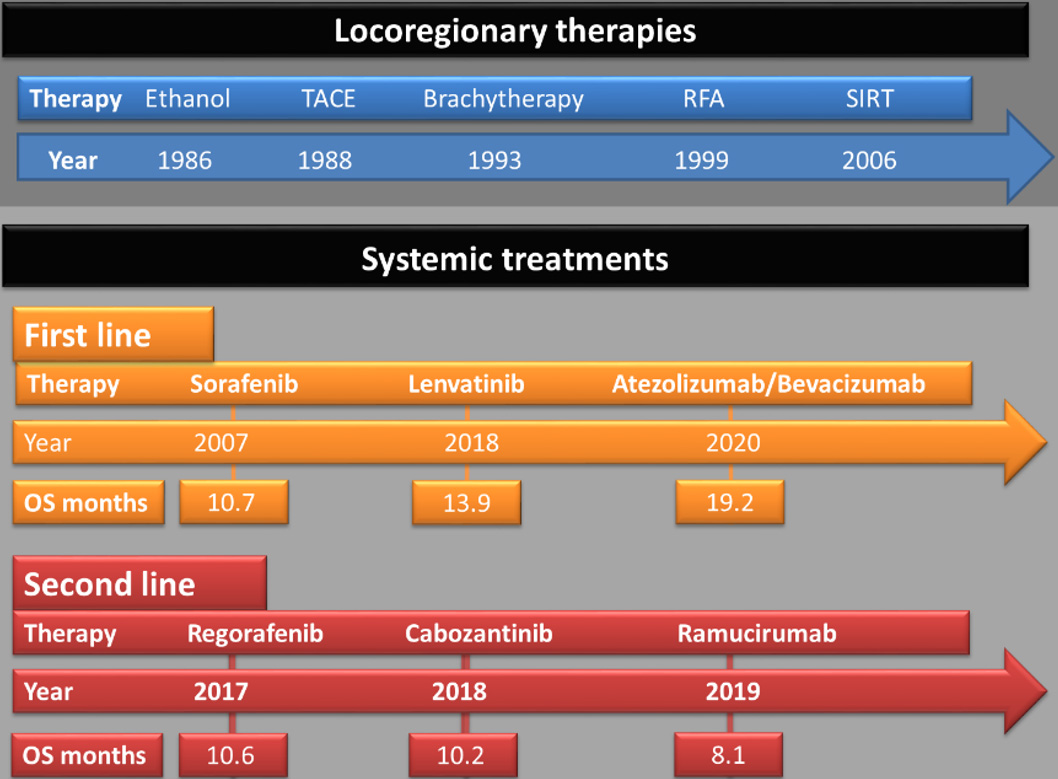 Advanced HCCs at stage BCLC C, ineligible for surgical or local therapy due to vascular infiltration or extrahepatic tumor burden, have to be treated with systemic therapy. Only recently, several substances over three lines of therapy have become available [Figure 3]. In 2007, the multityrosine kinase inhibitor sorafenib was approved for the treatment of advanced HCC in the phase III SHARP trial; here, for the first time, an antiproliferative therapy was able to significantly prolong the OS compared to placebo treatment (OS sorafenib 10.7 months vs. placebo 7.9 months)[19].

However, in terms of clinical management, there are distinct safety concerns for several patients, particularly those who have cardiovascular disease in the setting of NASH-associated metabolic syndrome. In particular, typical TKI side effects, such as poorly controlled arterial hypertension, fatigue, weight loss, hand-foot-skin syndrome, and diarrhea, often lead to the need for dose reduction or therapy interruption. A non-TKI-based treatment option for a subset of HCC patients with an elevated AFP-level (≥ 400 ng/mL) is ramucirumab, a fully human anti-VEGFR-2 monoclonal antibody. In a phase III second-line study after sorafenib progression (REACH-II study), ramucirumab showed a significantly prolonged OS in patients with high AFP (OS after progression on sorafenib: ramucirumab 8.5 months vs. placebo 7.3 months)[23].

Immunotherapy of tumors with immune checkpoint inhibitors has also shown encouraging results in a variety of tumor diseases. In a phase III study (IMbrave150), the combination of a checkpoint inhibitor (atezolizumab) with a VEGF antibody (bevacizumab) compared with sorafenib treatment significantly improved OS in first-line HCC therapy of HCC[24]. Furthermore, a better quality of life was documented compared to sorafenib. Thus, this was the first positive phase III study to show an OS benefit in favor of cancer immunotherapy in this tumor entity and represents the first landmark therapeutic advance in more than a decade.

Conception or design of the work, drafting the article: Best J

Critical revision of the article, final approval of the version to be published: Best J, Gerken G

Both authors declared that there are no conflicts of interest. 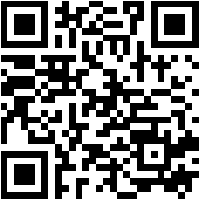