Over the past 20 years the use of laparoscopy has revolutionized hepatic surgery and, in recent years, robotic assistance to the laparoscopic approach has been explored by some centres. Since its approval, there has been a prodigious increase in robotic utilization for surgical operations worldwide[1,2]. As its use continues to increase, assessment of efficacy and outcomes is an area of active study.

Preliminary inquiries into robotic-assistance in surgical procedures began in the late 1980s with a robot designed to perform neurosurgical biopsies with improved precision[3]. Innovation accelerated shortly thereafter as multiple governmental organizations, including the United States Army and National Air and Space Administration, became interested in telesurgery - the capability for a surgeon to operate on a physically distanced patient using a robotic interface[4,5]. Expertise and technology devised from these efforts later facilitated development of commercial robotic surgical systems for civilian use, including the ROBODOC[6], AESOP system[7], Zeus[8], ARTEMIS[9] and the da Vinci Surgical System[10].

Currently, the most widely used robotic platform worldwide is the da Vinci Surgical system, first approved for use in general laparoscopic surgery by European regulatory agencies in 1999, followed shortly thereafter by the United States Food and Drug Administration in 2000. Initially reserved for smaller operations such as cholecystectomy, the robot is now used for a wide variety of operations ranging from inguinal herniorrhaphy to major hepatectomy. Many surgeons perceive advantages when using robotic systems, which may explain this increased utilization[11]. These include wristed articulated instruments, 3-dimensional high definition optics, improved surgeon ergonomics, diminished surgeon fatigue, as well as a shortened learning curve compared to standard laparoscopic liver surgery. Several disadvantages are emphasized by detractors of the robotic technique, including the need for experienced teams, substantial acquisition and operational costs, and concerns over lack of benefit over standard laparoscopic surgery[12,13].

Robot-assisted laparoscopic liver resection (RALLR) was first described in the 2000s[14], with the initial landmark case series of 70 patients reported by Guilianotti and colleagues in 2010[15]. The indications for RALLR mirror those of the standard laparoscopic approach, including resection of both benign and malignant tumours in patients who can tolerate general anaesthesia and prolonged pneumoperitoneum. Over the last two decades, numerous single and multi-institutional case series have reported outcomes of RALLR in high-volume centres, demonstrating it to be safe, feasible, and effective for minor and major hepatectomies[16]. Compared to standard laparoscopic liver resection, perioperative outcomes including operative time and estimated intraoperative blood loss have been shown to be higher in RALLR, but the open conversion rate, R0 resection rate, hospital length of stay, morbidity and mortality are no different than standard laparoscopic hepatectomy[17]. Indeed, RALLR recapitulates the main benefits observed with standard laparoscopic hepatectomy in comparison to open hepatectomy, including reduced postoperative complications and shorter length of stay without compromising oncological outcomes such as radical resection rate, overall survival, and disease-free survival rate[18,19]. The accumulation of evidence supporting RALLR resulted in international consensus guidelines promoting the development and standardization of robot-assisted laparoscopic hepatectomy in 2018[20].

RALLR is indicated for resection of all liver tumour types including hepatocellular carcinoma (HCC). It has been demonstrated to be safely performed for patients with HCC who have well-compensated cirrhosis without signs of severe portal hypertension. Evidence examining the safety and oncological effectiveness of RALLR for HCC is accumulating, with a systematic review published in 2018 highlighting the favourable short-term outcomes reported in over 300 patients from 10 institutional series[21]. In the largest series examining RALLR for HCC to date, Chen et al.[22] performed a propensity score matching analysis of 81 RALLR and 81 open liver resections for HCC. In this report, which included approximately 40% major hepatectomies, operative time was longer in the RALLR compared to open cohort (median of 343 min vs. 220 min). However, the intraoperative blood loss (median 282 mL vs. 263 mL), percent of patients requiring an intra-operative blood transfusion (7.4% vs. 3.7%), and postoperative complications (4.9% vs. 3.7%) were comparable between the two techniques. Notably, the authors observed a significantly reduced length of hospital stay (median 7.5 days vs. 10.1 days), reduced patient-controlled analgesia use on postoperative day 1 and during initial ambulation in the RALLR compared to open hepatectomy cohort. Similar outcomes have been observed in other institutional cohorts; however, it is worth noting that these early published series come from high-volume institutions with extensive experience with laparoscopic liver resection, potentially limiting the generalizability of these findings.

Given the relatively recent adoption of RALLR, studies examining the long-term oncological outcomes in patients after resection for HCC are limited. An early and available outcome that many authors examine as a surrogate for oncological efficacy is the R0 resection rate, as a positive histological margin is known to be associated with a higher incidence of postoperative recurrence in HCC[23]. R0 resection rate may also serve as a hallmark of technical feasibility, as lower R0 resection may indicate suboptimal technical skill or an inherent limitation of the technology (i.e., inability to palpate tumour with minimally invasive approach). Published RALLR R0 resection rates are high, ranging from 85%-100% in most series[16]. In regard to long-term oncological outcome data, four of the largest studies examining RALLR for HCC report disease-free survival and overall survival ranging from 72% to 75% and 93% to 98% at 2 and 3 years postoperatively, respectively[24-26]. These mid-term oncological data are encouraging, but will need confirmation with longer-term outcome reporting.

The modern liver surgeon is afforded with numerous technical approaches to the resection of liver tumours. Although several matched comparisons and meta-analyses have been performed examining the differences between RALLR and several types of laparoscopic liver resection (LLR), many of these are limited by retrospective design and confounded by selection biases[27]. One of the largest studies comparing RALLR and LLR matched 57 RALLR to 114 LLR based on background liver disease, extent of resection, diagnosis and other patient demographic factors[28]. The authors concluded that RALLR and LLR displayed similar safety and feasibility for hepatectomies, but that more resections approached robotically were completed totally minimally invasively compared to LLR, with a significant proportion of their LLR cohort requiring hand-assist port. The clinical impact of hand-port utilization on postoperative pain and quality of life is unclear. Magistri et al.[29] compared RALLR and LLR specifically for HCC and reported similar outcomes between both approaches.

A specific indication where RALLR may be advantageous to standard LLR is the resection of liver segments in the posterosuperior segments (S1, S4A, S7, S8), which are difficult to approach by standard LLR. Challenges in these approaches for standard LLR include poor visualization, difficulty in haemorrhage control, as well as deep, curved or angled parenchymal transection planes associated with the posterior location of these segments. Although tumourectomies and segmentectomies of these segments can be feasibly approached laparoscopically, they often require expert skill and invasive manoeuvres (i.e., transpleural approach), potentially limiting their generalizability[30,31]. Laparoscopic right hepatectomy is often the preferred approached to resections of these lesions since it is technically less challenging. Several studies have evaluated RALLR for parenchymal-sparing resection of lesions in the posterosuperior segments, with authors concluding that RALLR does indeed offer specific advantages to standard LLR and may serve as an alternative to open resection for these lesions[32-36]. A review of our institutional series of over 250 RALLR similarly corroborate these findings.

Enhanced efficacy of systemic therapies has provided significant benefit for patients with primary and secondary hepatic malignancies and highlighted the importance of parenchymal sparing resections when performing hepatectomy, as more patients may benefit from resection of intrahepatic recurrence. This trend in management has challenged liver surgeons to totally extirpate tumours while preserving maximal liver parenchyma, which is often damaged following numerous rounds of systemic chemotherapy, to allow for future liver-directed therapies. Performing these resections from a minimally invasive approach may be advantageous to survival by minimizing postoperative complications and potentially expediting a return to adjuvant therapy, although additional confirmatory data are needed. Nevertheless, it is appealing to speculate that performing minimally invasive parenchymal-sparing liver resections is advantageous for certain liver cancer patients. 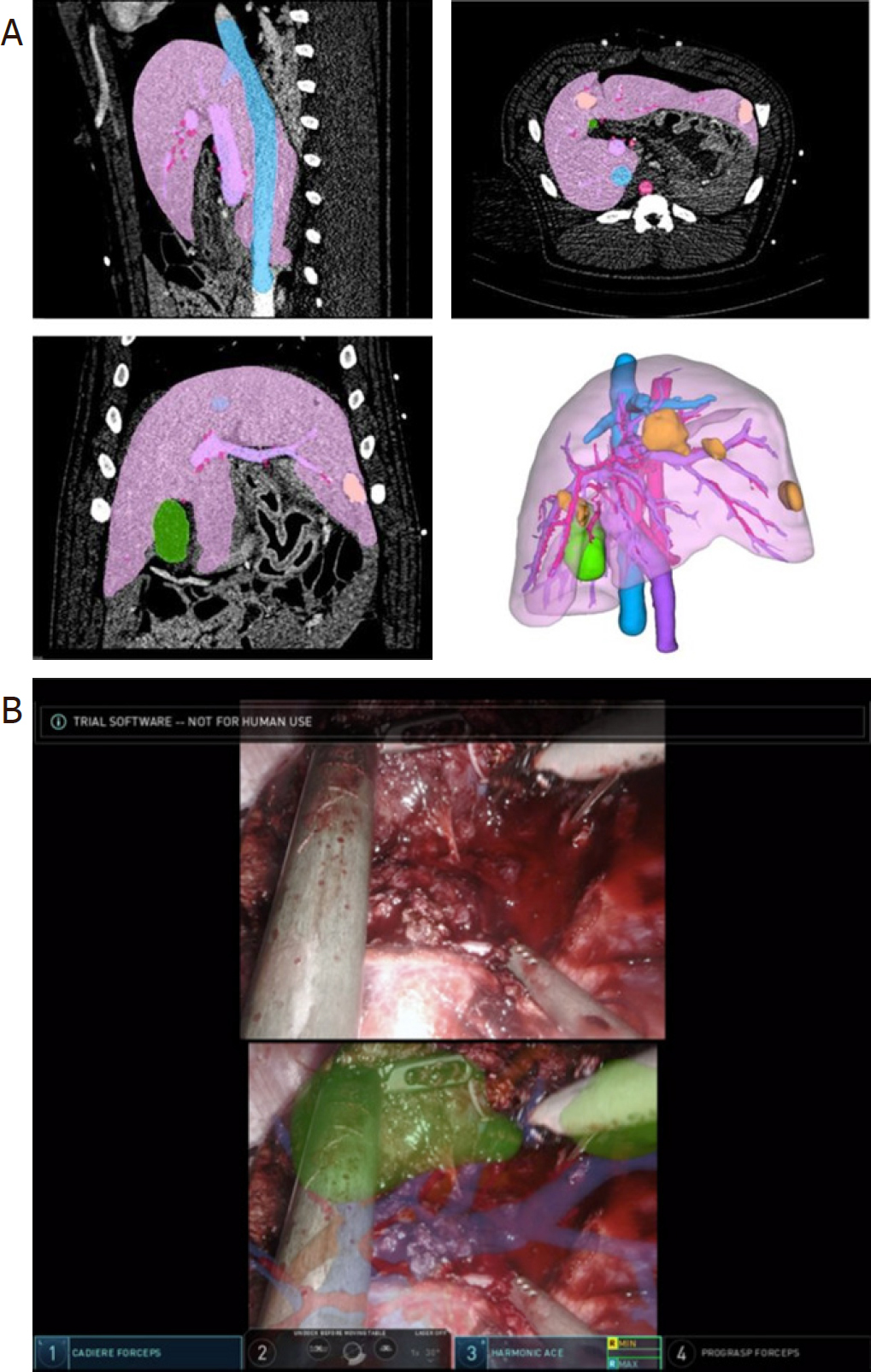 Figure 1. Real time navigation on da Vinci surgeon console. A: interactive three-dimensional anatomic representations are developed from the patient’s preoperative imaging; B: 3D representations overlaid onto the surgeon’s console in a porcine model to reveal the tumour’s location in relation to the vascular and biliary structures in real-time. This technology can enhance the surgeon’s ability to visualize the anatomy and perform a margin negative resection. Video and images courtesy of Intuitive. The da Vinci technology presented is still in development, is not 510(k) cleared and the safety and effectiveness of the product has not been established. The technology is not currently for sale in the US

In conclusion, RALLR is a safe and effective approach to the minimally invasive resection of hepatic malignancies. In experienced hands, it is equivalent to the standard laparoscopic approach to anterior and inferior hepatic segments and may provide benefits over standard laparoscopy during resections in posteriorly and superiorly located tumours.

Made substantial contributions to conception and design of the study and performed data analysis and interpretation: Labadie KP, Park JO, Sham JG