CT and MRI of the liver for hepatocellular carcinoma

Computed tomography (CT) and magnetic resonance imaging (MRI) are commonly used modalities for the imaging based diagnosis and staging of hepatocellular carcinoma (HCC). The Liver Imaging Reporting and Data System (LI-RADS) was initially released in 2011 in an effort to standardize the interpretation and reporting of these studies in patients at increased risk for the development of HCC. With the release of LI-RADS v2018, LI-RADS has reached two important milestones - 10 years since the formation of the American College of Radiology supported LI-RADS committee and integration of LI-RADS into the 2018 American Association for the Study of Liver Disease practice guidance for HCC. In this article, we will discuss recent changes to LI-RADS with v2018, technical recommendations for the performance of CT and MRI in patients at risk for HCC, and critical imaging features in the LI-RADS algorithm.

LI-RADS was originally developed to provide a consistent method of conveying relative concern for the presence of hepatocellular carcinoma (HCC) or other malignancies based on Computed tomography(CT) or magnetic resonance imaging (MRI) of a patient at increased risk of developing HCC[1,2]. This relative concern for HCC, malignancy, or tumor in vein is conveyed by the different categories shown in Table 1. Liver Imaging Reporting and Data System (LI-RADS) v2018 has now evolved to also include guidance for the evaluation of contrast-enhanced ultrasound, screening ultrasound, and CT and MRI following locoregional therapy for HCC. LI-RADS v2018 also includes technical recommendations for the performance of CT and MRI for the evaluation of HCC. The development of LI-RADS has been in the context of patients with cirrhosis, chronic hepatitis B infection without cirrhosis, or a history of prior HCC. LI-RADS should not be used in patients with vascular causes for their cirrhosis due to the decreased specificity of arterial hyperenhancement for malignancy in these patients[3].

The LI-RADS algorithm provides a step by step approach for consistent categorization of observations seen on CT and MR imaging of patients with cirrhosis, chronic hepatitis B viral infection, or a history of HCC[4]. Observations that are definitely benign (LR-1) or probably benign (LR-2) can be categorized based on typical imaging features associated with specific benign entities, such as hepatic hemangiomas, cysts, or perfusion alterations. Observations that demonstrate imaging features suggestive of malignancies other than HCC are categorized as LR-M. These imaging features include peripheral washout appearance, targetoid restricted diffusion, and rim arterial phase hyperenhancement. Observations that are not initially categorized as LR-NC, LR-1, LR-2, LR-M, or LI-RADS Tumor in Vein (LR-TIV) are then categorized using the LI-RADS Diagnostic Table [Figure 1]. The diagnostic table guides the radiologist to category LR-3, LR-4, or LR-5 based on the presence or absence of major features as discussed in further detail below.

Although an update to LI-RADS was released in 2017, a new version was released only a year later to allow for two changes to CT/MRI LI-RADS. Both changes were made to allow for unification between LI-RADS and American Association for the Study of Liver Disease (AASLD) practice guidelines. The first change was the definition of threshold growth. Previously, threshold growth was defined as ≥ 50% size increase of a mass in ≤ 6 months, ≥ 100% increase in size over > 6 months, or a new ≥ 10 mm observation developing in ≤ 24 months. The definition of threshold growth in LI-RADS v2018 is now restricted to only ≥ 50% increase in size of a mass over ≤ 6 months. This stricter definition is now concordant with growth criteria used by the AASLD and the Organ Procurement and Transplantation Network (OPTN). The second change was to the categorization of 10-19 mm observations with arterial phase hyperenhancement and one additional major feature in the LI-RADS Diagnostic Table. Previously, these observations were categorized based on which imaging features were present and required the use of “-g” and “-us” added to the LR-5 to specify the features used. This portion of the table has now been simplified so that if a 10-19 mm observation with arterial phase hyperenhancement also demonstrates nonperipheral “washout” or threshold growth, it is categorized as LR-5. If a 10-19 mm observation with arterial phase hyperenhancement only demonstrates the additional feature of an enhancing “capsule”; however, it is designated as LR-4.

Consistent imaging techniques are necessary to enable reproducibility of LI-RADS categories between radiologists at different institutions. The wide variety of equipment, technical parameters, and sequences available throughout the world can lead to difficulty in evaluating critical imaging features for LI-RADS category assessment. To address these inconsistencies, the Technique Working Group of LI-RADS has developed minimum technical requirements for the performance of CT and MRI in patients at risk for developing HCC, summarized in Tables 2 and 3[5].

Vascular phases for CT and MRI

Multiphase contrast enhanced imaging is required to make the imaging diagnosis of HCC (LI-RADS 5) confidently and adequately evaluate the regional vascular anatomy and patency. Pre-contrast imaging provides information on pre-existing hyperattenuating and T1 hyperintense material, which are often seen as a sequelae of locoregional therapies. This bright material can obscure or mimic enhancement on post-contrast phases. Although pre-contrast T1-weighted imaging is required for MRI, a pre-contrast phase is optional for CT imaging unless the patient has had locoregional therapy due to the low likelihood of pre-existing hepatic high attenuation material in a patient without locoregional therapy and associated increased radiation from an additional CT imaging phase. 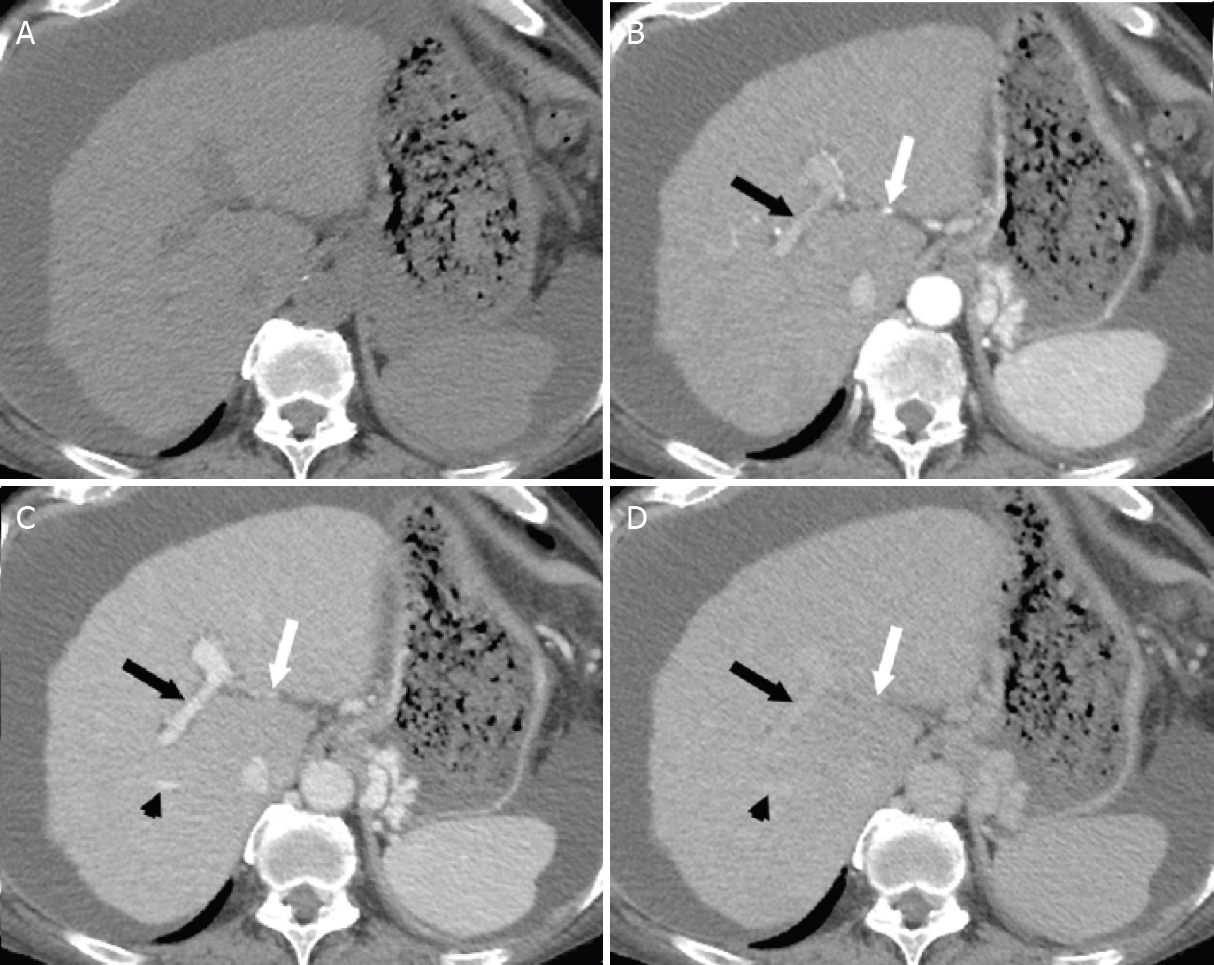 In addition to dynamic contrast enhanced imaging, T2-weighted and unenhanced T1-weighted opposed-phase and in-phase imaging are required for complete evaluation of the liver in patients at risk for HCC. These sequences provide important information regarding the presence of fat, iron, fibrosis, and edema in observations relative to the background liver parenchyma that can contribute to observation conspicuity and enable evaluation for the presence of ancillary features that can enable modification of the final LI-RADS category.

Diffusion weighted imaging provides information regarding relative cellularity of tissues and is also an important sequence for improving the specificity and sensitivity for HCC[8]. Despite the widespread recognition of the importance of diffusion weighted imaging in this setting, however, this sequence remains optional since it is not as widely available and robust as other MRI sequences[5]. An example of an MR exam that meets complete technical requirements for LI-RADS is shown in Figure 3. 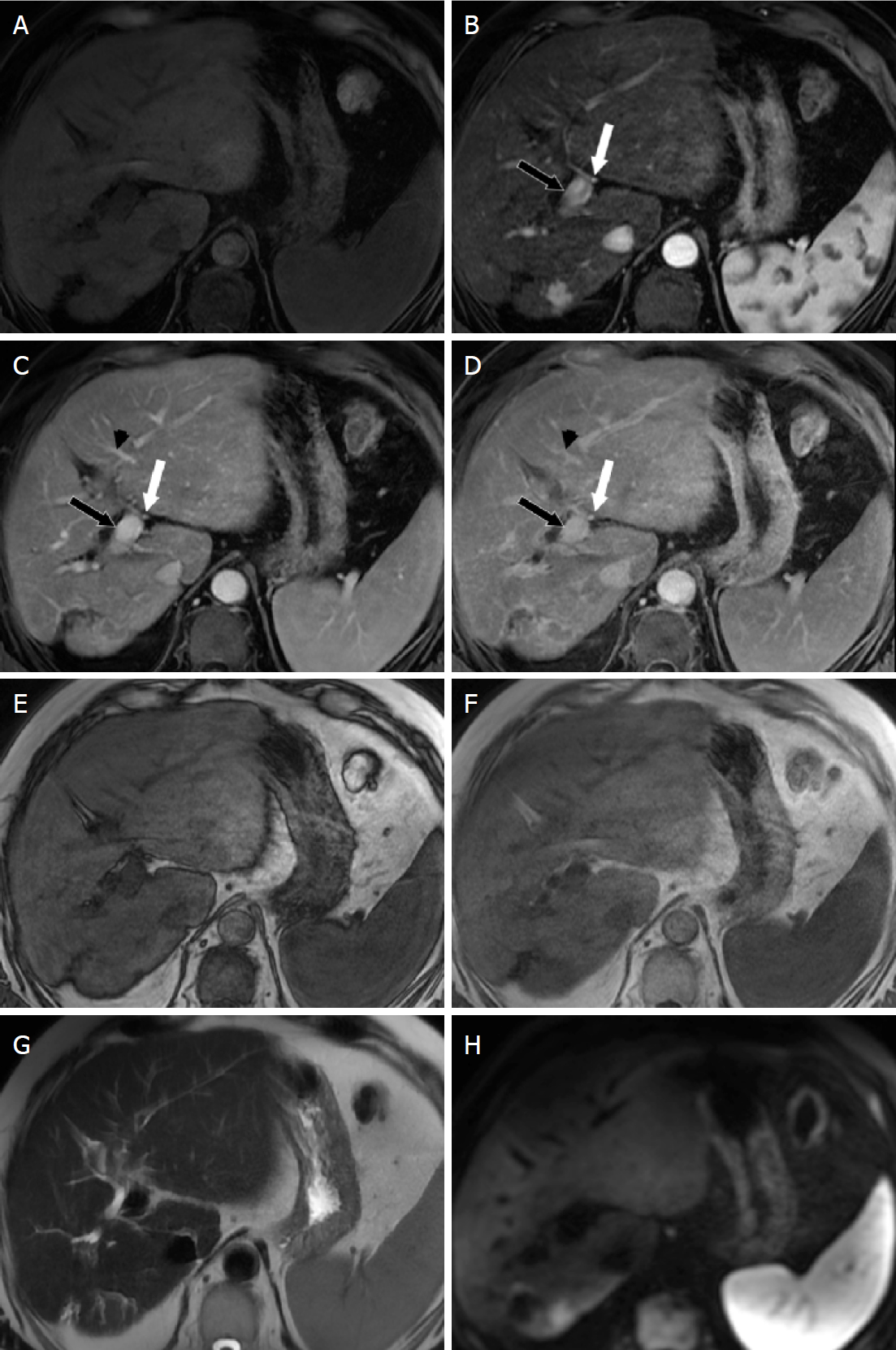 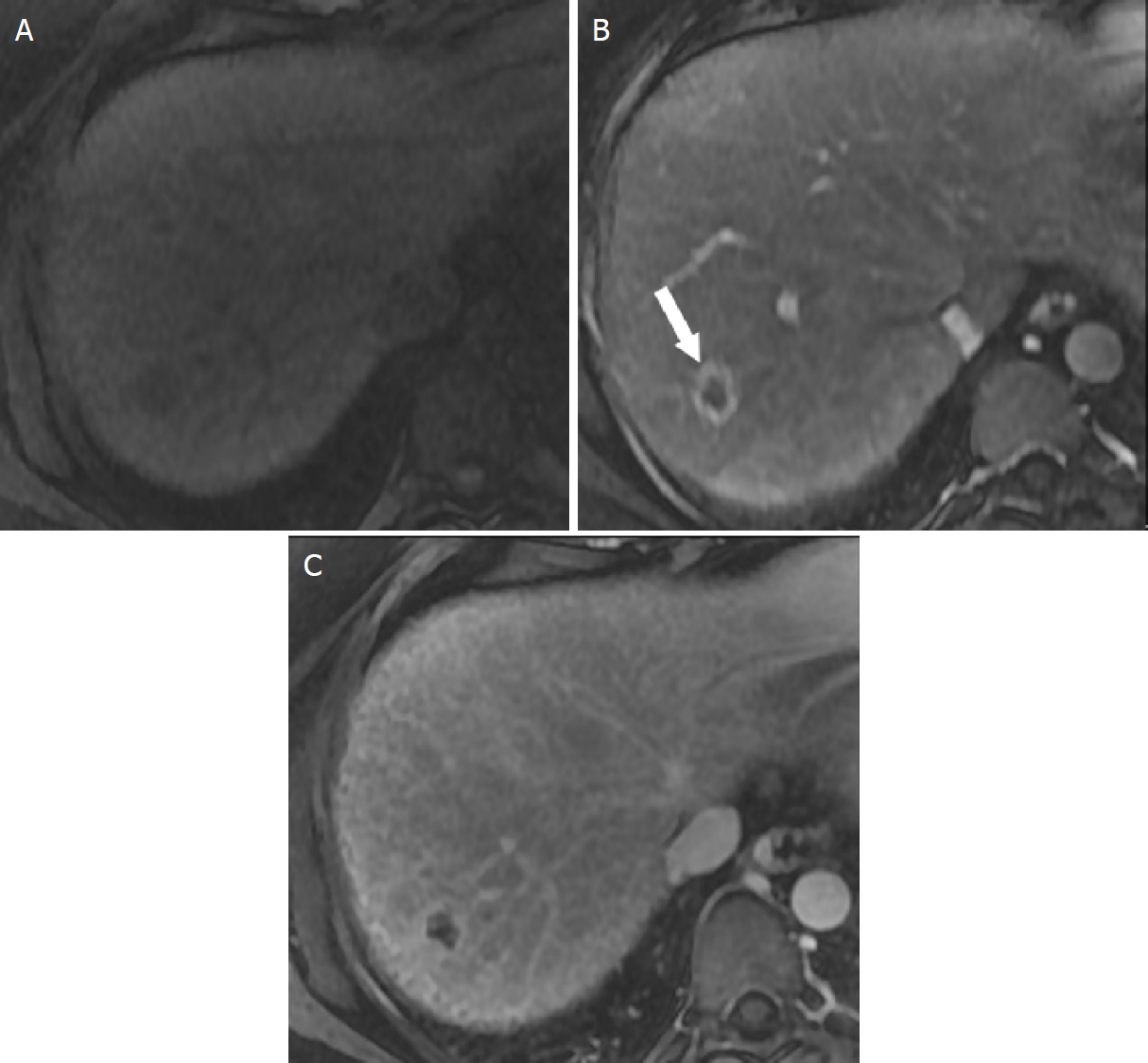 Therefore, only nonrim arterial phase hyperenhancement should be used for the assignment of LR-5 category to an observation.

The term nonperipheral “washout” refers to reduction in enhancement in whole, or in part, within an observation from an earlier post-contrast imaging phase to a later extracellular post-contrast phase. “Washout” (with quotation marks) refers to visual assessment of washout appearance and does not specifically require measurement of enhancement or construction of an enhancement curve. “Washout” in combination with arterial phase hyperenhancement is a highly specific imaging feature of HCC[12,13]. If “washout” is present primarily along the margins of the observation, however, the imaging feature is instead considered peripheral “washout” and is not a major feature due to its association with intrahepatic cholangiocarcinoma[11]. Hypointensity on the transitional or hepatobiliary phases should not be considered “washout” since the high specificity of washout in the literature and its inclusion in LI-RADS has been based on exams performed with ECA. If “washout” is present in an observation prior to the transitional phase on an exam using a hepatobiliary contrast agent, “washout” can be considered present and used as a major feature for LI-RADS categorization.

Enhancing “capsule” describes a smooth uniform border around the majority of an observation margin that is unequivocally thicker or distinct from any fibrotic tissue present elsewhere in the liver. To be considered a major feature, this finding must be present on the portal venous, delayed, or transitional phase of post-contrast imaging [Figure 5]. The term “capsule” is used in place of capsule appearance, since the imaging finding of a “capsule” can be indicative of either a true fibrous capsule or pseudocapsule on histology. Regardless of whether a true capsule or pseudocapsule is present, however, the imaging feature of “capsule” is present in 12%-94% of HCCs[14-17]. 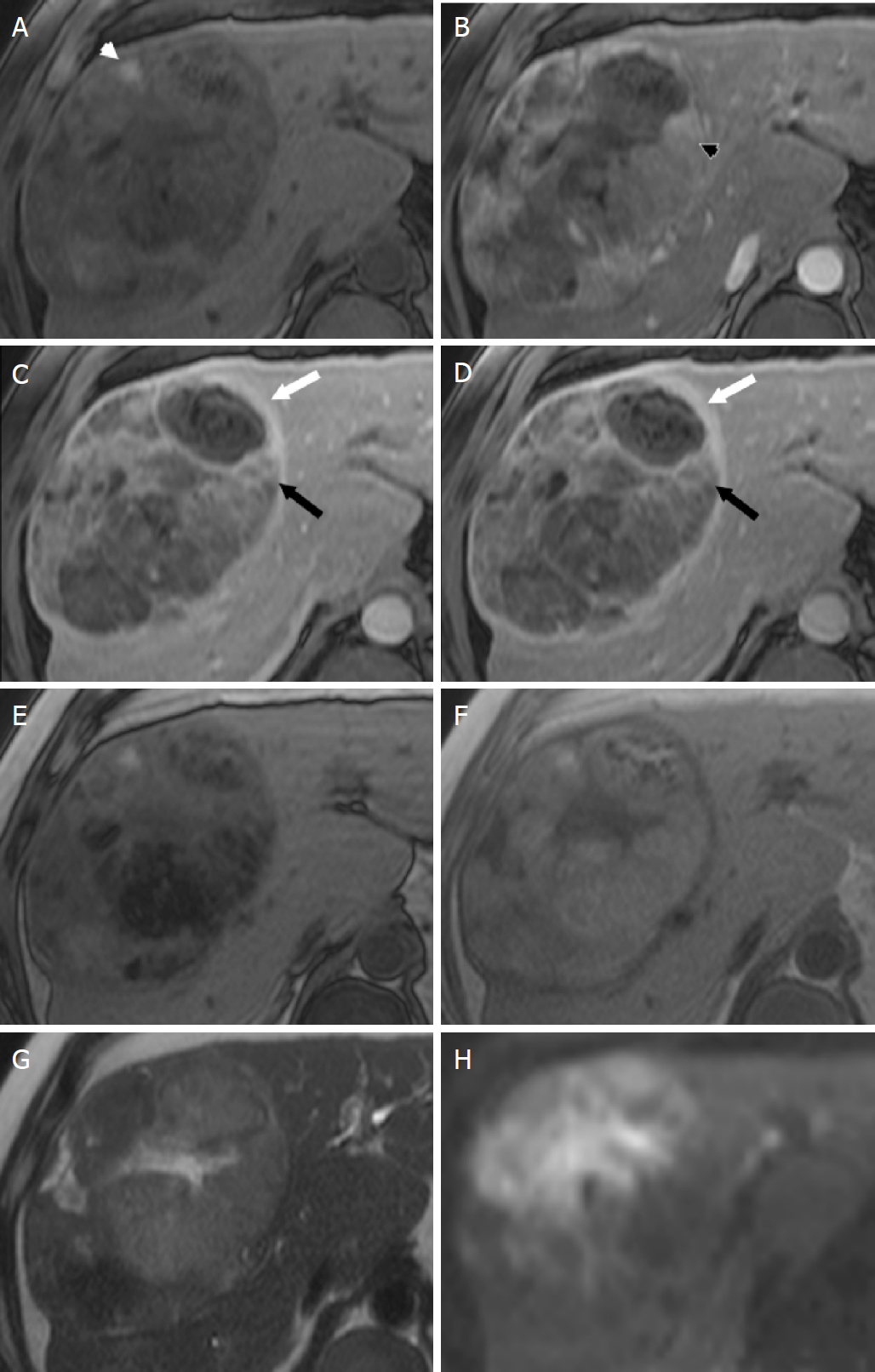 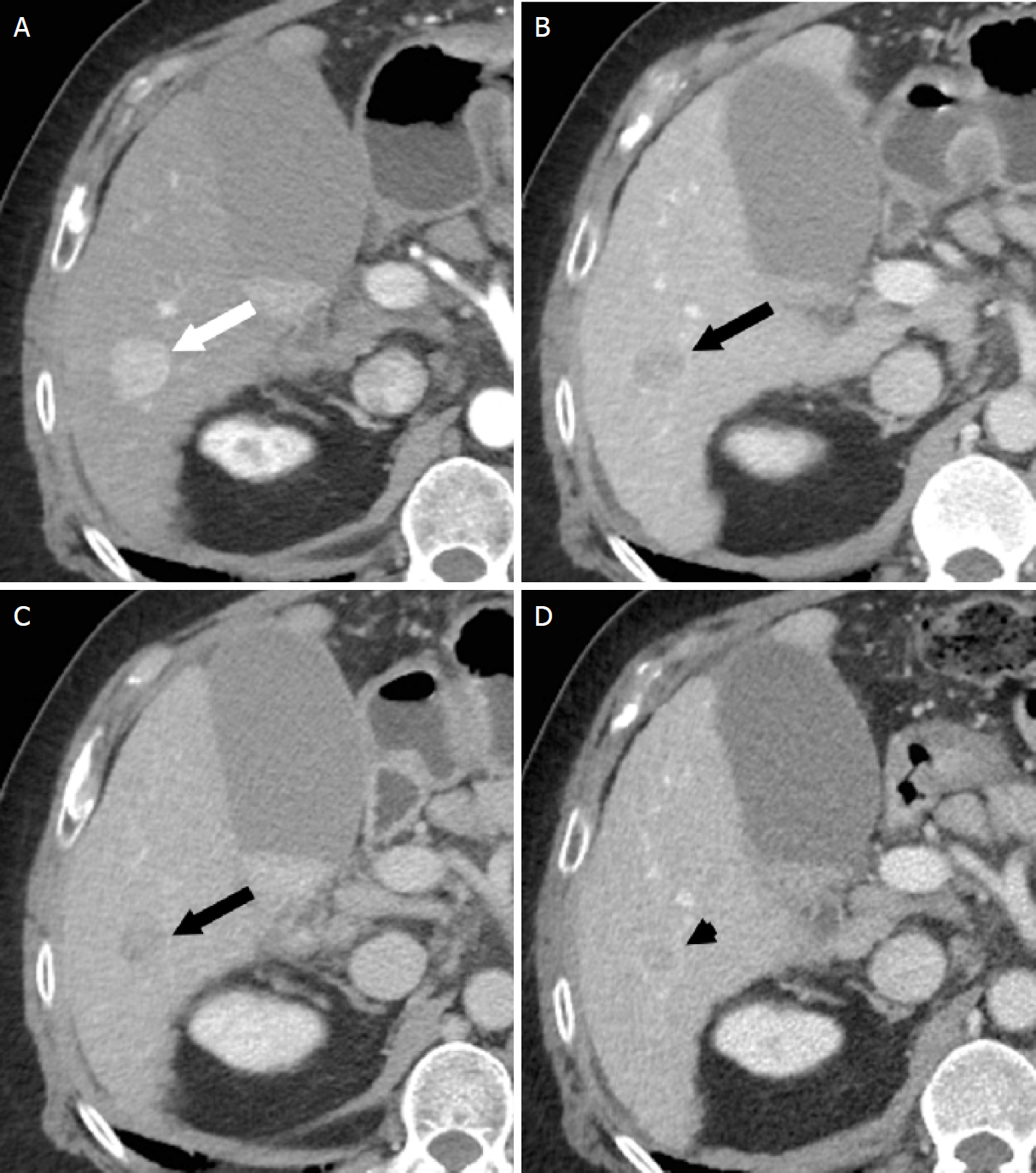 Figure 6. Threshold Growth. Axial CT images of a 21 mm mass in the right hepatic lobe. The mass demonstrates arterial phase hyperenhancement during the arterial phase (white arrow, A), and “washout” with “capsule” (black arrow) on the portal venous (B) and delayed phases (C). Axial CT performed 5 months prior demonstrates a 12 mm mass on the portal venous phase (D, black arrowhead). The interval growth is more than 50% in less than 6 months, therefore, the mass also demonstrates threshold growth. The most appropriate category for this mass is LI-RADS 5. CT: computed tomography; LI-RADS: Liver Imaging Reporting and Data System 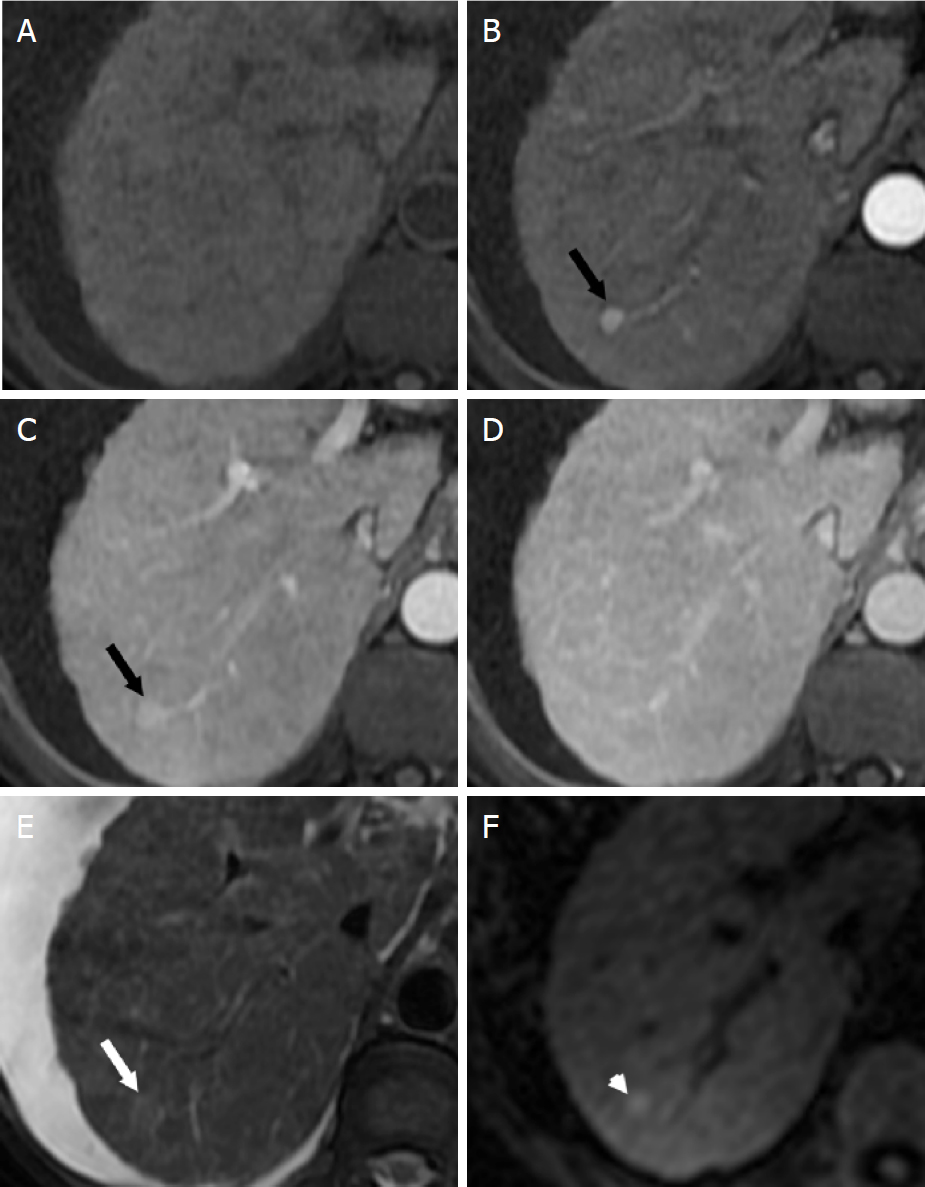 Figure 7. LR-4 - Probably HCC. Axial MR images of a 9 mm observation in the right hepatic lobe. T1-weighted fat saturated images performed prior to (A) as well as during the arterial phase (B), portal venous phase (C), and delayed phase (D) following contrast administration demonstrate arterial phase hyperenhancement (black arrow) of the observation which persists into the portal venous phase. Based on the size and presence of a single major feature, the appropriate category for this observation is LI-RADS 3. The observation also demonstrates mild T2-hyperintensity (white arrow, E) and restricted diffusion (white arrowhead, F). The presence of ancillary features suggestive of malignancy then allow the radiologist discretion with changing the category to LI-RADS 4 to reflect higher suspicion for HCC. HCC: hepatocellular carcinoma; LI-RADS: Liver Imaging Reporting and Data System

The category of LR-TIV should be used for the evidence of vascular invasion of the portal veins or hepatic veins. Unequivocal vascular invasion is present when enhancing soft tissue is present within the vessel [Figure 8]. This category does not require the presence of a parenchymal mass. If possible, the radiologist should indicate the most probably etiology between HCC and non-HCC malignancy. 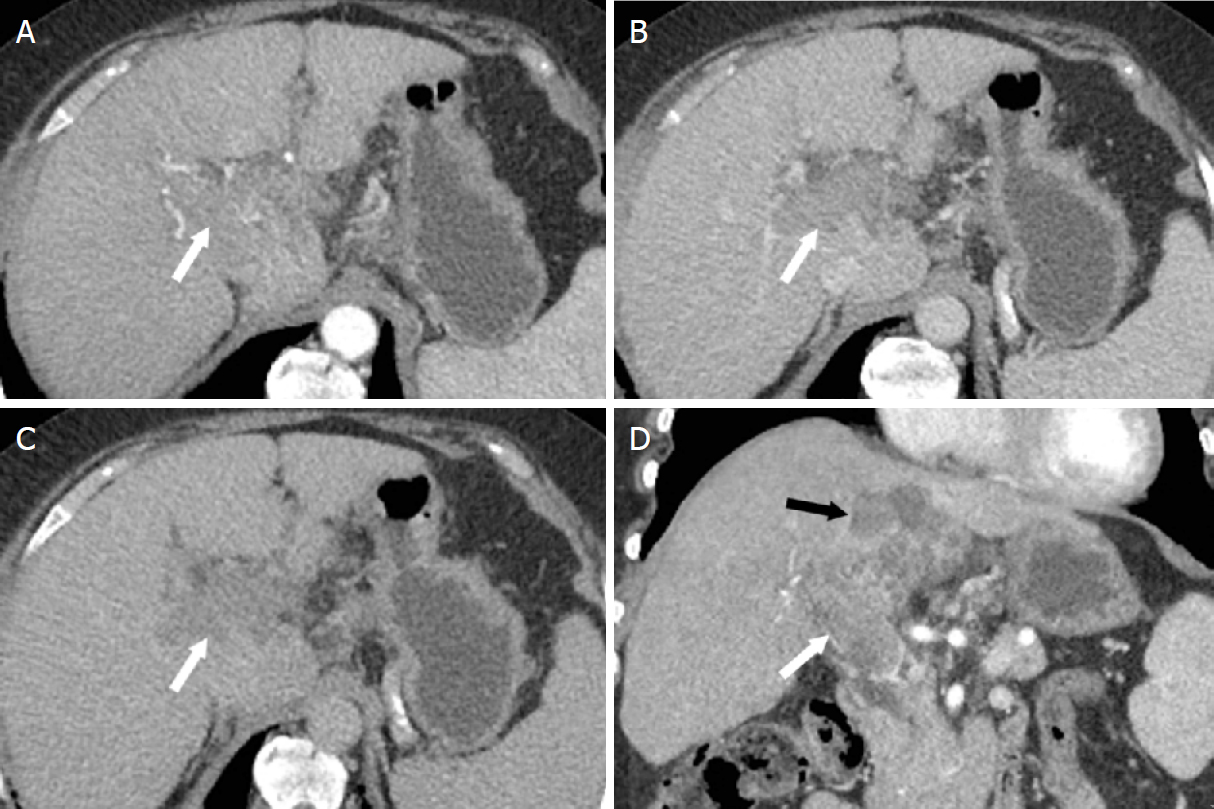 Since its initial release in 2011, CT/MR LI-RADS has evolved based on user feedback, ongoing expert review, and the need for unification with other HCC imaging algorithms. CT/MR LI-RADS v2018 provides an algorithm for the standardized reporting and interpretation of findings in patients at risk for HCC, and is now concordant with AASLD practice guidelines. With increasing adoption worldwide, the CT/MR algorithm and associated lexicon enable clearer communication between radiologists, other physicians, and researchers to better provide care for patients at risk for developing HCC. 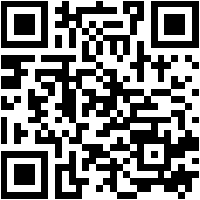