1Department of Pediatric Hepatology and Gastroenterology, , .

Mutations in MPV17 lead to severe mitochondrial DNA depletion syndrome (MTDPS). All known p.R50W variants in MPV17 are lethal. The homozygous variant p.R50Q in MPV17 among patients with Navajo neurohepatopathy is known to allow longer survival, although heterozygous variants p.R50Q have not been reported. This is the first clinical report in compound heterozygosity MPV17 mutation (p.R50W/p.R50Q). Three siblings were admitted due to multiple hepatic nodules; none presented neurological abnormalities. However, they suffered from severe hypoglycemia and cyclic vomiting. The diagnosis of MPV17-related MTDPS was confirmed by detection of a compound heterozygous MPV17 mutation (p.R50W/p.R50Q), and striking reduction of hepatic mitochondrial DNA. One patient developed pediatric-onset of hepatocellular carcinoma. Notably, all patients survived for extended periods, including two patients who received liver transplantation, which contrasted the high mortality rate associated with p.R50W mutations, as previously reported. The p.R50Q mutation might be associated with longer survival and improved liver transplantation outcomes.

The causes of mitochondrial disorders are defects in mitochondrial DNA (mtDNA) or in nuclear genes that affect mtDNA biogenesis and maintenance. Defects in nuclear genes can result in the accumulation of mtDNA deletions, or with mtDNA depletion syndrome (MTDPS)[1-3]. The latter is an autosomal recessive disease associated with decreased mtDNA copy number in clinically affected tissues[4-6]. The disease has three known phenotypes: hepatocerebral, myopathic, and encephalomyopathy. Hepatocerebral MTDPS is linked to pathogenic variants in DNA polymerase gamma[7], Twinkle (PEO1)[8], deoxyguanosine kinase[9], and mtDNA maintenance protein MPV17[4].

MPV17-related MTDPS is a very rare disease. To date, MPV17-related hepatocerebral MTDPS has been reported in 96 patients[4,5,10-30]. Disease prognosis is severe, given that ~80% of patients die from liver failure during early childhood[30]. Hepatic cirrhosis has been diagnosed in 20 patients, while three patients had hepatocellular carcinoma (HCC)[10,15,25]. Neurological manifestations were also reported in 91% of patients with developmental delays, and 74% of patients with generalized hypotonia. These patients also experienced MR imaging (MRI) abnormalities; metabolic manifestations, including hypoglycemia and lactic acidosis; failure to thrive; feeding difficulties; and retinaltubulopathy.

Currently, 48 pathogenic variants of MPV17 are known, occurring exclusively in a few families. Five cases with p.R50W mutations (three homozygous and two heterozygous) died of liver failure during early childhood[4,12,25,30]. Previous case studies identified homozygous variant p.R50Q in MPV17 among patients with Navajo neurohepatopathy (NNH)[10,15,29]. One specific homozygous mutation, p.R50Q, has been reported in several Navajo individuals from the southwestern United States and is the cause of NNH. This condition clinically manifests as severe sensory and motor neuropathy, corneal anesthesia, ulcers, cerebral leukoencephalopathy, failure to thrive, and metabolic acidosis. To date, compound heterozygous variant p.R50Q with other mutations has not been reported in MPV17-related MTDPS.

In this case report, we describe for the first time three patients with MTDPS who possessed the compound heterozygous MPV17 variant p.R50Q/p.R50W. Unlike deceased outcomes of p.R50W variants as previously reported, our three cases with p.R50Q/R50W mutations survived without signs of typical neurological manifestations.

The proband was a 6-year-old male (Case 1) and the first child of healthy, nonconsanguineous parents with no hereditary history of the disease (for family pedigree, see Figure 1A). The child was delivered via caesarian section after a dinochorionic and diamniotic pregnancy. Case 2 was the first girl of a twin of Case 1. A second girl (Case 3) was born three years after Cases 1 and 2, delivered without any complication. Cases 1-3 showed similar clinical manifestation: all patients suffered from severe hypoglycemia and cyclic vomiting. During infancy, Cases 1 and 3 presented with liver failure; although there was a mild spontaneous remission, acute liver failure was repeated through episodes of febrile infection. Case 2 presented with liver dysfunction only.

In Case 1, the patient developed recurrent vomiting with hypoglycemia at the age of six, and abdominal ultrasound found multiple liver masses. Each patient was admitted to our hospital due to multiple hepatic nodules, detected by abdominal ultrasound at age six in Case 2, and at age three in Case 3 [Figure 2A].

Table 1 shows the clinical findings of three patients at first admission to our hospital. Case 2 and 3 showed no manifestations of neurological abnormality, but Case 1 exhibited mild intellectual disability (IQ 68). Serological tests for viral hepatitis A, B, and C, cytomegalovirus, and Epstein-Barr virus excluded the presence of these infections. Wilson’s disease was excluded by measuring ceruloplasmin, serum copper, and urinary copper.

Liver biopsies revealed advanced fibrosis with regenerative nodules and mild steatosis in Cases 1 and 2 [Figure 3A]. In Case 3, liver biopsy was avoided due to hemorrhagic tendency. Electron microscopy revealed that these two children had giant mitochondria with increased inclusion-body count in hepatocytes [Figure 3B].

After obtaining approval from the institutional review board of Saiseikai Yokohama-shi Tobu Hospital and informed consent from parents, biochemical examination and molecular studies were performed.

DNA was extracted from peripheral blood samples of the three patients and their parents. A whole-exome analysis using Hiseq 2500 (Illumina, Sana Clara, USA) identified compound heterozygous missense mutations with NM_002437.4:c.148C>T (p.R50W) and c.149G>A (p.R50Q) in MPV17, respectively, inherited from each of their parents [Figure 1B]. Sanger sequencing confirmed these results.

Patients were given ubiquinone carnitine as medication for mitochondrial rescue supplementation. A lipid-rich diet efficiently controlled hypoglycemia and normalized liver function for a previous case study[14]. However, a lipid-rich, carbohydrate-poor diet (lipid 45%, carbohydrate 45%, and protein 10%) caused severe hypoglycemia with vomiting symptoms in Cases 1-3. Episodic hypoglycemia and vomiting were dramatically reduced with the avoidance of fasting and uncooked cornstarch, along with the provision of a carbohydrate-rich diet with medium-chain triglyceride powder (lipid 30%, carbohydrate 60%, and protein 10%) six times per day.

Six months later, Case 2 was readmitted to our hospital because of an increasing mass measuring 2.9 cm located in segment 7, as revealed by abdominal ultrasound imaging. It showed no evidence of vascular invasion or metastasis. EOB-enhanced MR images revealed early arterial enhancement, as well as washed-out portal-venous and liver-cell-enhance phases [Figure 2B]. We diagnosed HCC. At age 7, Case 2 underwent living-donor-liver transplantation from her father. The resected liver was completely cirrhotic, and histology indicated well-differentiated HCC [Figure 4]. After liver transplantation, Case 2 did not experience post-transplant complications. Case 1 also developed end-stage liver disease and obtained a liver transplant from his grandfather five months after Case 2’s operation. Case 1’s resected liver was also completely cirrhotic but without neoplasm stigma. As with Case 2, Case 1 did not experience post-surgery complications. We also observed Case 3 to detect any increases in hepatic masses. At the time of writing, all three patients exhibited normal cognition and neurological function. 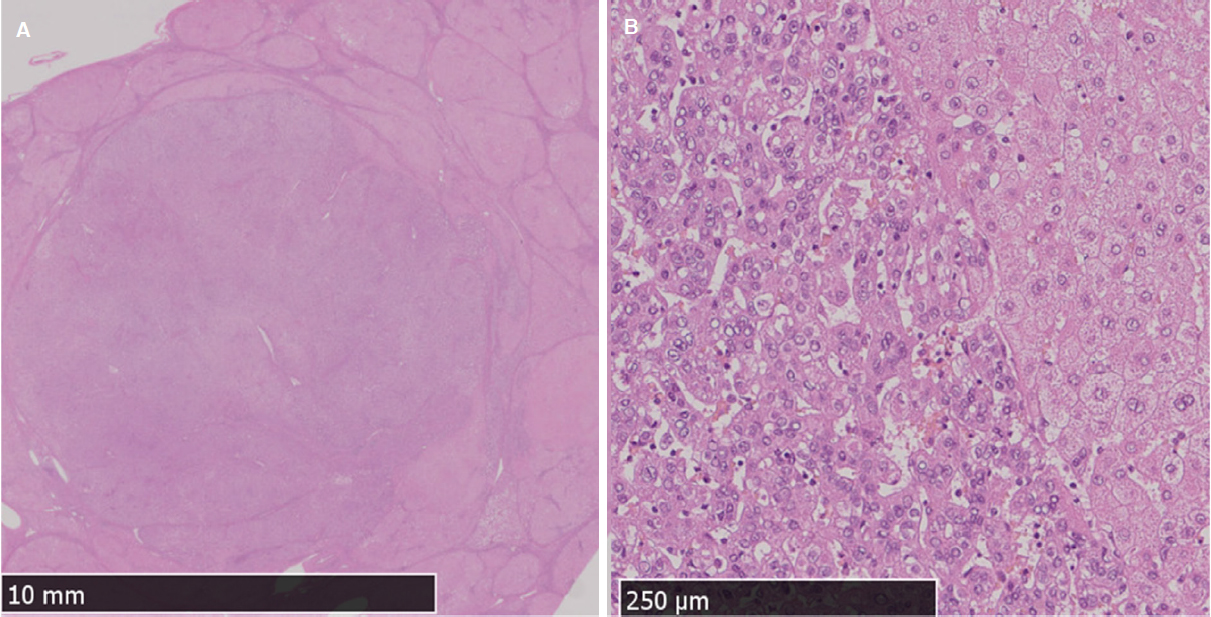 This is the first clinical report in compound heterozygous mutation (p.R50Q/p.R50W) of MPV17, and three cases were diagnosed with hepatocerebral MTDPS. In contrast with deceased outcomes of p.R50W variants previously reported, our three cases with p.R50Q/R50W mutations survived for a more extended period without neurological manifestations. One case developed HCC. Two of our cases underwent liver transplantation, and both showed positive post-transplant outcomes at the time of writing.

Interestingly, one of our cases developed pediatric-onset HCC, increasing the number to four known patients with MPV17-related MTDPS who had this cancer [Table 3]. Out of four patients with HCC in MPV17-related MTDPS, no compound heterozygous mutation was reported. In contrast, two patients had homozygous mutations (another patient was not identified in one MPV17 mutation). Regarding treatment, all four patients with HCC had liver transplantation (LT), although post-LT course differed widely according to the types of genotypes. p.R50W homozygous patients died at 10 years old, one year after she had liver transplantation, while three patients showed extended survival with good-post-LT course.

As with previous studies of MTDPS, this case report describes a small sample size and short follow-up period. Therefore, we need to perform further studies on large patient cohorts, to determine the effectiveness and outcomes of liver transplantation in MPV17-related MTDPS. Long-term follow up should be performed, including regular neurological assessment.

This case study reported the first compound heterozygous p.R50Q/p.R50W mutation of MPV17. All the three siblings survived without neurological manifestations, in contrast with total mortality accompanied by systemic organ involvements in previous MPV17 mutation p.R50W. Two of our cases underwent liver transplantation, and both showed positive post-transplant outcomes at the time of writing. The p.R50Q mutation might be associated with more prolonged survival including liver transplantation outcomes, as compared with other previously described mutations linked to severe outcomes of MPV17-related MTDPS. Screens of the MPV17 gene should be performed in all cases of unknown, severe hepatic dysfunction in children.

Made a special support from the metabolic evaluation: Murayama K, Shimura M

The institutional review board of Saiseikai Yokohama-shi Tobu Hospital approved, and informed consent was obtained from parent.

Written informed consent was obtained from the guardian of the patients for publication of this Case report and any accompanying images. A copy of the written consent is available for review by the Editor of this journal. 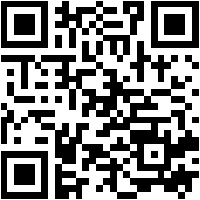