Chronic hepatitis C virus (HCV) infection is a major cause of liver cirrhosis and hepatocellular carcinoma (HCC) worldwide. The recent advancement of direct-acting Antiviral Agents (DAAs) in hepatitis C therapy, resulted in sustained virological response rates of over 90% in treated patients in different stages of liver fibrosis. The efficacy of DAAs treatment has also been confirmed in real-life cohorts that include subjects with decompensated cirrhosis and therefore seems a promising step to a significant reduction in the recurrence of HCC in patients who achieved complete destruction of the HCC nodules by local therapy. We present a 72-year old patient with HCV-related liver cirrhosis who successfully responded to DAAs treatment after complete destruction of an early HCC nodule.

The clinical implementation of direct-acting Antiviral Agents (DAAs) therapy allowed achieving over 90% sustained virological response (SVR) rate in treated patients with chronic hepatitis C virus (HCV) infection regardless of the presence of liver cirrhosis[1-3]. The efficacy of DAAs treatment has also been confirmed in real-life cohorts that include subjects with decompensated cirrhosis and therefore seems a promising step to a significant reduction in the recurrence of hepatocellular carcinoma (HCC) in patients who achieved complete destruction of the HCC nodules by local therapy[4-6].

An unexpectedly high recurrence rate of HCC after DDAs therapy was reported by the initial studies[7,8], however not confirmed later on[9,10]. Given the ambivalent results, any data regarding long-term DDAs therapy in the referred patient cohort are of particular interest.

A 72-year old female patient with chronic hepatitis C infection and related liver cirrhosis was successfully treated with DDAs following complete destruction of HCC nodule. The patient in question has been followed-up:

The patient presented with chronic hepatitis C infection (genotype Ib), positive anti-HBc total antibodies, but neither positive hepatitis B surface antigen nor detectable HBV DNA and anti-HIV. No history of alcohol and drug abuse was present. She had a compensated type - II diabetes mellitus and moderate arterial hypertension.

Liver cirrhosis has been diagnosed during cholecystectomy in 2001. At that time there were no complications due to portal hypertension. The patient was declared as a primary non-responder after IFN/RBV administration in 2002, therefore received supportive treatment in the following 13 years. In that period the chronic liver disease remained compensated. The viral load remained low (HCV RNA < 800,000 IU/mL), with normal or slightly elevated ALT < 2× upper limit of normal.

HCC during HCV, before DAAs treatment

In December 2013 transarterial chemoembolization (TACE) was performed. However residual follow-up CT scan showed residual nodule in the third hepatic segment [Figure 1]. Therefore there sessions of radiofrequency ablation (RFA) were performed in 2014 and early 2015. CT-scan demonstrated complete ablation of the lesion after the last session, with a zone of ablation-induced necrosis 36 mm × 47 mm in size [Figures 2 and 3]. 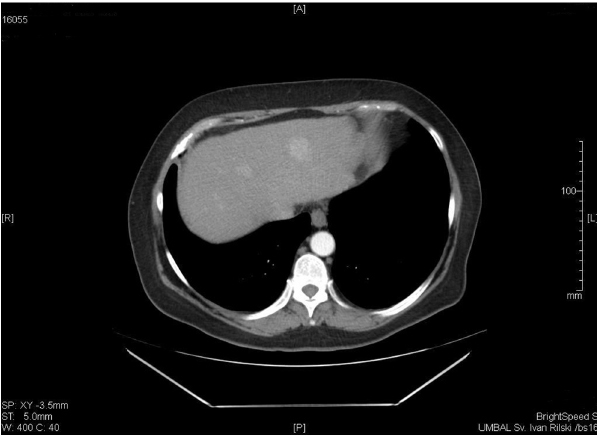 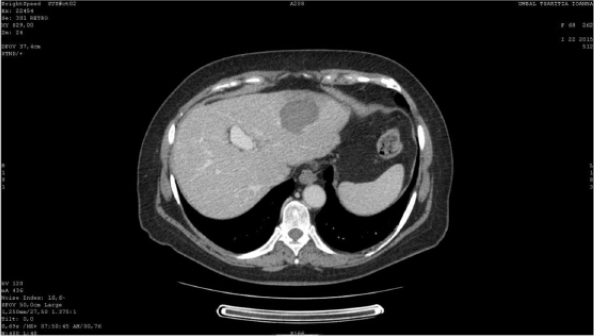 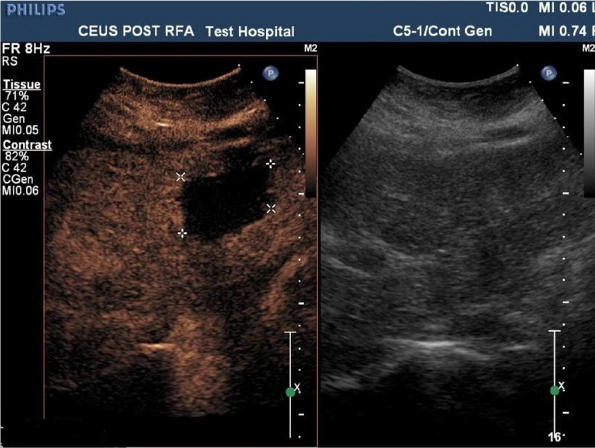 January 2015 DDAs therapy 12-week regimen with Ombitasvir, Paritaprevir/Ritonavir, Dasabuvir and Ribavirin was initiated. At week 2 HCV RNA levels became undetectable, remained so until the end of the therapy, as well as at week 12 and 24. Complete normalization of aminotransferases was observed. Transitory anemia, fatigue, jaundice due to direct hyperbilirubinemia were observed during the therapeutic period. No signs of decompensation of the chronic liver disease were present[11].

No signs of HCC recurrence were observed within the 24-week post treatment follow-up. A decrease in the alfa-fetoprotein levels (77 UI/mL to 4 UI/mL) was observed by week 12 (April, 2015), remained so in the following months (July-October 2015). Contrast-enhanced ultrasound showed reduction in the size of the zone of interest to 26 mm (September, 2015).

February 2018, 37 months after RFA and 34 months after SVR12, the patient was admitted for clinical follow-up. Using contrast enhanced ultrasound and contrast-enhanced computed tomography (CT)-scan a recurrent HCC nodule, 25 mm × 20 mm in size, was detected in the same liver segment. The chronic liver disease was compensated, but with signs of progression of the portal hypertension with grade 3 gastroesophageal varices. Serum HCV RNA and HBV DNA were undetectable.

In March, 2018 microwave ablation and percutaneous ethanol injection were performed in the detected vital HCC nodule. Following CT-scan confirmed absence of vital tissue in the malignant nodule, with axial dimensions of the ablated zone 56 mm × 49 mm.

One year later, due to progression Sorafenib therapy was initiated.

The initial data that indicated increased risks of HCC recurrence after DAAs therapy have not been confirmed by subsequent studies, but the discussed problem is still a matter of debate[12]. In our case report, the late HCC recurrence is more likely to be a result of the evolution of long-lasting liver cirrhosis, rather than to the performed DAAs treatment. The discussed subject was with history of cirrhosis for more than 18 years and HCC initially occurred prior to DAAs therapy. Although, HCC was diagnosed in early stage (BCLC-A) complete destruction prior DAAs therapy was achieved by multiple sessions of local therapy (TACE and RFAs). Patients who underwent more than one HCC treatment had a higher recurrence rate than those treated only once[12-15].

In another case, series of cirrhosis associated with HCV done in Bulgaria, more advanced HCCs were successfully treated with percutaneous thermal ablation (n = 17) or resection (n = 1). Subsequently, all patients were treated with DAA for HCV infection. HCC recidivism (local or distal intrahepatic) was observed in 13 patients (72%) (18, personal communication). Of particular importance is that subject was anti-HBc positive. Anti-HBc has also been shown to be prognostic factor in HCC recurrence and recurrence free survival after curative resection[16,17]. On the other hand, HCC recurrence was detected relatively late - 37 months post initial complete destruction of HCC.

The natural history of viral liver cirrhosis includes HCC development. Suppression of viral replication reduces the rate of HCC occurrence. The local therapy is successful in the early stage of HCC, but did not eliminate the risk of HCC recurrence. The new DAA therapy is very short. Some communications reported an unexpectedly high rate of HCC reoccurrence after DAA therapy, but this was not confirmed by further studies. In our case the delayed HCC recurrence might be associated not only with HCV eradication but long term disease and past HBV.

All authors declared that there no conflicts of interest. 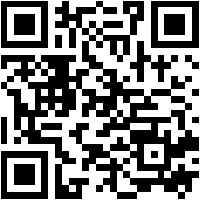