Re-irradiation (Re-RT) in liver tumours is rarely reported owing to poor tolerance of liver and high incidence of radiation induced liver disease incidence. Fiducial based robotic radiosurgery allows to deliver high dose radiation to the liver tumour and restricts the dose to healthy uninvolved liver, thereby increasing the potential for Re-RT. Tolerance to radiation is low for entire liver and hence re-radiation is a challenge. On the other hand, as regenerative potential of hepatocytes is rapid, replacement of necrotic liver tissue occurs with regenerated hepatocytes. These regenerated hepatocytes are radiation naïve, do not have “memory” of radation therapy treatment and hence have potential of Re-RT. We are reporting a series of two breast cancer patients presented with liver oligometastasis treated with fiducial based CyberKnife system (CK). Both the patients were treated multiple times with CK and had long-term survival (> 2 years) without any clinical features of radiation induced liver injury. Appropriately selected patients are suitable for multiple sessions of CK for liver lesions with long-term outcome.

Liver tissue has poor tolerance to radiation therapy (RT), hence RT was rarely considered for liver tumours. Mean liver dose as low as 15 Gy to the whole liver can cause injury to the liver [radiation induced liver disease (RILD)], presenting with anicteric hepatitis, ascites and progressive deterioration of liver function[1,2]. Only after high precision RT was introduced and clinicians had knowledge regarding partial liver radiation, RT gained momentum in the treatment of liver tumours. Stereotactic radiation therapy with real time liver tracking have helped in delivering safely high dose precise short course RT (radiosurgery) in liver tumours. However, the risk of liver injury is always a concern in treatment of liver tumours. In such a situation it is likely that re-irradiation (Re-RT) in liver tumours will be rarely reported.

Fiducial based robotic radiosurgery (CyberKnife, CK, Accuray®; Sunnyvale, CA) gives liberty to deliver high dose radiation to liver tumours and restrict dose to surrounding healthy liver cells, thereby increasing the potential for Re-RT[3,4]. Re-RT in liver tumours is a challenge, and needs active evaluation of possible toxicities before initiating the treatment. There are higher risks of liver decompensation and incidence of RILD. Toxicity and response to treatment after stereotactic body radiotherapy (SBRT) depends upon mean liver dose, amount of spared normal liver volume, previous treatment and modality of treatment[5]. On the other hand, regenerative potential of hepatocytes is rapid and rapidly proliferating hepatocytes replacement of necrotic liver tissue, those expected to have no “memory” of RT as they are naïve to radiation[2]. Hence, there is a potential for Re-RT in liver with rapid regeneration of hepatocytes[2]. We are reporting a series of two breast cancer patients presented with liver oligometastasis and are treated with fiducial based CyberKnife system (CK). 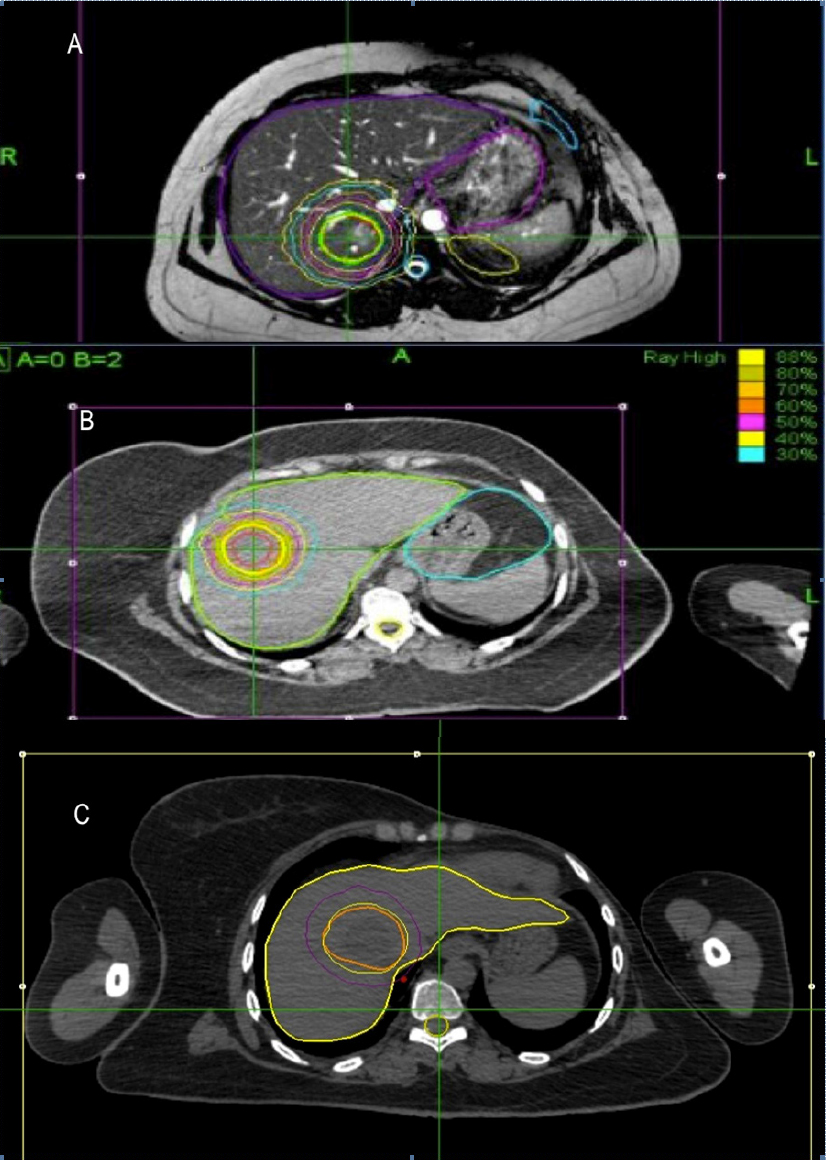 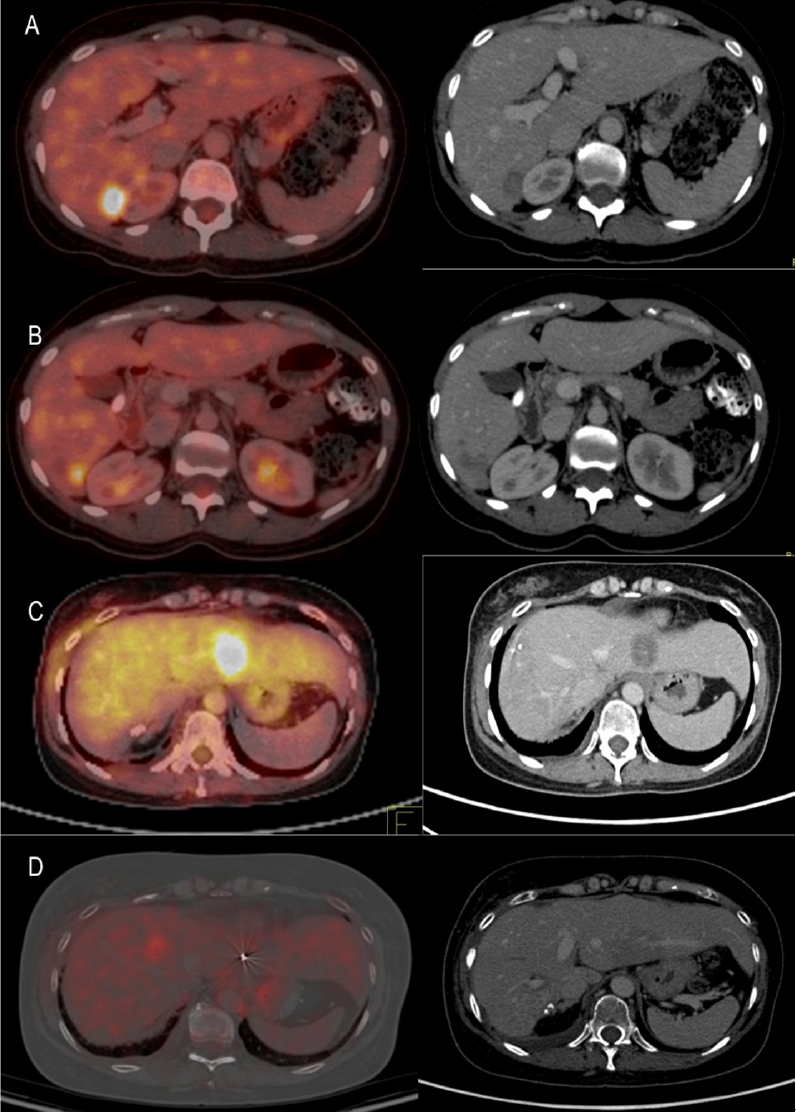 A thirty-six year-old female was diagnosed with carcinoma right breast (cT1N1M0, IDC Gr III, ER/PR +ve, Her2neu -ve) in Nov 2010, was treated with breast conservative surgery (BCS). She received adjuvant systemic therapy (FEC × 4 and Docetaxel × 4 cycle), followed by adjuvant loco-regional RT (45 Gy/25 fr/5 wk) [Table 2]. She was on periodic follow-up and had controlled disease until Feb 2014 when routine PET scan showed multiple liver lesions in both lobes, largest measuring 7 cm × 8 cm in Seg VI/VII suggestive of metastasis. There was no other focus of distant metastasis in any other organs. Biopsy from liver lesion was IDC Gr III, ER/PR +ve, Her2neu -ve. She received multiple lines of systemic therapy (Abraxane, Gemcitabine/Carboplatin, capecitabine, HT), but had partial response to treatment. PET-CT (Feb 2016) revealed multiple small lesions in liver with significant metabolic activity in two residual lesions in segment VI (2 × 1.5 SUVmax -5) and VII (2 cm × 2 cm, SUVmax -8). In March 2016, she was treated with CK (45 Gy/3 fr to both lesions, 86% isodose). Then she was on immunotherapy with Ipilimumab (PDL1 antagonist). Follow-up PET scan (June 2016) revealed complete metabolic and anatomic resolution of previous liver lesions as well. PET scan in Oct 2016 showed a new solitary lesion in segment II of liver (2.3 cm × 2.5 cm, SUVmax -8.0) and re-treated with CK (45 Gy/3 fr, 87% isodose) [Figure 3]. PET scan (March 2017) showed resolution of liver lesions with signs of regeneration/ hypertrophy of the irradiated liver segments. Patient was evaluated with USG abdomen, liver function test for any signs of RILD and no signs of RILD was found on evaluation. Target (GTV) was contoured on contrast CT scan and MRI scan (T1 contrast and T2 flair) images. Usual PTV margin of 3 mm given. In re-radiation, where the new lesion is away (> 5 cm) from the fiducials, 5mm PTV margin was given for setup uncertainties. Overlapping of previous dose distribution was evaluated. No “hot spot” (more than prescribed dose) outside the target volume was seen. Follow-up PET scan (Oct 2017) showed extensive metastasis in other organs. She was on metronomic chemotherapy and expired with progressive disease on June 2018.

Re-radiation in liver tumours are not common in clinical practice. There are only few published literatures in this aspect and no standard consensus regarding dosage schedule[6-8]. In most of the subsites, such as in head and neck cancer or cervical cancer, in re-irridiation setting there is usually reduction of total dose (BED)[9]. Treatment volume is limited and fractionation schedule modified depending upon “time to re-treat”. Irridiated volume is also important in selection of fractionation schedule[8]. Usually, in head and neck cancer “seven” year time is considered “safe” to re-challenge with full dose of RT. In case of re-radiation before that period, there is a reduction of dose depending upon the “time to re-treat”. Usually 15% dose “decay” considered in 1st year after RT and then every year 10% “decay” in dose. As the time gap between primary RT and re-irridiation is increasing, it’s safer to deliver higher (adequate) dose of RT to the target[9]. This standard practice is not applied in re-radiation of liver tumours. In fact, in few studies there are better results (OS) in patients treated with higher dose in re-radiation setting. Child Pugh Score and “time to re-treat” are considered significant prognostic factors[6]. There is no compromise in irridiated volume as well[6]. Tolerance of liver is low, but fortunately in re-radiation setting, liver tolerates radiation comparatively better than other subsites[2,5]. High dose RT work like thrombo-embolism, embolizing blood supply to a portion of liver and stimulating proliferating of hepatocytcyes from adjacent normal liver[7]. Proliferating hepatocytes cause hypertrophy of the liver portion which is naiive to RT[7]. This proliferating hepatocytes replace the post-CK necrotic liver. Hence, the “new” regenerated portion of liver tolerate better than previously treated liver. Different cytokines liberated from the necrosed liver tissue may also stimulate hypertrophy of liver. It is assumed that the new hepatocytes are naïve to RT and will tolerate radiation better. However, there is no prospective study neither any laboratory model to establish this notion.

After RT, there is fibrosis as well, and this fibosis may lead to shrinkage of liver volume. Post-CK, there is 50% regression of the involved liver due to radiation injury, on the other hand there is 320% compensatory hypertrophy of the contralateral liver lobe[2]. This phenomenon negates the implications of firbosis, and hypertrophy has more predominent impact. Shrinkage of liver volume is expected to be more with higher integral dose of RT. In few studies, there is transient reduction of liver volume of about 20% at 3 months post-CK. However, at one year follow up there is only 10% shrinkage compared to pre-treatment volume. Even after repeating CK, liver volume is mostly maintained due to compensatory hypertrophy.

Most severe complication after re-radiation is RILD[7,8]. It is a syndrome of ascites, elevated transaminase level, and anicteric hepatomegaly. Usually occurs in a proportion of patient after receiving whole liver doses of > 30-35 Gy[8].

However, retrospective series of partial liver radiation have demonstrated that liver tolerance not only depends upon the total dose of RT, but also on pre-treatment Child-Pugh score, viral load and volume of tumour as well[8]. Partial liver may be safely treated with radiation if adequate liver volume is preserved[3]. In re-radiation, as the hypertrophied liver is mostly radiation naiive, re-radiation is possible with adequate dose in small volume recurrences.

In this present case series, breast cancer patients with liver metastasis were treated with radiosurgery for multiple times in recurrent setting. There was a time gap of more than six months between two treatments. There was no clinical sign of “RILD” after re-CK. Radiological evaluation, clinical examination and liver function test done to exclude RILD at all post-CK follow up evaluation. In both the cases, liver volumes were maintained after post-CK long-term follow up (> 2 years). There was regeneration of the treated portion of liver. In the present series, patient was treated three times with CK for liver metastasis. There are few small series of liver metastasis patients treated with SBRT for twice in two different lobes. There is limited or no published literature on SBRT for three times in liver metastasis. In present study is novel in terms of thrice CK treatment for liver metastasis and had complete response to treatment. Modern systemic therapy improves the probability of control of distant metastasis as well as survival[9]. Hence, the probability of repeating focal treatment with RT has increased significantly with usage of modern systemic therapy. Focused RT with Robotic Radiosurgery (CK) has minimal internal target volume and spares maximum liver volume, hence enables to re-treat w ith radiosurgery in small volume recurrent or new lesions in liver. Toxicity was assessed by liver function test parameters, ascitis and clinical symptoms[8]. There was no gross derangement of secretory or excretory functions (serum bilirubin, alkaline phosphatase, SGOT, SGPT) of the liver. There was no ascitis after treatment or at follow up evaluation. Patients were asymptomatic with liver metastasis and were on routine close follow up Usually, after liver metastasis survival outcome is poor, mean overall survival is six to eight months after diagnosis. In this case series, both the patients survived more than 2 years and after CK there is acceptable survival outcome in these patient cohort.

In summary, re-radiation for liver lesions is feasible but uncommon in clinical practice. In the present series, two patients with liver metastasis were treated three times with radiosurgery for metastasis at different segments of liver without any clinical signs of liver decompensation. There were are signs of early regeneration in the irradiated regions of the liver in USG scan. High regeneration capacity and hypertrophy of the irradiated region of liver suggest potential for Re-RT. Re-radiation of liver with CK will be an exciting option in the era of highly potent systemic therapies.

Critical review and finalization of the manuscript: Dutta D 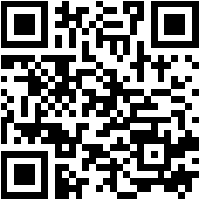