Liver fibrosis is a wound-healing response of liver cells to chronic injuries caused by viral infections, including hepatitis B virus (HBV), hepatitis C virus (HCV), toxins, and alcohol abuse. The ability to stage diseases for treatment naïve patients to initiate proper medical procedures and predict the clinical causes of the disease or the treatment response is important given the increased prevalence of liver fibrosis caused by HBV, HCV and fatty liver diseases. CHI3L1 (chitinase-3-like protein 1, also known as YKL-40), which belongs to the chitinase family but lacks chitinolytic activity and is highly expressed in the liver, seems to fulfill this role. CHI3L1 is a non-invasive staging marker for liver fibrosis caused by HBV, HCV and non-alcoholic fatty liver disease as well as a predictor of the clinical causes and fibrotic changes after treatments. CHI3L1 predicts histological progression of liver fibrosis and fibrosis progression rate (fibrosis unit/year), rapid fibrosis progression after liver transplantation and response to interferon and recent direct acting antiviral therapy in chronic HCV patients. CHI3L1 also predicts response to antiviral therapy in chronic HBV patients.

Liver fibrosis is a wound-healing response of liver cells to chronic injuries caused by viral infections, toxins, alcohol abuse and other causes. Liver fibrosis is accompanied by a constant process of destruction and repair of the hepatic parenchyma that is caused by inflammation and often results in serious complications, including portal hypertension and liver failure. Liver fibrosis can also give rise to hepatocellular carcinoma. Liver fibrosis can lead to cirrhosis, which is defined as the end stage of liver fibrosis[1]. In China, hepatitis B is the major cause of inflammation leading to liver fibrosis and cirrhosis[2,3]. Cirrhosis is an important factor in the development of hepatocellular carcinoma (HCC) because the cumulative 5-year risk of developing HCC in patients with cirrhosis ranges from 5% to 30%, depending on several factors, including the presence and stage of underlying liver disease, ethnicity, age, sex and the duration of exposure to primary hepatotropic viruses. To reduce the burden of the end stage liver diseases (cirrhosis and HCC), it is critical to identify liver fibrosis at its early stage, predict the direction and speed of the progression, and finally to monitor and predict the treatments responses (antiviral or anti-fibrotic treatments).

Although many biomarkers (e.g., APRI, FIB4, fibrometer, fibrotest, etc.) and imaging methods (e.g., Fibroscan, ARFI, MRE) have been widely proposed for staging liver fibrosis, their abilities in predicting liver fibrosis progression are very limited. Given that fibrosis is a very slow process, it often takes years to progress or recede from one pathological stage to the next. Therefore, a biomarker that can fulfill this role is most desirable. A search for such a biomarker would require an understanding of the mechanism of liver fibrosis and the key molecules involved in the process.

CHI3L1 (also known as YKL-40) belongs to the chitinase family but lacks chitinolytic activity, which is highly enriched in the liver[4]. CHI3L1 acts as a growth factor for fibroblasts and is involved in matrix remodeling[5]. Serum CHI3L1 levels are associated with the severity of liver fibrosis caused by non-alcoholic fatty liver disease[6], schistosomiasis[7,8], hepatitis C virus (HCV)[9,10] and hepatitis B virus (HBV)[11].

Fontana et al.[12] analyzed the association of serum fibrosis marker levels with the risk of clinical and histological disease progression in a large cohort of patients with chronic hepatitis C consisting of 462 prior non-responders to peg-interferon and ribavirin enrolled in the randomized phase of the Hepatitis C Antiviral Long-term Treatment against Cirrhosis (HALT-C) trial. They performed pretreatment liver biopsy and follow-up biopsies at years 2 and 4 and defined histological progression as a ≥ 2-point increase in the Ishak fibrosis score in patients without cirrhosis. Clinical outcomes included development of decompensation, hepatocellular cancer, death or an increase in the Child-Turcotte-Pugh score to ≥ 7. They collected and compared serial YKL-40 levels in patients who progressed clinically to the levels in patients who did not progress using random effects modeling. YKL-40 levels increased in both groups of patients over time (P = 0.0026) and were significantly increased in the progressors (P < 0.0001).

Saitou et al.[10] analyzed noninvasive markers as predictors of interferon responses with HCV-associated diseases. A total of 109 patients with HCV-associated liver disease were enrolled, and 88 patients underwent liver biopsy. In total, 67 of 109 patients received interferon therapy. YKL-40 was superior to other fibrosis markers for predicting severe fibrosis (F2-F4) from mild fibrosis (F0-F1) (YKL-40, AUC = 0.809; HA, AUC = 0.805). They also evaluated the changes of the levels of fibrosis markers before and after interferon (IFN) therapy. After IFN therapy, only the concentration of serum YKL-40 significantly decreased in the responder group and the non-responder group (P = 0.03). No changes were noted among type IV collagen, amino-terminal peptide of type III procollagen, hyaluronic acid (HA). They concluded that YKL-40 might be a useful non-invasive serum marker to evaluate the efficacy of IFN therapies in patients with HCV-associated liver disease.

Wang et al.[13] compared serum CHI3L1 levels with liver tissue collagen proportionate area (CPA) and liver stiffness measurement (LSM) in a cohort of 131 CHB patients before treatment and after receiving entecavir-based antiviral therapy for 78 weeks. Before treatment, correlation analysis revealed positive correlations between CHI3L1 levels and the CPA (r = 0.351, P < 0.001) and between CHI3L1 and LSM (r = 0.412, P < 0.001). After 78 weeks of treatment, serum CHI3L1 levels decreased compared with baseline (87.8 vs. 69.6 ng/mL, P < 0.001). Furthermore, the changes in CHI3L1 are correlated with changes in CPA (r = 0.366, P < 0.001) and the changes in LSM (r = 0.438, P < 0.001) before and after antiviral treatments. They concluded that CHI3L1 is a useful non-invasive marker for the assessment of liver fibrosis in CHB patients before treatment and a potential useful marker for monitoring the change in liver fibrosis during therapy. More interestingly, in many cases, CHI3L1 concentrations decreased after 78 weeks of antiviral therapies, whereas histological stages based on biopsy did not change. However, upon closer examination of the histological images, they found that many samples exhibited improvement in fibrosis as demonstrated by thinning of the septa and reduction in the numbers of the septa. However, the Ishak histological stage remains the same based on the classification standards (personal communication). 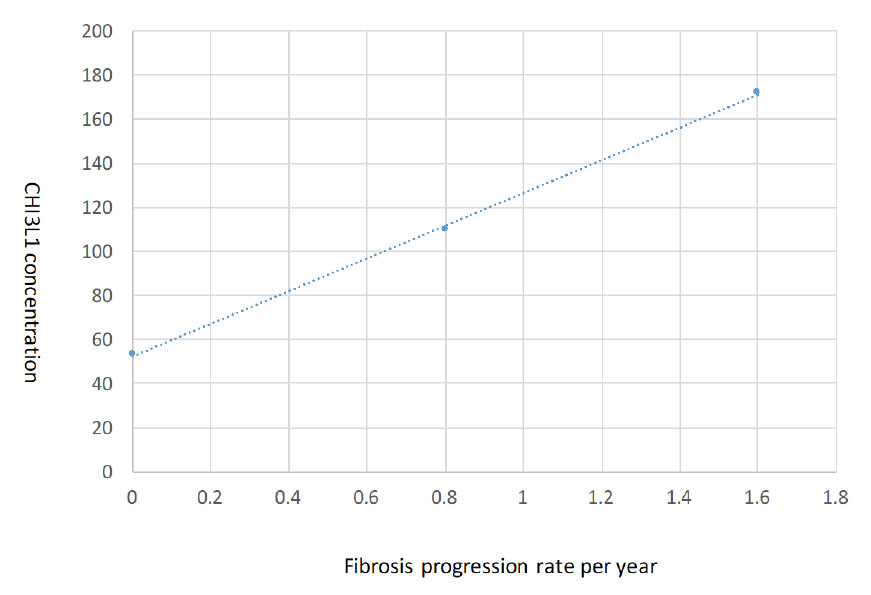 CHI3L1 is not only a staging marker for fibrosis in treatment naïve HBV- or HCV-infected patients and NAFLD patients. CHI3L1 is also predictive of progression or regression of fibrosis. These abilities are likely due to the fact that CHI3L1 is actively involved in the process of liver fibrosis. Johansen et al.[15] used immunohistochemical analysis to demonstrate that CHI3L1 is expressed in areas with fibrosis, particularly leading edges/areas with active fibrogenesis. CHI3L1 staining was not observed in hepatocytes but was expressed in Kupffer cells[6] and potentially hepatic stellate cells (HSC)[15]. He et al.[16] demonstrated that CHI3L1 binds to interleukin-13 receptor α2 (IL-13Rα2), activates MAPK (macrophage mitogen-activated protein kinase), protein kinase B/AKT, and Wnt/β-catenin signaling, and regulates TGF-β1 production via IL-13Rα2-dependent mechanisms. CHI3L1 also promotes HSC activation and proliferation[4]. 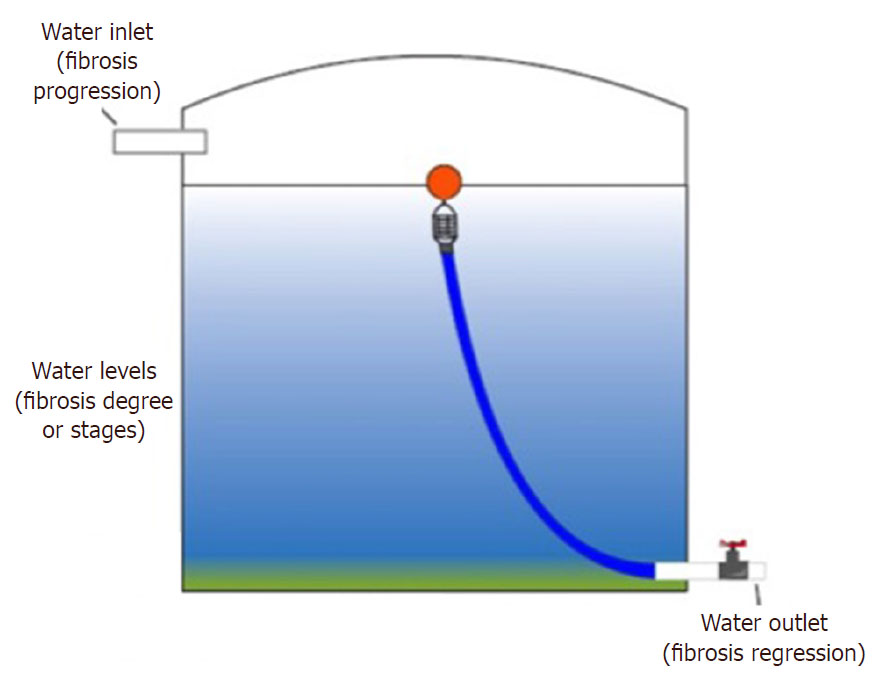 Figure 2. A water tank model to describe the relationship between the progression or regression of liver fibrosis and CHI3L1

Drafted the manuscript: Lin B

The author declares that there are no conflicts of interest.