Aim: The aim was to assess the clinical impact of direct-acting antiviral treatment in patients with compensated hepatitis C virus-related cirrhosis after one year of follow-up.

Methods: An observational retrospective study was conducted on 129 consecutive patients with compensated cirrhosis treated in 2015, analyzing the evolution of liver function and the development of hepatocellular carcinoma and clinical decompensations.

Conclusion: Direct-acting antiviral treatment is not associated in the short term with a decrease in the development of hepatic decompensation or hepatocellular carcinoma compared to what it was reported for untreated compensated cirrhotic patients. There is an improvement in pre and post-treatment platelet counts and albumin levels showing a probable improvement of the hepatic function.

Chronic hepatitis C virus (HCV) infection affects around 160 million people worldwide[1]. Around 16% of patients will develop cirrhosis after 20 years of infection[2], although fibrosis progression can vary due to several factors such as age, alcohol consumption or hepatitis B or human immunodeficiency virus (HIV) co-infection[3]. Once cirrhosis is established, a yearly incidence of hepatocellular carcinoma of 1.4-3.4%[4-6], and a yearly incidence of hepatic decompensation (including episodes of ascites, jaundice, hepatic encephalopathy or variceal bleeding) of 3.9-5.7%[4,6] has been reported.

Before 2011, the best potentially curative treatment option for chronic HCV infection was pegylated interferon in combination with ribavirin. However, sustained virological response rates were reported to be as low as 33% in cirrhotic patients[7], with an significant number of side effects[8]. However, it has been demonstrated that the achievement of a sustained virological response after interferon-based therapy is associated with lower rates of hepatocellular carcinoma and with lower rates of hepatic decompensation[9,10]. A regression of fibrosis after viral eradication has also been reported[11].

The arrival of second-generation direct-acting antivirals improved the sustained virological response rates to more than 90%, even in compensated cirrhotic patients, with fewer side effects[12,13]. However, the achievement of sustained virological response with this treatment does not appear to be associated with a decrease in the occurrence of hepatocellular carcinoma in the short term[14]. It may even be associated with a higher rate of tumor recurrence than what it is expected[15]. A recent prospective multicenter study did not find any evidence of an increased risk of hepatocellular carcinoma recurrence in patients treated with direct-acting antivirals[16]. One report additionally demonstrated an improvement in liver function tests among patients with decompensated liver disease after treatment with oral antiviral therapy[11].

The aim of our study was to assess the clinical impact of direct-acting antiviral treatment in terms of the evolution of liver function and in terms of the development of clinical decompensations and hepatocellular carcinoma in patients with compensated HCV-related cirrhosis after one year of follow-up.

Data from all the patients with compensated HCV-related cirrhosis, without co-existent HIV or hepatitis B infection, who were treated at our center with direct-acting antivirals between January and October 2015, were retrospectively collected. At the end of October 2016, the database included 129 patients. We excluded 39 patients because they did not complete a follow-up of 12 months, which included at least physical examination, hepatic ultrasound, and blood tests every 6 months. Fourteen patients were lost to follow-up during the first year and 25 patients had the last clinic or ultrasound appointment after October 2016.

Follow-up started the first day of treatment, which was defined as time 0. We analyzed: (1) the development of hepatocellular carcinoma. We performed an ultrasound every 6 months and, when it showed a suspicious focal lesion, the diagnosis of hepatocellular carcinoma was completed with a triple-phase computerized tomography scan and/or with a contrast enhanced magnetic resonance imaging; (2) the development of hepatic decompensation, which included jaundice, variceal bleeding, ascites and/or encephalopathy; (3) the evolution of liver function, using Child-Pugh and MELD scores, which were calculated on the first day of treatment and on the last clinic visit, at least one year later. We also performed a brief statistical analysis, using paired t test to compare means of baseline and follow-up platelet counts and bilirubin and albumin levels. A P value below 0.05 was considered statistically significant. The analysis was performed using IBM statistical product and service solutions statistics for Macintosh, version 21.0 (Armonk, NY, IBM Corp).

We analyzed data from 90 consecutive patients with compensated HCV-related cirrhosis who were treated with direct-acting antivirals between January and October 2015 and completed a follow up of at least one year after initiation of therapy.

The median follow-up time after initiation of direct-acting antiviral treatment was 16 months (12-21 months). Seventy-three percent of participants were males, the mean age was 58.1 years and the most frequent genotype was 1b (52.2%). Only 37.8% of patients were naïve, and 11% had liver graft cirrhosis. All patients were Child-Pugh A class at the start of the treatment and the median MELD score was 7 (6-16). At the initiation of therapy, mean bilirubin level was 1.06 ± 0.27 mg/dL, mean platelet count was 117,788 ± 50,546/mm3, and mean albumin level was 4,140 ± 424 mg/dL. The baseline characteristics of the study population are shown in Table 1.

Baseline characteristics of the study population

In terms of treatment, the most frequent combination was sofosbuvir/ledipasvir (35.5%) and 66.7% of patients also received ribavirin. Most participants (78.9%) were treated for 12 weeks. Six patients (6.7%) had relevant adverse effects: 3 patients treated with ribavirin developed moderate anaemia, which improved after lowering the dose; 1 patient referred severe asthenia; 1 patient developed a purpura which required corticosteroids and 1 patient suffered an acute on chronic liver failure which required discontinuation of therapy during the third week of treatment. Eighty-six out of 90 patients (94.6%) achieved SVR12. One patient died during the follow-up due to a metastatic hepatocellular carcinoma. There were no deaths due to unrelated liver causes. 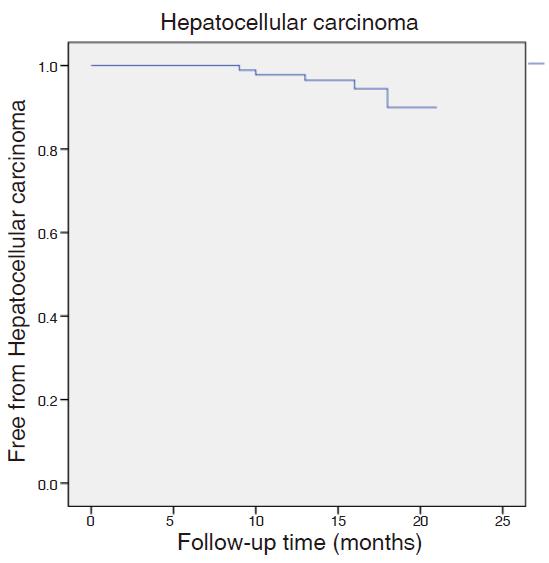 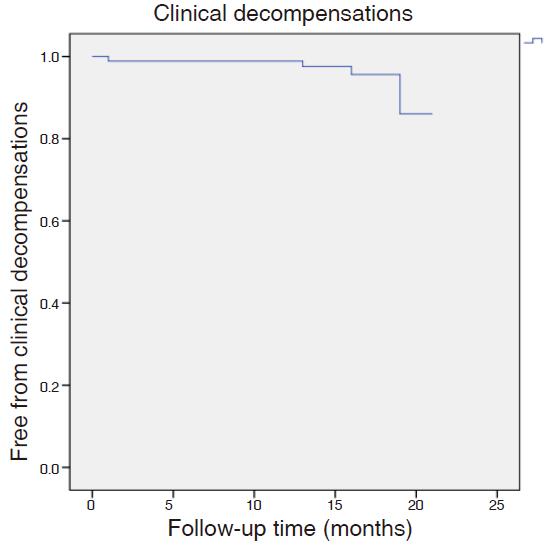 It has been described that patients with advanced chronic liver disease who achieved sustained virological response with interferon-based treatments have a hepatocellular carcinoma annual rate as low as 1% (6), while for untreated patients it is around 3%[5,6]. In terms of hepatic decompensation, it has been described an annual rate of 1.4% for patients treated with interferon, in opposition to a 5.7% for untreated cirrhotic patients[6]. Although it is known that direct-acting antiviral therapy has changed the history of chronic HCV infection, achieving very high cure rates and an excellent safety profile[12], a recent prospective study has shown that the resolution of the infection with this treatment in cirrhotic patients does not seem to reduce the incidence of hepatocellular carcinoma in 24 weeks of follow-up[14]. Also, a recent publication has suggested that there is a higher risk of tumor recurrence in patients with hepatocellular carcinoma treated with direct-acting antivirals[15], while this association was not found in another prospective study[16]. It is important to continue investigating this relationship, developing long-term follow-up studies, in order to clarify the effect that direct-acting antivirals may have on the development of hepatocellular carcinoma and clinical decompensations so that we can better understand and explain to our patients what they can expect after achieving sustained virological response.

In our study, the development of hepatocellular carcinoma in a median of 16 months of follow-up is 3.6%, as high as what it is expected for untreated cirrhotic patients[4,5]. Thus, there seems to be no benefits in the short term in this aspect. Undoubtedly, the study has many limitations as it is retrospective, it was performed in a single center, and it has a relatively small sample size. However, not much data have been published to date and the follow-up period is longer than in previous publications.

It is known that the risk of hepatocellular carcinoma increases in advanced stage of fibrosis, in patients with comorbidities such as diabetes mellitus, and in older age[17,18]. The reason why there are different outcomes in terms of cancer development depending on the treatment received could be explained by the fact that patients with more advanced liver disease and with comorbidities are now being treated with direct acting antivirals, as they were not considered suitable for interferon based therapies before due to the possibility of dangerous side effects. However, in our study the mean age of patients was only 58-year-old, so we cannot justify the high incidence of hepatocellular carcinoma as a result of the old age of patients treated with direct-acting antivirals. On the other hand, it has been described that alpha-interferon can activate natural killer cells, which are part of innate immunity and play a role in the control of viral infections and tumors[19], while interferon-free regimes produce a rapid decrease of HCV RNA levels which is followed by a rapid decrease in natural killer cells activation[20]. This hypothesis could explain the different outcomes between patients receiving one or the other treatment.

In any case, neither direct-acting antivirals nor interferon-based treatments eliminate the risk of hepatocellular carcinoma and patients should continue screening every 6 months after the achievement of sustained virological response.

In terms of clinical decompensation, we also did not see a clinical benefit as our study showed a similar risk than what it is expected for untreated cirrhotic patients[4,6]. In a recent study it has been found that hepatic venous pressure gradient (HVPG) decreaseed after interferon-free treatment in patients with HCV-related cirrhosis, but in patients with a pre-treatment HVPG of 10-15 mmHg, clinically significant portal hypertension was only decreased in 43%[21]. In our study, 4 out of 4 patients who developed clinical decompensation had a previous history of ascitis or were diagnosed with hepatocellular carcinoma during the follow-up, suggesting a more advanced disease. This may explain why no clinical benefit was observed in these patients, and suggests that a longer follow-up period may be needed.

In terms of the hepatic function, our study did not show a significant improvement in the Child-Pugh and MELD scores. This may be because pre-treatment scores were already low. We also had no control group, making it difficult to determine if the outcomes were better or worse than expected. We therefore performed a statistic analysis comparing the mean platelet counts and bilirubin and albumin levels pre- and post-treatment which reflects the hepatic function. We found that there is a statistically significant improvement in platelet counts and in albumin levels showing some benefit in direct-acting antiviral treatment in the short term.

In conclusion, direct-acting antiviral treatment is not associated with a decrease in the development of hepatic decompensations or hepatocellular carcinoma in the first year of follow-up compared to literature reports for untreated compensated cirrhotic patients. On the other hand, there is a statistically significant improvement in platelet counts and in albumin levels, showing a possible improvement of the hepatic function in the short term. More studies are needed to determine the benefits of direct-acting antiviral therapy in the long term.

We thank Dr. Mei-Sze Chua for language polish of this manuscript.

E. Berge, A. Arencibia, E. Otón, L. Cejas and S. Acosta declare that they do not have anything to disclose with respect to this manuscript. F. Pérez: Advisory board for Abbvie, BMS, Gilead, Janssen and MSD.

The data obtained through the medical record review were managed according to the privacy policy and ethics code of our institute.

This was a retrospective study and did not require Institutional Review Board approval.