Post-transplantation malignancies are well known complications after liver transplantation. Certain malignancies are more common in pediatric recipients than adults. Inflammatory myofibroblastic tumors (IMTs) are reactive neoplasms with miniscule malignant potential. IMTs are more common after hematopoietic stem cell transplantation. However, there is 1 case reported in the literature after deceased donor liver transplantation. The authors describe a case of IMT after living donor liver transplantation. The patient was a 1-year-old girl who underwent living donor liver transplantation (LDLT) for decompensated cirrhosis secondary to extra hepatic biliary atresia. Six months post LDLT routine ultrasonography revealed multiple solid abdominal masses. Repeated biopsies were inconclusive. Hence surgical excision was carried out. Histopathological examination revealed IMT. Immunohistochemistry was positive for anaplastic-lymphoma kinase activity. Ceritinib, a tyrosine kinase inhibitor, was used as adjuvant chemotherapy for 1 year. At 1.5 years (at the time of writing this paper) of follow-up, the child was disease free on imaging (whole body positron emission tomography-computed tomography). This will be the first case of IMT after LDLT to be reported in the literature.

Post-transplantation malignancies are well known complication of chronic immunosuppression. Certain malignancies are more common in pediatric recipients than in adults. Literature review revealed that inflammatory myofibroblastic tumors (IMTs) generally occur 3 to 6 months post-transplantation and are more common after hematopoietic stem cell transplantation (HSCT). Epstein-Barr virus has been held responsible in some reported cases. Lungs are the commonest site however they can present anywhere in the body. We describe a case of 6 months old female child who was suffering from end stage liver disease secondary to extra-hepatic biliary atresia (EHBA). She underwent living donor liver transplantation (LDLT). Six months post liver transplantation she was found to have intra-abdominal tumors on routine ultrasonography (USG). She underwent surgical excision of peritoneal neoplasms. Histopathological examination (HPE) confirmed IMT with anaplastic lymphoma kinase activity. She received ceritinibas chemotherapy for 1 year. At 1.5 years of follow-up, the child is recurrence free.

Our patient was a 1-year-old female child from Pakistan. She had decompensated chronic liver disease secondary to EHBA. She underwent primary LDLT at the age of 6 months at our center. Her mother was the donor. She had uneventful post transplantation recovery. At 3 months post liver transplantation (LT), routine USG revealed solid masses in the pelvis and in the sub hepatic region. Trucut biopsy of both the lesions revealed mesenchymal neoplasm. There was no evidence of malignancy. There was gradual increase in size of tumor on follow-up scans over the next 3 months [Figure 1A and B]. She reported back to our center for further evaluation of the intra-abdominal tumors. Review of previous biopsy slides and fresh trucut biopsies done at our center were inconclusive. A tumor board decision was made for surgical excision to get further information about the tumor and also relieve the mass effect in the abdomen. Elective laparotomy was planned. In laparotomy, a 15-cm lesion was seen in right sub diaphragmatic region pushing the hepatic flexure and graft liver which was also adherent to diaphragm [Figure 1C and D]. Another 7-cm firm mass was found adherent to omentum, proximal jejunum and jejunal mesentery. The tumor was removed along with a segment of jejunum. Minimal loculated ascites was also seen near the mass. Two other small tumors of approximately 2 cm each were seen attached to serosa of small bowel. All the macroscopically visible tumors were completely removed. HPE revealed IMT of the peritoneum with very mild malignant potential. Immunohistochemistry (IHC) was positive for anaplastic lymphoma kinase (ALK) antibodies [Figures 2 and 3]. Postoperative period was uneventful. She was discharged in a hemodynamically stable condition on postoperative day 10. After tumor board discussion, ceritinib was given as adjuvant therapy in view of ALK positivity. At 18 months follow-up, patient is recurrence free with good graft function. 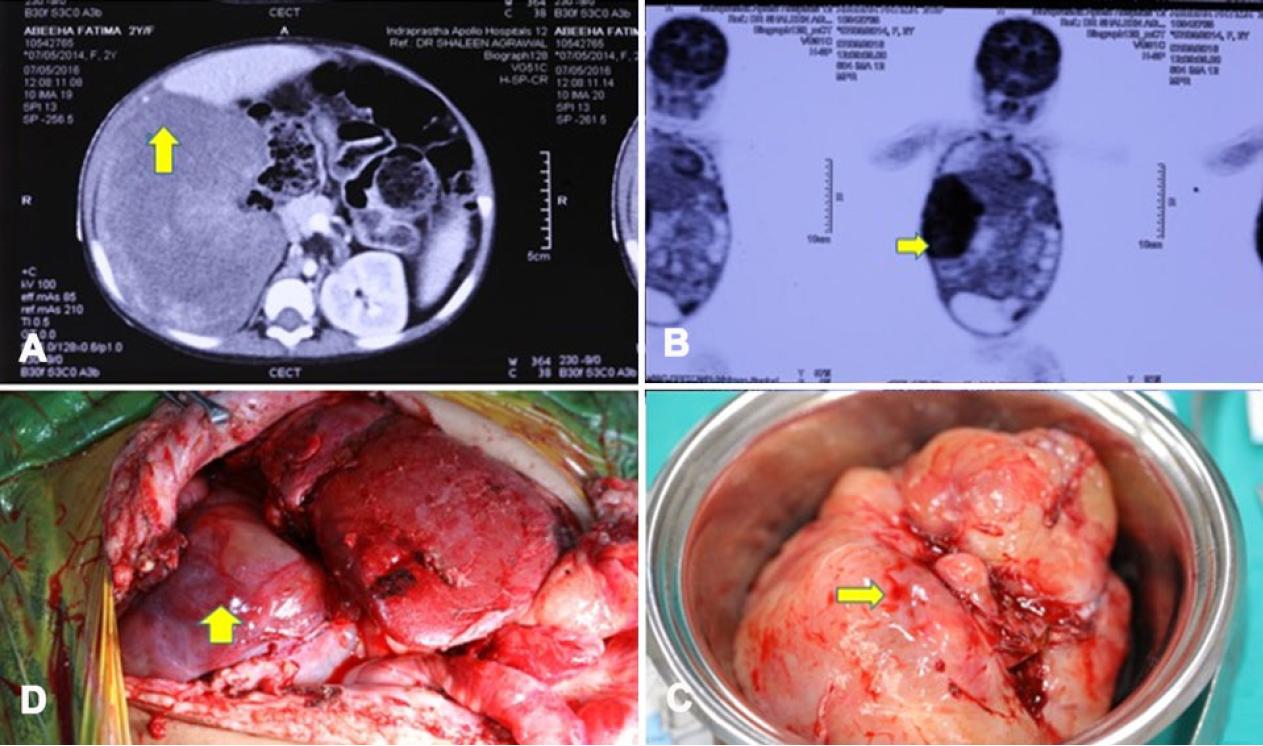 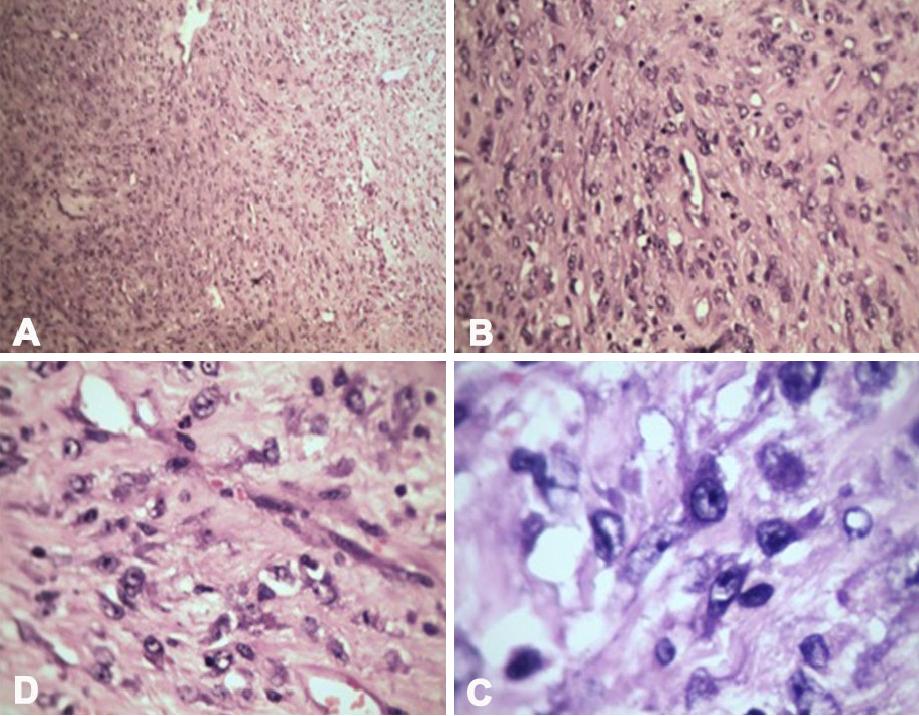 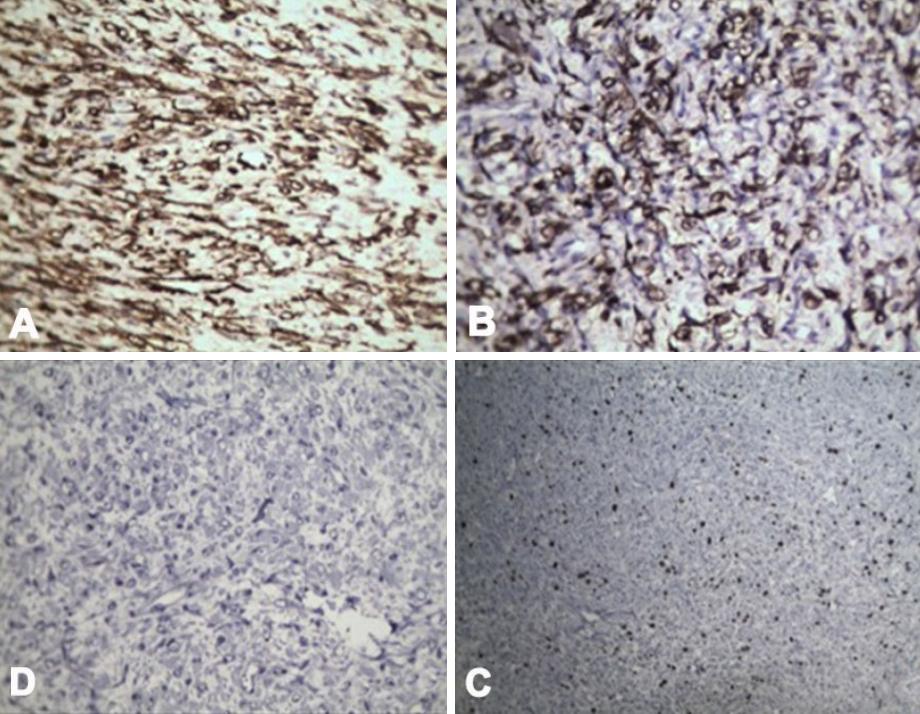 The risk of de novo malignancy following LT is significantly higher than that of the general population. Skin, hematological, and colon cancers are common de novo malignancies after LT. Immunosuppression plays a major role in oncogenesis in the transplant population.[1] Other risk factors are hepatitis C virus infection, smoking, alcoholic cirrhosis, and sun exposure.[2]

IMTs are one of the rare groups of post-transplant malignancies. More than 200 cases have been described so far. Majority of them are after HSCT.[3,4] IMTs occur earlier in the post-transplant period ranging between 3 months and 2.5 years. Presenting complaints of patients are usually fever, weight loss and pain, along with mass related symptoms.[5] Sites of involvement are typically the abdomen, retroperitoneum and pelvis, followed by head, neck, upper respiratory tract, trunk and extremities. Increased morbidity may derive from its site in a vital organ or from aggressive treatment given due to a misdiagnosis of malignancy. Definitive histologic evaluation of the mass must be done to avoid unnecessary treatment-related complications. IMTs may rarely undergo malignant transformation, occasionally with distant metastases. The pathologic feature of IMTs is the proliferation of spindle cells associated with a variably dense polymorphic infiltrate of mononuclear inflammatory cells (e.g. lymphocytes, plasma cells, histiocytes, and occasional eosinophils). Coffin et al.[6] emphasized their neoplastic nature and proposed the use of the term inflammatory myofibroblastic tumor rather than inflammatory pseudo tumor. Other differential diagnoses include soft tissue sarcomas, gastrointestinal stromal tumors, lymphomas and other miscellaneous tumors. There is only one case report so far after deceased donor liver transplantation (DDLT).

In our case, multiple preoperative biopsies were not confirmatory and led to delay in treatment. Final excision biopsy was subjected to extensive evaluation with IHC panel which included c-KIT, ALK, CD117, CD 45, CK-7, neuron specific enolase, chromogranin, alpha fetal protein, desmin, actin. The tumor in this case was negative for other IHC markers including those specific for hepatocellular carcinoma, cholangiocarcinoma, neuroendocrine tumors, gastrointestinal stromal tumors and lymphomas. However, the tumor had classic characteristics of IMT along with positive IHC for anti-lymphoma kinase. Complete tumor excision is curative in most cases.[7] However recurrence at new sites can be prevalent. Ceritinibis a tyrosine kinase inhibitor accepted for treating tumors positive for ALK.[8] The patient was given ceritinib for 1 year. Follow-up with PET CT at 1 year revealed no recurrence. Hence ceritinib was discontinued. At 2 years, the child is disease free with good graft function.

In conclusion: (1) although IMTs are rare, it is a serious complication after liver transplantation; (2) only one case has been reported in the literature so far after liver transplantation that too after DDLT; (3) in this case report we have described the first case of IMT after LDLT; (4) definitive histologic evidence is essential in their diagnosis and differentiation from other malignant tumors; and (5) IHC based targeted therapy may be helpful as adjuvant.

Doing surgery and writing of this manuscript: N. Selvakumar

Chief surgeon in charge of the case: S. Gupta

Since it is not a study and just a report, ethical approval is not needed as per our hospital policies. 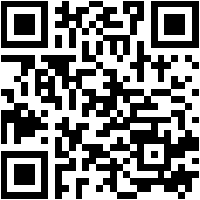