Aim: Early individualization of hepatocellular carcinoma is crucial to obtain good therapeutic results, thanks to several options such as percutaneous therapies, surgical resections and transplant. Aim of this study is to evaluate the vascularization of hepatocarcinoma using contrast enhanced ultrasound (CEUS) in comparison with multislice computed thomography (MSCT).

Methods: Between January 2009 and May 2014, 67 patients affected by hepatocarcinoma, who presented an overall of 92 nodules, were examined and enrolled in the study.

Results: There was a significant difference in the percentage of comparison of the vascularization between the nodules situated at a depth not greater than 9 cm, compared to those studied at a greater depth. In reference to the size of the lesion, the percentage of vascularization to the CEUS in arterial phase, compared with the MSCT, was 84% in lesions with dimensions equal or less than 1 cm, 91% in lesions with dimensions included between 1 and 2 cm, and 96% in the lesions greater than 2 cm.

Conclusion: CEUS is a method capable of documenting with very reliable accuracy the intralesional vascularization of hepatic carcinoma, in a superimposable manner to the MSCT. However, CEUS also presents some limitations, mainly in relation to the site of lesions.

Hepatocellular carcinoma (HCC) is the primitive, most common malignant tumor of the liver accounting for 70-84% of hepatic tumors. The early identification of HCC is very important in obtaining good therapeutic outcomes, thanks to several options such as percutaneous therapies, surgical resections and transplant. Ultrasound examination and measurements of the levels of alpha-fetus protein in serum are the main screening options. Several methods have been used to evaluate the intralesional vascularization of hepatic focal lesions.[1-5] Computed thomography (CT) is the second most common screening option.

The development of second-generation ultrasound contrast media and dedicated software has improved the diagnostic capabilities of ultrasound in the individualization and characterization of focal hepatic lesions,[6-10] as it allows clinicians to study intralesional vascular architecture in real time in all contrastographic phases.[11-15]

Each contrastographic phase has its own specificity, useful in diagnosis; in particular, in the arterial phase, it is fundamental to evaluate the pattern and the grade of vascularization, while the portal and late phase are also useful for the correct diagnosis.

Between January 2009 and May 2014, 67 patients affected by hepatocarcinoma, who presented an overall of 92 nodules, were examined and enrolled in the study. There were 23 females and 44 males with an average age of 68 years, of whom 62 presented a chronic liver disease, while 5 did not present any hepatic symptoms. The diagnosis of HCC was established by confirming the presence of a lesion, which assumed enhancement in the arterial phase with wash-out in portal and late phases. The same parameters were utilized in both contrast-enhanced ultrasound (CEUS) and in multislice CT (MSCT).

The three vascular phases were evaluated: arterial (0-35 s from the injection of the MdC), portal (35-90 s) and sinusoidal (from 90 s to approximately 6 min). Increases in serum levels of alpha-fetoprotein were also evaluated.

The examinations used GE LOGIQ 5 EXPERT and ESAOTE MY LAB equipment with a specific incorporated software designed to work at low mechanical index, with 3.5 MHz convex transducers. The contrast medium in all cases was the SonoVue (Bracco, Italy), consisting of micro bubbles of stabilized phospholipids containing sulphur hexafluoride. This was injected as a bolus in an antecubital vein, followed by an injection of 10 mL of physiological solution. In no case was a second injection of MdC given. Before the intravenous injection, a basal echography of the liver was done in order to evaluate the most suitable ultrasound window to study the lesion. The identified lesion was studied "in real time" up to approximately 6 min from the injection and the enhancement was always compared with the surrounding parenchyma. All phases of the tests were registered on a compact disc (CD) to be evaluated again. In no case were complications manifested.

The examinations used a CT multidetector scanner of GE light-speed (16 and 64 canals). All examinations were done in basal conditions and after intravenous injection of approximately 90-120 mL of MdC, at a 4 mL/s speed. Smart prep was always used for acquisition of the arterial phase.

Analysis of the images

The vascularization of the single lesion, using both CEUS and CT, was classified as hyper-, iso- and hypovascular in each one of the evaluated phases, always in relation to the enhancement of the condition of surrounding parenchyma.

Fisher’s test was used to compare the results of CEUS with MSCT. Furthermore, the results of the vascularization comparing CEUS and MSCT were evaluated in relation to the site and the size of the lesions. A P-value of < 0.05 was considered statistically significant. 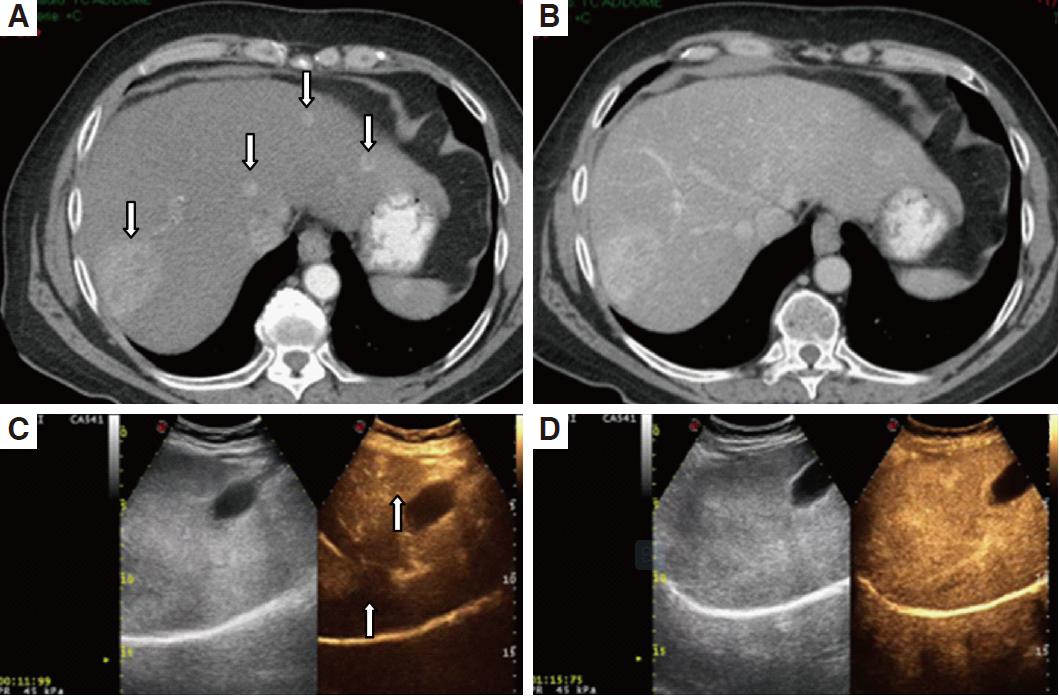 Figure 1. Arterial phase (A, C) and portal phase (B, D) seen in MSCT and CEUS, in the same patient with multifocal hepatocarcinoma. CEUS (C, D) appears in a double image: B mode on the left and contrast enhancement on the right. Both modalities allow a good evaluation of the hypervascularization of the lesions in arterial phase (arrows) and the wash-out in the portal phase. MSCT allows the same scan in the arterial phase (A) to show 4 nodules. CEUS, in its windows in the same phase (C) shows only 2 nodules. CEUS allows an extremely rapid scan of the arterial phase (C) with enhancement of lesions after 11 s since the administration of MdC. MSCT: multislice computed thomography; CEUS: contrast enhanced ultrasound 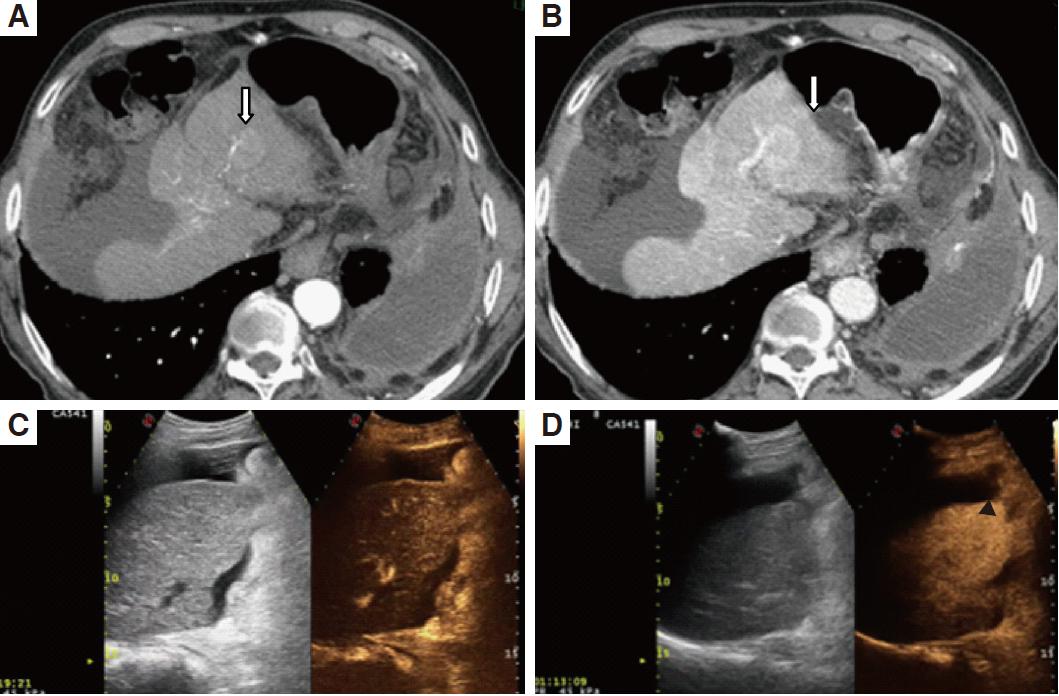 Determination of vascularization using CEUS, related to the depth of nodules 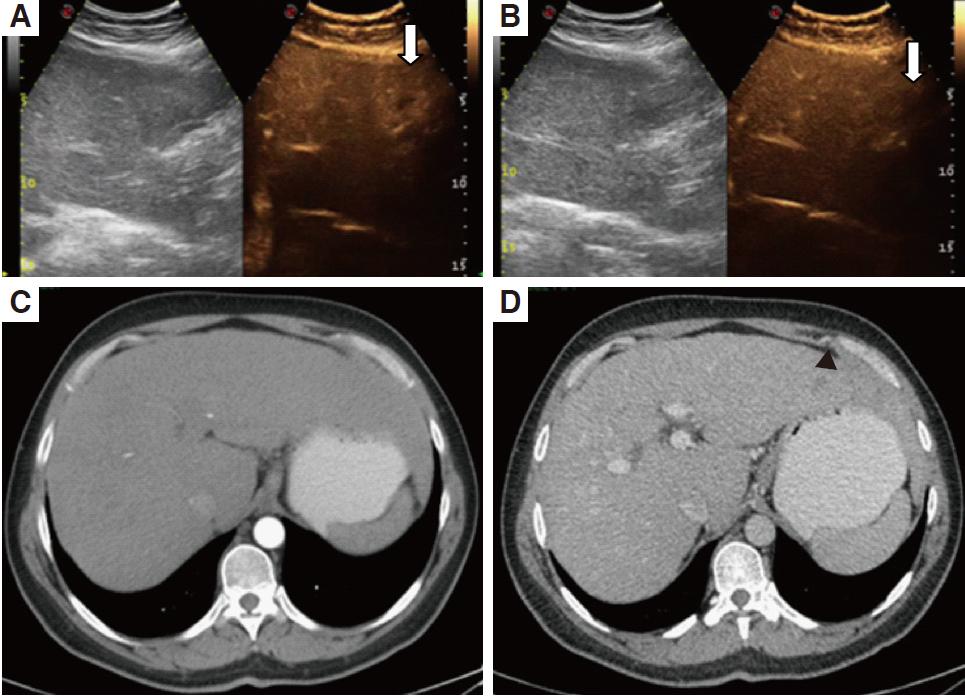 These results showed that there was a significant difference in the percentage of comparison of the vascularization between the nodules situated at a depth not greater than 9 cm, compared to those studied at a greater depth.

Determination of vascularization seen in CEUS related to sizes of lesions

Therefore there was no significant difference in comparing the dimensions of lesions and their vascularization in the arterial phase.

The basic pathology, a chronic liver disease displayed by almost all the examined patients, did not limit significantly the study of intralesional vascularization using CEUS as compared with using CT, particularly in the arterial phase. In the portal phase, the parenchymal enhancement found using CEUS was less intense and more delayed when compared to the enhancement found using CT.

The advent of second-generation echographic contrast media and the generation and development of dedicated software allow clinicians, working at a low mechanical index, to study perfusion in real time and also makes easier the study of small-dimension lesions by considerably increasing the diagnostic capabilities of ultrasound.[16-20]

In the guidelines for management of HCC provided in 2005 by the American Association for the Study of Liver Disease (AASLD), CEUS has been considered among the non-invasive methods able to detect the typical enhancement of HCC. This condition is characterized by hypervascularization in the arterial phase with progressive wash-out of the MdC in the portal and late phases.[21,22] Such contrastographic characteristics demonstrated high diagnostic validity, in various case studies being characterized by a 92-94% sensitiveness and by specificity of 87-96%.

The feedback from typical enhancement with the use of CT or magnetic resonance (MR), methods can be considered conclusive for correct diagnosis. Also, MR, if performed with hepatospecific MdC (BOPTA and/or EOB), can also allow in late sequences (colongiographic) the demonstration of hepatocyte alteration characterized by hypointensity of signal within the lesion, giving further diagnostic evidence of malignancy.

In a multicentric study (DEGUM) with 1,349 patients with focal hepatic lesions identified with basal ultrasound, CEUS was compared with biopsy in 75% of the cases and in the remaining 25% with spiral CT or MR. The diagnostic accuracy of CEUS was 90.3%.[23,24]

Two other, more recent prospective studies (DEGUM) have evaluated the potential of CEUS in the characterization of focal hepatic lesions by comparing CEUS with CT and with MR; in both studies it was concluded that there are not statistically significant differences.[25,26]

In the first study the authors concluded that CEUS must be used first, before using CT; they have also documented that CEUS utilization can considerably reduce the number of diagnostic biopsies.[25]

In this study, a high comparability was demonstrated between CEUS and MSCT, with 88% of nodules appearing hypervascular in the arterial phase using both methods, independently of lesion dimensions.

In this study, there were no statistically significant differences in individualization of vascularization in lesions, in relation to dimensions in the arterial phase. Conversely using CEUS, the evaluation of vascularization in relation to the legion depth was statistically significant. In particular, only 58% of the lesions situated at a depth greater than 9 cm from the abdominal wall presented in arterial phase CEUS, the same vascularization as with the corresponding phase in MSCT; this contrasts with 95% of the lesions situated more superficially.

In this study, the homogeneity of the enhancement was not evaluated because this element can be extremely variable due to a number of factors. Particularly in the arterial phase, inhomogeneity of enhancement is frequently present due to the presence of adipose degeneration or intratumoral necrosis. In the portal phase, a “mosaic” aspect is often noticed, particularly in the larger lesions.[27]

The use of CEUS also allows clinicians to differentiate HCC from other benign or malignant focal hepatic lesions.[28-32]

The intrinsic limitations of CEUS vary in relation to various patient characteristics (cooperation,obesity), various characteristics of lesions (site-dimensions-depth), and the CEUS operator.[33]

Another important CEUS limitation is that the technique focuses study on a single lesion, mainly in the arterial phase, because it can often be particularly challenging to evaluate the enhancement of the entire hepatic parenchyma in a short period of time. By contrast, the panoramic views of CT and MR allow scans to evaluate the entire hepatic parenchyma.

In the 2010 AASLD guidelines for the management of HCC, CEUS was removed from the protocol because it can give false positives in patients with intrahepatic cholangiocarcinoma.[34] However, CEUS is the only method that allows the study of the vascularization of a single lesion “in real time”. Such a possibility provides the advantage of accurately documenting the neoangiogenesis typical of hepatocarcinoma, characterized by the formation of neoartorioles at the periphery and the inside of the lesion that can be enhanced at a very early stage. Furthermore, in some cases (mainly in small-dimension lesions) such precocity can be transitory and thus assessable only in a continuous view.

Some studies have demonstrated that a certain number of lesions, varying between 5% and 25%, remain undetermined after a CEUS study, because they do not present a characteristic enhancement.[28-30] This number can be reduced, even if not in a significant manner, if a second method of CT or MR is added to CEUS for the study of vascularization.

In our study the sensitiveness, specificity and accuracy of CEUS in the diagnosis of HCC were not evaluated. The intralesional vascularization documented with CEUS compared with that documented with MSCT was respectively compared in a series of hepatic carcinoma. The MR was not documented for comparison because it is not utilized in all cases.

In the event, when using various imaging techniques, when it is not possible to obtain a differential diagnosis between a benign or malignant lesion, it is essential to perform biopsy or monitoring of the patients, depending on the dimensions of the lesion.

In conclusion, this study demonstrates that CEUS is a reliable and accurate method for documenting the intralesional vascularization of hepatic carcinoma, in particular when combined with MSCT. However, CEUS presents some limitations, mainly in relation to the site of lesions.

Each patient was informed of the study and gave their consent.

This study was approved by the Corporate Ethics Committee.