Aim: Extracellular matrix (ECM)-adhesions and their interaction with actin cytoskeleton are fundamental for hepatocellular carcinoma (HCC). Fascin-1, an actin-bundling protein, is correlated with poor HCC prognosis, and is known regarding the molecular mechanism of its action. In this study, the authors investigated Fascin-1 basic molecular mechanism and cellular properties in HCC cells.

Methods: Fascin-1 was silenced by small interfering RNA and the expression of actin. The ECM-adhesion-related proteins were assessed along with the cells’ adhesion capacity in two cell lines that differ in terms of aggressiveness; the hepatoma cell line PLC/PRF/5 (Alexander) and the highly invasive HCC cell line HepG2.

Results: This study shows that Fascin-1 is upregulated in HepG2 cells compared to Alexander cells and when silenced leads to increased cell adhesion only in HepG2, while at the same time is associated with reduced migfilin and vasodilator-stimulated phosphoprotein (VASP) expression.

Conclusion: This is the first study to show that Fascin-1 contributes to a more aggressive phenotype in HCC cells and acts through migfilin and VASP.

Extracellular matrix (ECM), focal adhesions, and their interaction with actin cytoskeleton are fundamental for a number of vital cellular processes such as cell survival, differentiation, development, and tissue homeostasis. This is particularly true for the organ liver as the main parenchymal cells of the liver, hepatocytes, interact to a great extent with ECM, and express a number of focal adhesions and actin-related proteins. Moreover, the fact that ECM and ECM-related proteins are fundamental for liver biology is evident by a number of studies showing how they affect hepatocyte differentiation,[1] survival,[2] and normal liver function.[3,4] More specifically, matrix overlay on primary hepatocytes cultured in vitro inhibits the dedifferentiation that normally occurs due to culturing and maintains hepatocytes in a fully differentiated state.[5] Along the same line, loss of a cell adhesion protein related to integrins (namely, integrin-linked kinase) from mouse hepatocytes in vitro and in vivo leads to increased apoptosis and hepatitis,[2] showing clearly that cell-ECM interactions are critical for hepatocyte survival. Finally, liver-specific ablation of integrin-linked kinase leads to abnormal liver histology[4] and increased liver regeneration capacity,[3] indicating the crucial role played by cell-ECM adhesion proteins in liver structure and function.

Moreover, ECM plays central role during carcinogenesis in the liver, as hepatocellular carcinoma (HCC) is known to result from a series of events which include fibrosis, cirrhosis, generation of phenotypically-altered hepatocytes, and dysplasia ultimately leading to HCC.[6] Thus, cell adhesion proteins that connect cells to the ECM and/or to neighboring cells are evidently fundamental for HCC development and progression. Moreover, cell adhesion proteins are often directly or indirectly connected to actin cytoskeleton creating a network of interacting proteins that is crucial for tissue homeostasis. Interestingly, most of these proteins are found to be deregulated in cancer and cancer metastasis.[7,8] This deregulation destabilizes cell attachment to the surrounding ECM and neighboring cells, thus facilitating cancer cells dissociation from the original tumor mass and invasion of surrounding tissues, and ultimately leads to metastases formation.

Fascin-1 is an actin-bundling protein that is found in membrane ruffles and stress fibers, and its expression has been shown to be greatly increased in many transformed cells[9] and a spectrum of cancers such as breast cancer, colon cancer, pancreatic cancer and prostate cancer. In HCC in particular, Fascin-1 has been correlated with poor prognosis.[10]

Moreover, Fascin-1 has been suggested as a novel marker of HCC progression and a significant indicator of poor prognosis for HCC patients.[11] However, little is known regarding the molecular mechanism of its action. In a recent work, we have shown that Fascin-1 is negatively regulated by migfilin,[12] a novel cell-matrix adhesion protein known to interact with vasodilator-stimulated phosphoprotein (VASP),[13] and is localized both at cell-matrix and cell-cell adhesions.[14]

In the present study, we tested the expression and molecular mechanism of the action of Fascin-1 in two liver cell lines that differ in terms of aggressiveness; the hepatoma cell line PLC/PRF/5 (Alexander) and the highly invasive HCC cell line HepG2.

Both Alexander and HepG2 cells were treated for 48 h with 100 nmol/L small interfering RNA (siRNA), non-specific control (NSC) siRNA, or siRNA against Fascin-1 using the Lipofectamine 2,000 transfection reagent (Invitrogen, Carlsbad, CA, USA) according to the company’s guidelines. The siRNA sequence used to silence Fascin was as purchased from Santa Cruz, while the sequence 5’AAA CUC UAU CUG CAC GCU GAC3’ was used as NSC. Silencing efficiency prior to every experiment performed was tested by western blot.

Anti-β-actin antibody (Sigma-Aldrich) was used as loading control. Antibodies VASP and Fascin-1 were purchased from Cell Signaling. The monoclonal antibody against migfilin was kindly provided by Dr. Chuanyue Wu (Professor at the University of Pittsburgh Medical School, Pittsburgh, PA, USA).

Cell adhesion assay was performed as described previously.[13] Briefly, cells were transfected with a control NSC siRNA or siRNA against Fascin-1. Forty-eight hours post-transfection, 104 cells/ well were seeded in 6 wells of a 96-well plate pre-coated with 0.1% gelatin. After a 60-min incubation at 37 °C, three of the wells were washed three times with phosphate-buffered saline while the remaining three were fixed with 4% paraformaldehyde (PFA). Washed wells were also fixed with PFA and then cells in all wells were quantified using crystal violet.[13] Crystal violet was washed using ddH2O and cells were solubilized using acetic acid. Absorbance was measured at 570 nm using Perkin Elmer EnSpire plate reader (Waltham, MA, USA). Adhesion was presented as the ratio of the absorbance at 570 nm of adhered cells (washed) divided by the absorbance at 570 nm of the total seeded cells (not washed). The data from two independent experiments were analyzed using the Student’s t-test. P < 0.05 was considered statistically significant. 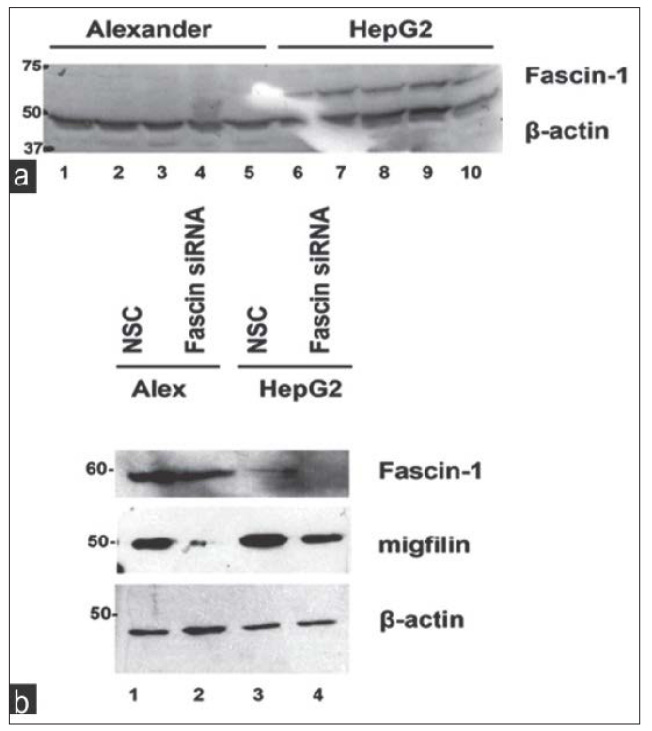 We then proceeded with knocking down Fascin-1 gene in both HCC cell lines to better understand its function as well as its effect on known ECM-related proteins. As shown in Figure 1b, Fascin-1 was successfully silenced in both cell lines transfected with Fascin-1 siRNA compared to the cells transfected with an NSC siRNA (compare lanes 2 and 4 with lanes 1 and 3).

As ECM and actin cytoskeleton are fundamental for HCC progression and aggressiveness, we tested the expression of focal adhesion proteins migfilin (also known as Filamin Binding LIM-protein-1) a novel LIM domain-containing protein present both at cell-ECM,[15] cell-cell adhesions,[14] and VASP, a focal adhesion phosphoprotein known to regulate actin polymerization.[16-18] Interestingly, migfilin and VASP interact with each other and are implicated in cellular adhesion to ECM as well as migration.[13]

As shown in Figure 1b, migfilin was significantly downregulated upon Fascin-1 silencing indicating a connection between the two molecules. Interestingly, in addition to migfilin, VASP was also found to be downregulated [Figure 2a] following Fascin-1 knock-down, engaging both proteins in Fascin-mediated effects. 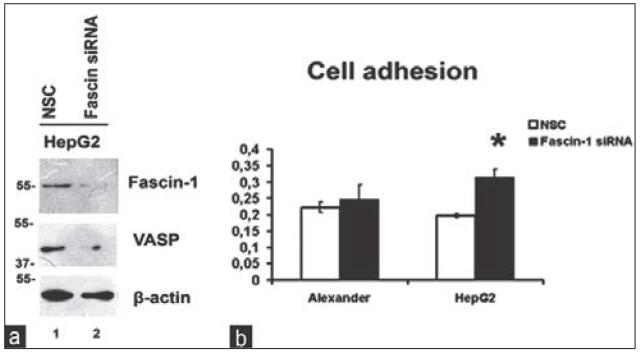 Since both migfilin and VASP played significant roles in cell adhesion, we next investigated whether Fascin-1 silencing affected the property of cells to adhere to ECM. Thus, we performed a series of adhesion assays on 1% gelatin in both cell lines using cells that were transfected with NSC or Fascin-1 siRNA. As shown in Figure 2b, inhibition of Fascin-1 expression by siRNA induces an increase in cell adhesion ability of HepG2 cells, whereas this is not the case for the less invasive Alexander cells, which remain unaffected.

Cell adhesion proteins connecting cells to the ECM and/or to the neighboring cells are often interconnected to the actin-cytoskeleton and this network of interacting proteins is fundamental for tissue homeostasis while at the same time being deregulated in cancer and cancer metastasis.[7,8] Fascin-1 is an actin-bundling protein that is found in membrane ruffles and stress fibers.[19] The expression of Fascin-1 is greatly increased in many transformed cells, as well as in specialized normal cells including neuronal cells and antigen-presenting dendritic cells. A morphological characteristic common to these cells expressing high levels of Fascin-1 is the development of many membrane protrusions in which Fascin-1 is predominantly present.[9] Recent studies show that Fascin-1 also localizes to invadopodia, membrane protrusions formed at the adherent cell surface that facilitate ECM invasion, thus providing a potential molecular mechanism for how Fascin-1 increases the invasiveness of cancer cells since Fascin-1 expression is upregulated in a spectrum of cancers such as breast cancer, colon cancer, pancreatic cancer, and prostate cancer.[20,21] In HCC, in particular, Fascin-1 has been correlated with poor prognosis.[10]

In fact, Fascin-1 has been recently introduced as a migration factor associated with epithelial to mesenchymal transition in HCC cells facilitating their invasiveness in combination with matrix metalloproteinases.[22] Moreover, it has been suggested to be a novel marker of progression in HCC and a significant indicator of poor prognosis for HCC patients.[11] However, little is known regarding the molecular mechanism of its action.

In this study, we tested the expression and molecular mechanism of action of Fascin-1 in two HCC cell lines that differ in terms of aggressiveness; the hepatoma cell line PLC/PRF/5 (Alexander) and the highly invasive HCC cell line HepG2. Interestingly, we show that Fascin-1 is dramatically upregulated in HepG2 cells compared to more benign Alexander cells [Figure 1a].

We then utilized a siRNA-mediated silencing approach to knock-down the Fascin-1 gene. Fascin-1 silencing led to a reduction in the expression level of two important focal adhesion proteins related to the cytoskeleton, namely, migfilin[14,15][Figure 1b], and its interactor VASP [Figure 2a].[13]

More importantly, Fascin-1 silencing led to significantly increased cell adhesion in the highly invasive and aggressive HepG2 cells [Figure 2b] but had no effect on the less invasive Alexander cells, indicating that Fascin-1 silencing has, indeed, a great impact on more aggressive cells. Furthermore, the fact that it results in elevated cell adhesion in HepG2 cells shows that Fascin-1 depletion stabilizes cell-ECM adhesions leading to a less aggressive cancer phenotype. These findings are evidence confirming previous studies showing the potential of Fascin-1 as a therapeutic target for metastasis.[9]

The fact that Fascin-1 silencing leads to migfilin and VASP downregulation and increased adhesion indicates that Fascin-1 may regulate migfilin and VASP and/or be physically associated with them. This evidence further complements recent work from our laboratory showing that migfilin silencing, among other things, reduces VASP expression, and leads to Fascin-1 upregulation, and promotion of cell adhesion in HepG2 cells.[12] Therefore, the evidence clearly indicates a molecular interplay between the three proteins, migfilin, Fascin-1, and VASP, and the potential existence of a regulatory feedback loop in HCC cells.

Although our study was performed in cancer cell lines, which have their limitations in terms of modeling the physiological complexity of human cancer, it still offers significant insight into the molecular mechanism by which Fascin-1 is implicated in HCC pathogenesis. Of course, more studies are needed to decipher the exact sequence of molecular events taking place and the importance for HCC progression.

We are grateful to Dr. Chuanyue Wu, Professor at the University of Pittsburgh Medical School, Pittsburgh, PA, USA for providing us with the anti-migfilin monoclonal antibody.

This study was supported by the European Association for the Study of the Liver Sheila Sherlock fellowship 2012. 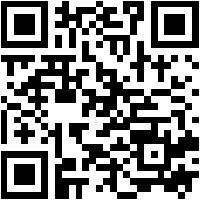