Resection of hepatocellular carcinoma after combined treatment with transarterial chemoembolization and sorafenib: a case report and literature review

Hepatocellular carcinoma (HCC) with inferior vena cava (IVC) invasion and metastatic lymph node metastases has a poor prognosis, and surgical resection is seldom indicated. We report how an initially unresectable HCC in a 36-year-old Chinese male with distant lymph node metastases and tumor thrombosis in the IVC was successfully downstaged and ultimately resected together with the IVC. After the disease had been downstaged, curative resection of the tumor and IVC was conducted with immediate reconstruction of the IVC. The patient has survived for more than 2 years after the surgery. In conclusion, tumor and IVC resection can cure metastatic HCC after downstaging treatment combining sorafenib and transarterial chemoembolization.

There have been a few studies documenting the survival benefits of treating unresectable hepatocellular carcinoma (HCC) with sorafenib,[1,2] but randomized trial documenting the efficacy of sorafenib as a neoadjuvant therapy is lacking. Sorafenib impedes angiogenesis and induces apoptosis with efficacy,[3,4] whereas transarterial chemoembolization (TACE) is a potent stimulator for angiogenesis.[5] Theoretically, the combination of sorafenib and TACE should has a synergistic effect.

A 36-year-old Chinese male had painful hepatomegaly for 2 weeks. He was tested positive for hepatitis B surface antigens and his alpha-fetoprotein (AFP) level was markedly high at 8,195 ng/mL. Computed tomography (CT) conducted in July 2011 showed a 9.7-cm HCC in his right liver lobe, with direct invasion of the retrohepatic inferior vena cava (IVC). There was also an evidence of lymphadenopathy at the porta hepatis and in the para-aortic region. In view of the extrahepatic involvement, HCC was considered unresectable. The patient was put on sorafenib (400 mg, twice a day) and entecavir. He developed tolerable Grade 2 adverse drug reaction (diarrhea and hand-foot syndrome).

One dose of TACE was given in August 2011. Reassessment CT in October 2011 showed interval decrease in the size of the tumor to 5.9 cm, but there were still lymph node metastases and tumor thrombus in the IVC. His AFP level had dramatically lowered to 50 ng/mL. The tumor further reduced in size on subsequent CT in February 2012; however, the AFP level slowly rebounded to 430 ng/mL. Two more sessions of TACE were given in April and July 2012 [Table 1]. Whole-body dual-tracer (11C-acetate and 18F-fluorodeoxyglucose) positron emission tomography and CT performed in September 2012 confirmed resolution of metastatic lymphadenopathy, but IVC tumor thrombus and the adrenal invasion were still hypermetabolic [Figure 1].

In order to achieve complete resolution of the disease, surgery was offered. Pre-operative assessment showed that the liver function was satisfactory for a major hepatectomy (with a 6.6% indocyanine green retention rate at 15 min), and there would be an adequate left-liver remnant. Laparotomy was conducted in October 2012. The tumor was found to have infiltrated to the right adrenal gland and the whole length of the retrohepatic IVC. The left liver lobe had an adequate volume and was free of tumor. The right lobe, the caudate lobe of the liver, the right adrenal gland, and the IVC were resected en bloc [Figure 2]. Immediate reconstruction of the IVC was performed using a cadaveric vein graft (5.5 cm long, 2.5 cm wide) [Figure 3]. The entire operation lasted 10 h and the total IVC cross-clamping time was 1 h. There was 1.2 L of blood loss. 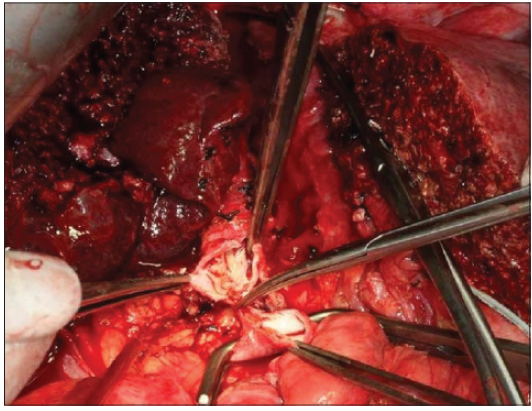 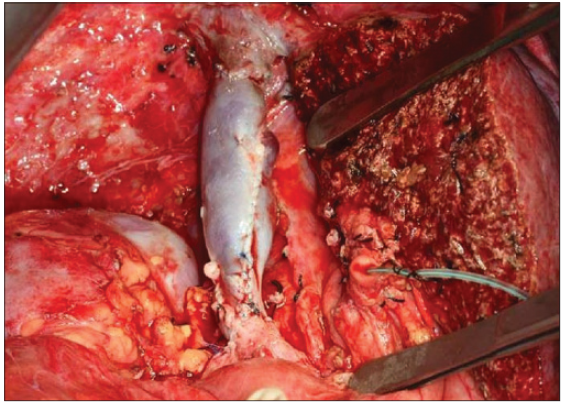 Figure 3. Reconstruction of the inferior vena cava with a cadaveric vein graft

After the operation, the patient was put on everolimus (1 mg daily). He was discharged 12 days after the operation. Histopathological examination of the resected specimen showed necrotic tumor in the right liver lobe and viable metastatic HCC with the involvement of the right adrenal gland. No viable tumor was seen in the IVC thrombus. The patient was followed-up every 2 months after the operation and had remained free of disease (radiologically and biochemically) for more than 27 months at the time of writing this manuscript.

At the beginning, the treatment was meant to be either palliative or neoadjuvant, depending on the radiological and biochemical responses. Ultimately, mixed responses were observed. Disease at the metastatic lymph nodes regressed and the AFP level rebounded substantially over a period of time after treatment. Aggressive surgical resection was offered, and major vascular resection was needed for a potentially curative resection. Sorafenib was continued as an adjuvant therapy. It is hoped that the efficacy and safety of sorafenib in adjuvant treatment of HCC after potentially curative treatment will be demonstrated when the results of the STORM (sorafenib as adjuvant treatment in the prevention of recurrence of HCC) trial are released. A recent German multi-center Phase II trial showed that the combination of TACE and sorafenib could achieve a 74.4% disease control rate according to the criteria set by the European Association for the Study of the Liver. Among the 43 patients, 7% had a complete response, 41.8% had a partial response, and 25.6% had stable disease.[6] Downstaging by sorafenib alone was reported in two case reports and both eventually underwent curative resection. The histopathological examination of the resected liver showed 35% and 60% of tumor necrosis, and the rightportal branch thrombi were totally necrotic.[7]

Although successful downstaging is an uncommon occurrence, a multidisciplinary approach in the management of HCC is essential in the modern era. When a tumor is downstaged to a potentially resectable one, early input from urgeons will definitely lead to earlier surgical treatment if it is possible.

A high pre-operative AFP level has been found to be associated with a higher rate of HCC recurrence,[8] and thus this patient has been put under intensive surveillance. By far, the operation was the only chance of cure for him.

In conclusion, combined treatment can downstage initially unresectable HCCs to resectable ones in selected patients. Patients with the best chance of good outcomes should be given vigilant reassessment with fine-tuning of treatment options throughout the whole clinical course. Center experience in liver transplantation can help in complicated procedures such as major vascular resection and immediate reconstruction.